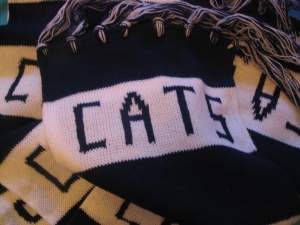 Yes, I’m jumping on the bandwagon. I’ve been a Geelong Cats fan for a long time, though it’s years since I’ve been to a game.

From what I can see, most years they do well in the first few rounds, then descend into a plumetting spiral of defeats. But not this year. They haven’t won every game, but they’ve finished on top of the ladder, and thumped North Melbourne in the first week of the finals. (Oh, do we not call them “North Melbourne” anymore?)

It would appear that the Cats have a fighting chance of winning the Premiership for the first time since 1963. (Hey, when did they stop calling the home ground “Kardinia Park“?)

So enthused am I by the prospect of a Cats Premiership that I’ve gone and bought myself a scarf. Okay, so I didn’t splurge for an official AFL scarf. No, I got a $5.50 “unauthorised” scarf (it has a sticker saying so) that I found at a discount shop down the street.

Marita asked me to get her a Bombers one. It looks like they’ve got away without having to subtly alter the colours or spelling, on condition of the disclaimer sticker. No doubt if they’d lost a trademark challenge, they would have had me supporting the Catts, and her the Bumbers. Or something like that.

Tell you what — if the Cats win the next final, I’ll buy a beanie too. Maybe even a (gasp) jersey. Like a real, authorised one, so the club gets some money from it.

Just don’t ask me who all the players are… (Hey, why do we have a coach with the nickname “bomber”?)

PS. Trish won the Footy Tipping this year, and consequently will take home the Ugly Trophy for the year. Lucky Trish.

11 replies on “Jumping on the Cats bandwagon”

Daniel
as a hapless Melbourne supporter, I am barracking for Geelong in the finals. Well, any Victorian team really (except Collingwood!)
PS Your name was mentioned on 3AW breakfast this morning in relation to Harry Connick, Jr’s 40th birthday today. The connection? Connex/PTUG of course!
Rog.

I have gone to more matches this year that I have for a long long time. I still have a smile on my face after last Saturday’s demolition. I will be devestated if we don’t win the grand final and am trying to “keep a lid” on my enthusiasm too. I go with my 71 year old mother who used to take me to games when I was knee high to a grasshopper. I can even remember seeing Farmer and Goggin perform their magic on the “G”. The best game of football I have ever been to was the 1989 grandfinal even though we lost. To see Gary Ablett Snr kick 9 goals in a losing side even brought a tear to my eyes after the game.

I have bought a beanie and a blanket from the GFC direct this year as I wanted to know they would directly benefit from that so I hope you do buy your beanie from them also.

i’m keeping a safe emotional distance from the whole thing at the moment… still can’t quite believe they’ll go all the way, though they’ve played so well all season.

lyn, that 1989 grand final was why i started supporting geelong in the first place – i felt so sorry for them after the game! (well, that and i liked the colour of their shirts. pretty).

He he, good for you. I’m a self professed out of the closet crazy for AFL fan…and a Bomber’s supporter.

I also like the idea of ‘Bomber’ coming back to us where he belongs after you guys win (or not) the premiership!

I do hope the Cat’s win, but finals footy is a totally different ballgame (no pun intended!)

My housemates are not so rapt with my win now that they have been shown the prize… Umm, where to put it for a year? Any suggestions greatly appreciated!

In the roof, in Trish’s room, at her work… or somewhere that we don’t have to look at it! (Gathered from a glance at the pic on a computer screen from 2 metres away!)

As holder of the prize for season 2006, I’m prepared to impart my secret. I kept it on top of my wardrobe totally out of sight. It’s probably quite dusty – be warned Miss Trish!

I wish your Cats success. Having a long-suffering Geelong-supporting father who was gutted by Grand Final losses in `89, `92, `94 and `95, I am hoping for his sake the Cats can at least make an appearence in three Saturday’s time.
Kardinia Park has undergone several name changes since selling off naming rights in the mid 1990s – I think you’ll find it was 1997 when it became Shell Stadium.
Carna Blues!

Please! Can anyone but one of those South Australian teams please win the flag or better still not even play in the final this year.