We went up to the snow on the weekend. Myself, the kids, cousin Leo, and cousin Leo’s dad Adrian. Five blokes on a snow trip.

The great thing about going to Mt Donna Buang yesterday was there was plenty of snow.

The bad thing about going to Mt Donna Buang yesterday was that lots of other people had the same idea. 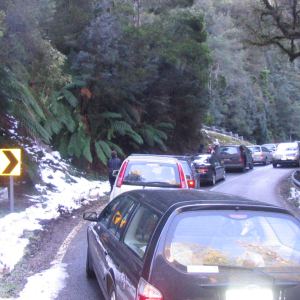 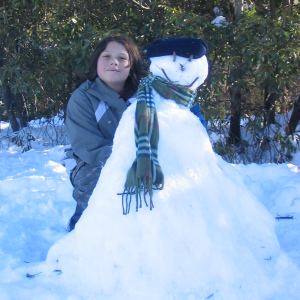 This became apparent when we got through Warburton and saw one of those highway signs saying there’d be long delays. They weren’t lying; we probably queued for at least 45 minutes on the mountain road, while the rangers waited for people to come down. They said Lake Mountain was even more packed. We used the time to eat lunch, stretch our legs and throw around a bit of the roadside snow, and to use the handily-placed toilets.

After the delays, we finally got to the mountain itself, put on the cold weather gear, hired some toboggans, and off we went. The last report I saw on Friday said 30cm of snow, and it was probably still a similar amount. The sun came out and we frolicked with half the rest of Melbourne on the summit. Even Leo was eventually convinced to take a toboggan ride, and funnily enough we unexpectedly met a bunch of his little friends and their parents up there.

Then we tried the toboggan runs. It was perilous; the snow in that area had been compacted by the feet of a weekend of visitors, and it was really slippery. I kept falling over and barrelling into complete strangers; then they into me.

Jeremy’s toboggan went off on its own at one point, but was found by a friendly passer-by. After he had a (rather too fast) slide down, while climbing back up he found his hands frozen (he’d taken his gloves off) and was almost unable to move without falling over. Not happy. 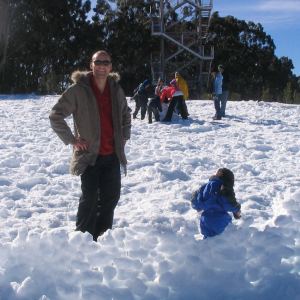 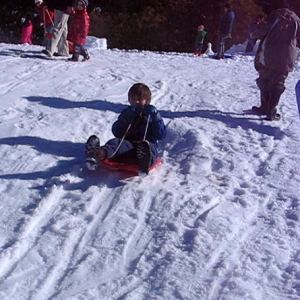 Isaac at one point found himself on the ground next to his toboggan, but it was so slippery at that spot he was unable to climb onto it without a struggle. Eventually he slid down on it, then climbed back.

We gave up on the run at that point and climbed back to the summit, which in the circumstances was altogether a more enjoyable spot. Eventually we’d had enough, and climbed back down to the carpark, with (I think) almost everybody falling over at one time or another. A little bit painful, that.

We returned the toboggans (you know, I’m not absolutely positively certain that I paid, but the guy assured me I didn’t owe anything) and got some hot food for the walk back to the car and the drive back.

Halfway back I realised I had something of a damp bum.

All in all, a great day out. Well, apart from the tumbles.

Perfect timing Daniel, as I am planning to take my kids up to Donna Buang in the next few days. We took my oldest up there once before, a couple of years ago, and for the youngest it will be her first time.
Nothing serious (build a snowman, slide down the slope, throw snowballs, fall over), but it will give them a chance for a new life experience. Should be fun.
Hope our weather is as nice as what you had (judging from your photos).

I have started to make it a yearly thing with my young-un. We try and pick one of the more child-friendly mountains, like Lake Mountain, or Baw Baw.

Last year was a bit lame at Baw Baw, and everywhere else for that matter, but this year looks to be a bumper season, so should be good fun.

Also can’t beat the hot chocolate at the end of the day, sitting in the sun at one of the caf’s on the mountain.

Looks like grand fun! Might as well enjoy the snow while you’ve got it. Would love some about now, as the temps are in the high 20’s, with mid 30’s predicted for the middle of the week. Ahhhh, for some cold, dry weather, and some snow to walk through. But, that’ll come in about 6 months or so, for us.

Nice snowman, and very stylish with the scarf, I must say. :)

i was thinking of hiring a car and going up there in a few weeks… a friend of mine has never seen snow and since i cant bring myself to ski in australia after a season in canada i thought tobogganing might be fun!

how much did/would you pay for the day up there?

Lol! I was in Warburton this weekend for a girly weekend and we guessed if the number of people in the main street of town was any indication, the mountain traffic must be horrendous. I went up today for a look, and it was very quiet, but the evidence of the busy weekend showed in the compacted icy snow and sludge.

Reminds me of when I was a kid in Los Angeles and my parents would take us up to Frazier Park (around 60 miles from where we lived in the San Fernando Valley) to see snow.

Now I live where we get a few inches of snow at the house a couple of times a year.

Snow’s neat… when you aren’t fishtailing down a dark suburban road, trying to get home from the Park & Ride (big parking lot where you can catch buses).

Our best ever family day was on Mountain Lake – we went mid week and found a toboggan slope that no one was using. We had it to ourselves for quite a while – at least no one else could see me falling on my bum all the time!!!

Any chance you could put some of that snow in a box and send it to Europe? A couple of days ago we had about 40 degrees in Vienna and it isn’t much better now. Funny thing is that we had a bunch of Aussie visitors in the middle of it, too. It somehow felt right.