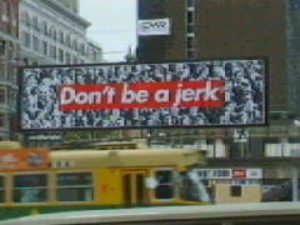 It’s been a while since I’ve been to church, but on Sunday I found myself at an Anglican service, for a christening.

I think if you had to sum it up briefly, that kind of mild suburban Christianity could be best described as a 2000 year old advertising campaign to try and get people to be nice to each other.

A lot of the service (which included the parable of the Good Samaritan) talked about loving God and being nice to people, and if you do that, you’ll get eternal life. Sometimes I wonder if a lot of religions weren’t based in part around using bribery to try and convince people in those wild and ancient times to stop chopping each other up and to be a bit more civilised.

I wonder though, if one were promoting such a message today, how would you do it? I’m betting that to reach the bulk of the population, you wouldn’t do it by setting up a weekly meeting (especially on a Sunday morning) in a big old building and getting people with robes to light candles, talk and sing about your message.

Music – a great Christian artist by the name of Paul Colman comes from your fair city Melbourne :) He, sadly, had to move to the States in order to make a living at his music. He’s now part of the “Newsboys” which are a large Christian group based in Nashville comprised of 3 Aussies, and 1 token American.

But yes, you’re right, to appeal to modern people you have to get them to pay attention in different ways. I’ve seen ads on buses, and on stops saying ‘Don’t worry about what you’re wearing. Sandals and a robe was what Jesus wore. Just come and say hello to your neighbour.’ That’s the idea they need to promote more – a less stuffy place that indeed is good to meet your neighbours, and friends.

Can I say oddly enough that it’s through the net of all places that I’ve become more sure of my feeling that religion has a place in my life? By talking to a young Aussie guy, of all people (laughs out loud here). Well, when it came right down to it, who would I ask for help if in a crisis my house was washed away, my car gone, and all I had was my family, and the clothes on my back. God, of course. Well, if I’d call to him in a time of crisis, why not in good times? See, that logical thinking got me going on the path of yes, church is good for me.

Hope this helps somebody out there.

The fringe churches advertised incessently on WA regional commercial TV in the 80s. Maybe they were e freebies to meet their religious content quota, most of the being made up by Jimmy Swaggart imports accompanied by a request to send donations to a PO box in Qld.

The ‘being nice’ theme was popular then as well.

The Mormons had as one of their ad themes was improving communication between parents and teenage kids. You could send away for a free board game called ‘Bridges and gaps’, designed to improve intergenerational communication.

The Seventh Day Adventists (?) had a theme of ‘you need a hand’, with video clips of neighbours giving help to each other.

I think you’ve missed the point a little, Daniel:
Organised religion has been a tool of despots and dictators from the dawn of time, to control the masses.

Think about this: How would thousands (millions?) of citizens allowed their leaders to live luxuriously while they toiled all day just to feed themselves? Why wouldn’t they revolt? Think Egypt, Rome, Mongolia etc…

I reckon it’s because those leaders somehow convinced the populace that they had the “ear of god”, and could call down some kind of un-earthly “furious anger” from the heavens to smite the unfaithful.

Throw in a little glitz, glamour and maybe even sleight of hand, and you might even have convinced ME in those times…

And if it’s as easy as “being excellent to each other”, why did we have to be threatened with fiery pits, wailing and all those gnashing teeth for the last 2000 years?!!
It’s easy to “prove” being nice makes life easier…

Matt, true enough, but that’s why I specified that kind of mild suburban Christianity, eg what you see in most churches today. There’s all kinds of nastiness tied up with other parts of that religion and others.