I’m relatively used to seeing my name in the newspaper, but most of the time I know it’s coming (like this morning) and I know it’s going to be in a particular context.

So when my Google News RSS Feed (surely a sign of a healthy ego) showed up Virginia Haussegger’s article yesterday, 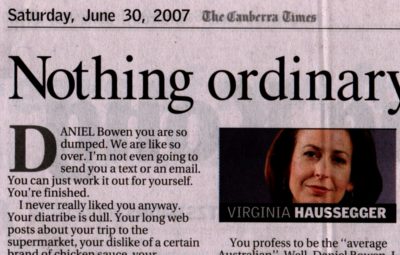 I looked at opening sentence: “Daniel Bowen you are so dumped” and assumed it was about somebody else with the name.

But still, I clicked through and read it. It wasn’t about someone else, and that’s I think what surprised me the most. Unexpected and totally out of context to what I’m used to, which made it feel rather odd reading it. Like Sam Tyler in Life On Mars when the people on TV talk to him.

Obviously she’s just tried to get an interesting angle on the Census figures that have started coming out in the last few days, gone Googling for “average australian” and found me — to my surprise (and apparently hers) I’m the top hit, above the Census itself. Judging from what she wrote, it’s doubtful that she was really reading for very long.

Is it overly critical of my blog? Well, it may seem that way to people who know me, but she’s just having a little rant, and it’s aimed at me because of my choice of the word Average. But 99.99% of the people who read it wouldn’t have visited here, so I doubt they batted an eyelid.

All in all, I’m pretty amused by the whole thing.

Hey Virginia: you’re probably not my type either.

DANIEL Bowen you are so dumped. We are like so over. I’m not even going to send you a text or an email. You can just work it out for yourself. You’re finished.

I never really liked you anyway. Your diatribe is dull. Your long web posts about your trip to the supermarket, your dislike of a certain brand of chicken sauce, your conversion to green energy and CFL globes, your love of Dr Who it’s all tedious. Boring. Juvenile even. I only hung in there because I felt I had to. I felt a sort of moral journalistic obligation to try to understand you.

But now, thanks to this week’s release of the 2006 census data, I’m free of you. I don’t need you anymore. Now I never have to read your tedious web blog diary again.

Bowen, I always thought you were sus. Now I know it for a fact. You are not who you say you are and I’ve got the census data to prove it.

Look, sorry Daniel if I’m sounding a bit shrill. It’s just that I hung in there with you for so long, pouring over your daily musings, trying to get inside your head and work you out. And now I find it was all a useless waste of time. You and I were always worlds apart. But because you claimed top billing on the “average Australian” Google search, I felt compelled to get to know you.

In fact, Daniel, you’re probably not that bad a guy. In truth, your daily rants occasionally made me smile, especially your recent excitement about stocking up on recycled tissues. I even got into your long discussion about what you eat for lunch at work. And you’re probably right about the food court near your office having by far the best “rolls with roast chicken”. It’s just that none of that is very interesting. And now that I know you are not the “average Australian”, I’m relieved that I don’t have to feign an interest in you ever again.

That said, Daniel, it’s not as if you are being replaced by a 37-year-old mother of two, who lives in a “couple family”. Certainly the census has told us that such a person is of “median” age, and reflects the biggest albeit declining demographic. But she is nevertheless not your “average Australian” either. And that’s the point.

Australia has finally come of age. Thankfully, we don’t have an “average Australian” any more. And that’s just as well, because on that score, Daniel, sorry but you were an embarrassment.

Thanks to the census data we now know that the “mainstream” of Australia has moved on. The bulk of Australians are no longer white, Anglo, English-speaking Christians who are married-with-kids. The white picket fence has toppled down.

Consequently, the time has well and truly come for politicians across the board to reconsider their tired old policy pitch to the “Australian family” or “ordinary Australians”, as if the “family” and “ordinariness” is the sum of us. It’s not.

Australia is now a nation of stunning diversity. In fact “diversity” is the new norm.

We come from a range of different backgrounds, with one in five households speaking a language other than English. In fact, 3.2million Australians speak another language on a daily basis. Italian and Greek are still the most dominant, but Cantonese and Mandarin are very close behind. Arabic is also on the rise.

But it’s not just what we speak or eat that makes us diverse. What we believe in, how we structure our households and our choices about fertility and partnership all factor in our growing diversity as a nation.

Thanks to Richard Dawkins, Christopher Hitchens, Andrew Denton and the team at The Chaser, atheism is now the “new black”. These days nearly one in five Australians lay claim to “no religion”. Generation Y is the strongest group of non-believers, with godlessness peaking at age 25. But then, as demographer Bernard Salt quipped this week, “you are never as healthy and as immortal as you are in your mid-20s.”

Despite a rise in the Pentecostal song and dance style of worship, Christianity as a whole is on the decline. Buddhism continues to be Australia’s fastest growing religion, along with Hinduism now. And despite the Muslim population growing by two-thirds, Buddhists still outnumber that growth largely due to increased immigration from China, Korea, Thailand and other Asian nations.

But perhaps the biggest nail in the coffin of the “average Australian” is to do with the more intimate aspects of our lives our partnerships. Or lack there of. There are now more than 4.5million Australians over 20-years-old who have no current partner. For the first time ever, the majority of Australian adults are unmarried: one million more than 10 years ago. There are also nearly half a million more divorced or separated Australians. While the Australian fertility rate has climbed back to a relatively healthy 1.8 babies per woman (although well below the replacement rate of 2.1), childless couples are nevertheless the fastest growing family group. Couples with children still form the biggest sector, but have experienced the sharpest decline. Whereas the single person or “lone” household is dramatically increasing.

And on top of all that, we’re richer than ever, but hocked to the eyeballs in debt, yet much more willing to splurge on ourselves.

Now trying mixing up all those census tid-bits to come up with an “average Australian”. You can’t.

And Daniel no offence. You were just never my type.

“The bulk of Australians are no longer white, Anglo, English-speaking Christians who are married-with-kids”

… and Daniel is a half-Chinese Weak Agnostic who is divorced. It’s funny how people make assumptions.

You are to be commended for such an even handed response. I enjoy reading your daily musings if nothing else because they are “average” rather than fictious or extremist. A worth lesson to many: hold off on hitting send for 24 hours.

i still thought it was rather odd, but i do see your point, as well. i suppose getting an interesting angle on the census is not exactly easy.

Of course I only took offense to the fact that if your entries are dull, then so must your readers be. However on reflection (and with ego in check of course) I’ve decided that as I’m a rather interesting person then you must be too…

(And there are people out there who actually *want* fame? They can have it!)

Good response DB. You appear to have taken it in the spirit in which it was intended. Still, it does prove that op-ed pieces are often less well-researched and carefully considered than many blog postings.

Ooh, harsh Miss Marita! Still, if anyone is going to get away with saying it, it’s either your parents or your girlfriend…

Oh that others might aspire to be as average….

Averageness is something we can all aspire to! Touche, matey! Good response – and thanks for being yourself. Yay! \o/
Cyalayta
Mal :)

Well, I’ll join the crowd and say well done on the mild, even handed response post. Nothing, really, to get too excited about. I think that maybe you’ll see a spike in traffic, then it’ll die down again, with about the same number of average readers as before. That’s the nice thing about the internet: don’t like what you’re reading? Just go elsewhere! :)

Good on you Dan for not giving any ground to that [removed]. Cheers mate.

Some ppl will say anything to make themselves feel good no matter what the effect on you or others not happy unless they are being negative – I suspect another SPOTW.

hausegger is a typical ABC whinging leftie from the carping harpie school of journalism. correction. she ‘reads’ the canberra abc news, so her intellectual input into that probably reaches the level of intellectual rigour she applied to this article.

a man can be judged by who his enemys are.

i’d be glad if this tireseome beson disapproved of me. id hold my head high and traipse down the street whistling a happy tune.

here ears are so distracting that unless her ‘do’ of the day covers them (hard to do) i find it hard to actually pay attention to her shrill voice.

You should sue the bitch for defammation! She is mean-spirited, evil and totally out of line to write those things about you!

Take her to court and tear her reputation to pieces!

Hi Daniel:
She professes to be a reporter but her research is obviously thin as she hasn’t gotten the flavour of your blog at all. Wonder what else she has written? Perhaps she could learn a thing or two if she actually read your blog routinely.
Thanks for all you do, public trans, green everything and have the occasional Violet Crumble for me in America. Stephen in Glendale, AZ.

How odd – I live in Glendale, AZ, too (and I’m pretty sure I don’t know Stephen). Well, I’ve been reading TC since about 1999 and in my considered opinion you, sir, are quite average! >>>Yawn