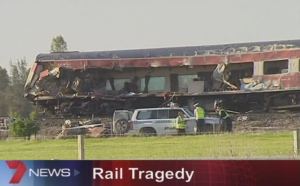 I was upset to read about the Kerang train crash. For all my bitching, I love travelling by train. When it works, it’s clean, cheap, quick, comfortable. And safe — rail travel has a deserved reputation for being one of the safest ways of getting around: about five times safer than by car. Accidents involving the deaths of rail passengers are very rare, especially in Victoria.

Which just makes a multi-fatality rail accident all the more shocking, particularly only just over a year since the Trawalla crash. Obviously there will be investigations as to what happened, but initially it looks like a terrible mistake on the part of the truck driver.

While driver education plays a role, to my mind it’s pretty clear that there need to be upgrades to level crossings. While the Murray Valley Highway isn’t a major highway, it’s busy enough, and protecting trains from B-doubles using just flashing lights and bells obviously isn’t enough.

PS. Wednesday 7pm. You know something bad’s happened when the BBC ring you up: Australia crash highlights safety concerns

I cannot agree. Flashing lights and bells should be enough. Clearly it wasn’t in this case and usually train passengers come off best in these situations. Usually it is the vehicle driver who ends up badly and not the train passengers. Deaths on trains by accidents is minimal. Do we need to put booms on every level crossing in the state? Even if we do, it can still go wrong, as is exhibited by boom gate protected level crossing deaths. How much can society spend to protect us from idiots. Train line, be careful. How hard is that? In case any think I am uncaring, I am not. To get on the safest mode of transport and die should not happen. An investigation needs to be done about why motorists and truck drivers don’t treat railway lines with respect and fear.

It’s a terrible tragedy. My deepest sympathies to those who’ve lost loved ones, and who’ve been hurt. Yes, train travel is generally safe. A tragic accident, all around.

Agree to a certain extent Andrew, but it’s not all about boom gates (which are quite expensive, though the Controlled Crossing proposal appears to get around that). Other possibilities include lower road speed limits at crossings, more signage/warning lights to avoid people missing them and/or not being able to stop in time, speed humps to better prompt drivers to slow down and watch out, adding standard traffic lights (which some drivers seem to be more inclined to notice) and I’m sure there are other possibilities.

A lot more can also be done to move freight off the roads and onto rail.

No doubt this was a terrible tragedy, but I don’t think there’s anything more that could have been done to prevent it, short of having an under/overpass so the rail line and road never actually cross. If the truck driver didn’t notice the bells, lights and oncoming train, I don’t think he would have noticed boom gates, traffic lights or speed limit signs either.

Going by what has been written in the press and on interviews with the surviving passengers, the Driver simply didn’t slow down. he did attempt to swerve at the last second but it wasn’t enough. in this instance, no amount of bells or boom gates would have stopped him. The only virtually foolproof solution in this instance would be an under/overpass of some sort. No doubt the most expensive option.

Even if the lights are off, bells aren’t going and the booms are up, I still slow down and have a look. To put faith in whatever technology is not smart. Regardless of bells and lights, if he’d been travelling slower and had control of his vehicle, this wouldn’t have happened. Sure, you might have to slow down, but that beats getting hosed off the road.

Having done a lot of driving on old highways between Melbourne and Mildura (I now know four separate ways of getting there) and crossed a lot of level crossings in that time (of all varying degrees of safety and warning signs), I have to say that I can agree with the truckies when they say they often cannot see the red flashing lights. You CANNOT see them on a bright day. It’s all but impossible. The new-fangled lights are bright and shiny but many lights on country roads are still the old ones and when you add years and years worth of dust and a bright or glary day… Yeah. This can happen. What makes it worse is that several of these crossings are not straight 90 degree crossings. Awful angles mean that you cannot see very far even when you do take care to look.

It’s been reported that this driver made the same trip on a regular basis. He might have been driving on auto-pilot. The train might have been earlier or later and he simply wasn’t expecting it, thereby missing seeing the lights as he continued towards the crossing.

Having said that, it’s no excuse for not slowing down to check that you will get to the other side of that crossing in one piece anyway. You’re just tempting fate doing anything else.

Dude… the BBC called you?! Please send signed scrap of paper post haste to be added to the “famous people I kind of know” book.

Yes, adding my voice to the above. Wow @ the BBC calling you! Great quote, and yes, keep up the pressure. It’s the only way things get CHANGED sadly. Keep speaking up. Dude, you are famous.

My parents live near that train crossing and I called them the minute I heard because they drive through there several times a week.
My father had often mentioned that crossing as being an accident waiting to happen. As he said, at the time of day in particular, the sun make visibility a real problem and so he avoids it.

I suspect that this was yet another example of “driving whilst sleeping”. From what I could see, the truck driver had come from at least Bendigo (a _very_ boring bit of road) and was facing the sun. Drivers can get into a trance state that allows them to can the vehicle to their bit of road and speed, but with a _long_ response delay to out of the ordinary. This crossing has the amber 200m lights as well.

My suggestion is to add xenon flash lamps, with parabolic reflectors, on top of the existing lights, and on those amber flashing lights that are 200m up the road fit speed sensors and an air horn. If the lights are flashing and there is a vehicle approaching at over, say, 70Kph then there is a blast of sound to alert the driver.
Costs for this are reasonable, and it addresses what I suspect is the cause.

Reports of previous near misses from cars rushing to beat the train are not relevant, as in those cases the driver is aware of the train.