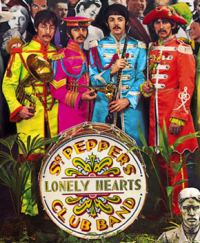 Sgt Pepper was the first cassette I owned, back in the late-70s. It lacked a lot of the non-musical extra bits and pieces of the original release: the cardboard cutouts and lyrics and so on.

At that age I don’t think I really “got” the concept album idea… I seem to recall wondering when and where the concert from the title track was recorded. (Some from a Goon Show audience, apparently!) And I didn’t like Within You Without You very much.

For the Christmas holidays in 1979, we went down to Dromana to stay with friends. They had a record player, and a copy of Abbey Road, and we played it solidly for a week, then bought the cassette when we got back to Melbourne. To this day I probably prefer Abbey Road to Sgt Pepper, even if the latter is better-known for being a mould-breaking revolutionary album. My friend Raoul got me into all the other Beatles albums.

In 1987 I bought the LP record of Sgt Pepper, on precisely the twentieth anniversary of its first release, tying in beautifully with the lyrics. I seem to remember it got up to at least number four in the charts that week. Having it on vinyl meant I was finally able to play that inner groove on the end of side two backwards.

Some of the Beatles albums were available as coloured vinyl at the time: I had a white White Album, and there was a yellow Yellow Submarine. I think there was a red version of Pepper, though mine was plain black. It had all the cardboard cutouts, though not the badges.

A year or two later I got a CD player (which only recently died), and Pepper was one of the first CDs I bought (second only to Abbey Road, I think) — the only letdown being the failure of the medium to deal with where the album segue between songs.

Sgt Pepper has long been one of my favourite albums, though as my musical tastes and collection have widened and widened, it and the other Beatles albums don’t get played very often. I played it last night for the first time in quite a while, and though it obviously reflects its times, it still sounds fresh. These days I like Within You Without You.

4 replies on “It was forty years ago today”

Great album, great band. I’ve always really liked them. I can recall spending serious amounts of time with girl-friends saying which Beatles song fit which person the best. I was “Eleanor Rigby”. LOL I don’t have all the LP’s, nor CD’s but I have the Red, and the Blue Albums on CD, and yes we do play them regularly.

I have to say I’m more fascinated with the “conspiracy theories” about Paul MCCartney death and cover up etc and subsequent album covers of what each represented.

If you’re not sure what I’m on about do a google search on it and there’s a particular site that devotes to it.

Being a tad bit older, I grew up having to listen to the Beatles and still enjoy it, especially watching the Beatle cartoons in the morning before school, where it was like singing karaoke as they had the bouncing ball across the screen to sing along.

Love this album and it really grew in my estimation after hearing a lot of the tracks as part of the Anthology series (the SPLHCB tracks appeared on Anthology II from memory). Good Morning and Day in the Life in particular are stand outs on the Anthology.

You talk about the CD medium not doing much for the segue between songs – I know what you mean, particularly when played back in MP3 format.

Aha! After nearly a week I finally got the title of this post. Don’t blame me, I’m of post-post punk vintage…