My dad didn’t wear ties during the later part of his working life, and certainly doesn’t now he’s retired. So I was taught to tie a tie by Norm, who worked at Hattams in Elsternwick when we bought my first school uniform for Melbourne High, in summer ’84-’85.

I’ve been thinking for a while about switching from a Pratt Knot to a Windsor Knot, the latter apparently resulting in a bigger, more symmetrical knot… even if James Bond apparently declared it to be “the mark of a cad”.

I found clear instructions at Tie-a-tie.net and tried them a couple of times last week. The knot itself is pretty easy actually, just a teensy bit more involved than a Pratt knot. As always, it’s the lengths that were troublesome on my initial attempts, so I stuck with my traditional knot.

But Tony laid down the challenge on Sunday, and that’s finally spurred me into action.

Monday: Day one: Gave the thin end almost nothing at all, and it tied okay with the length about right. The knot is arguably aesthetically better, but not terrific, and I wonder if this works better with a tie that’s thicker, and hasn’t been tied the old way for a couple of years. 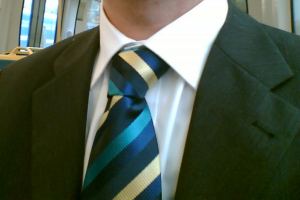 Tuesday: Day two: With my spiffy new silk tie, it works much better, though it took three attempts to get the length right. A nice, big knot, which doesn’t move around. Not quite as symmetrical as one might hope, but a big improvement over the old method. (Mind you, I found it wasn’t quite aligned right when I did a TV interview at lunchtime, but that may have been because it was blowing a gale at the time.)

Wednesday: Day three Okay, this isn’t too bad. I think I’m getting used to this now.

See the challenges us blokes go through to get a tie looking really nice?

Cad. Bah! The Windsor is far superior to the other alleged knot. It looks so much nicer and (as you mention) symmetrical. I can’t stand seeing member after member of various parliaments, business leaders and other people who appear in the media (or in person) wearing ties tied with the inferior knot. I have only ever used the Windsor – even as a 5 year old at a Catholic school in Sydney! Fight the good fight. Bring back the Windsor.

Another vote for the windsor. I don’t wear a tie these days as our office is almost permanently casual for some of us, but when I did it was Windsor. I have done it all my working life, it just looks so much better.

3 cheers for the Windsor, or half-windsor as some call it.

I find the good starting point for correct length is to use the join on the back as a rough indication of where to cross them.

OK that picture is making me crazy. I really want to adjust your tie to the left a little, and straighten out the knot…

My induction (from the office polymath) was to decry my use of the ‘schoolboy knot’ and teach me the Windsor knot. He was right – the Windsor knot was fuller and seemed more comfortable.

However due to a combination of laziness and being a slow learner I couldn’t be bothered.

So the next day I came with a full-knotted tie. A Windsor knot he thought. He was wrong.

I’d simply threaded on a piece of 1/2 inch black irrigation tubing onto the tie (to bulk it up) and tied a schoolboy knot over it. No one could tell the difference.

when anyone complains about my tie technique, I tell them to get knotted…. (sorry!)

All I can say, being a member of the fairer sex ;), is nice tie Daniel, and well done, chap. Actually I did learn to tie a tie on my silly school uniform (went to a private girls school), and do faintly remember trying the Windsor knot. Looks good, as I recall. If you have to wear it, why not go for the nice looking knot?

Peter: That’s funny, though now I’m getting used to it, the Windsor knot only takes an extra second or two.

I really have to suggest a wonderful book for the geek in us all – The 85 ways to tie a tie.

Daniel, I’ve found that a good way to get the length right is to put the thin end of the tie on, or about, the fifth button down, at least to start. I don’t wear ties for work any more, but I got to where I could tie one with my eyes closed.

i made a list of advantages and disadvantages of the windsor over other types of knots and added them up.

I like the Windsor knot, I think that it looks nicer and I have been trying to do with myself with no avail, but I have been wondering do certain shirts call for certain knots or can it be ‘one for all’?

Stuart:
don’t confuse the windsor and half-windsor. I think the “pratt” knot Daniel was refering to may by the half-windsor.

It is the full Windsor that is larger and more even.

I pity a friend of mine who a little tall for the full Windsor with most ties – he generally has to resort to the half Windsor.