It’s great having a phone with a half-decent camera. It’s nowhere near as good as my “real” camera, but because I almost always have the phone with me, I can snap photos anywhere, almost no matter what I’m doing: 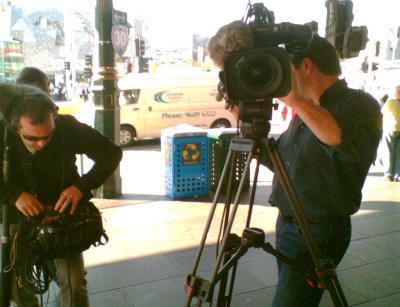 And because a phone doesn’t look like a camera, even dogs of a nervous disposition, such as Maisie and Jake, who believe that cameras can suck out your soul, can be photographed: 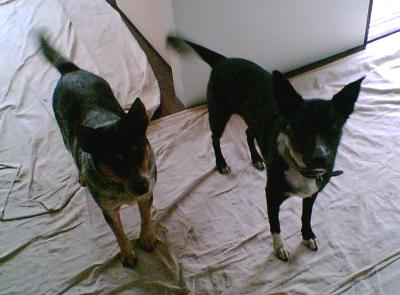 Yesterday this scary looking van was parked outside the Westin hotel in Collins Street. The first time I walked past I was pondering if it might be a disaster recovery crew for computer equipment. Like server failure. But the picture on the side made it look like they might deal with more real-world scenarios. 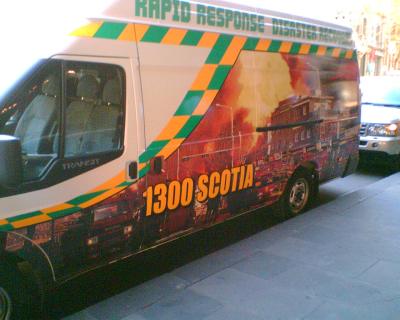 A little later I went down Flinders Lane, which was closed to traffic, and past the other side of the hotel, and found this: 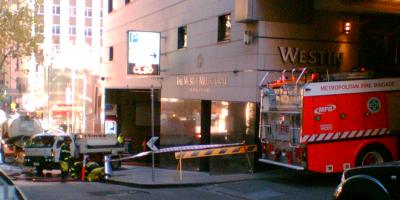 I overheard someone’s conversation which tied in with what I later saw reported on Channel 7… the hotel’s underground carpark was flooded. Whoopsie.

Sometimes the phone camera just doesn’t quite cut it though. This picture might be vaguely amusing if you could read the ACF Fight Climate Change sticker on the back of the 4WD… 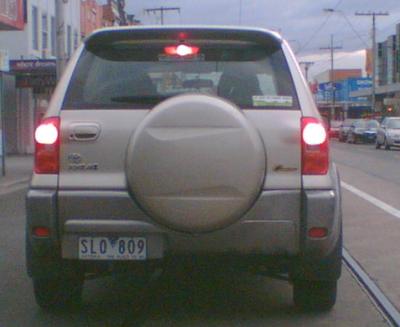 Would you have said the same thing if the sticker was on the back of a Commodore? Because that RAV4 uses less fuel than a Commodore.

Alright already I give in…I searched the ACF webbie, squinted far too hard at the screen and even resorted to a magnifying glass. What does the damn sticker say? And on the topic of the ACF is anyone else apprehensive about just how much they are going to be disappointed by Peter Garret now he is a cog in the party machine?

Philip: I might have been less inclined to notice it, but sure, if I had, it would make an entertaining picture. Any of those grunty cars.

Sometime I might have a rant about deliberately noisy cars, actually.

Lis – are you joking? If I got stuck behind you deliberately drive 20km/h below the limit, I’d probably end up smashing into you (and not necessarily deliberately) . In some countries, drivers are booked for driving too slowly because it is dangerous. The slight savings in carbon emissions will be overwhelmed by the resources required to repair my car and your car. You are joking – right?

Ha, cars have a speed where they are the most efficient – driving slower may just be using more fuel per kilometre. Do your research first!

No, I’m not … the EU has done a study that we can reduce our carbon emissions 20% by going slower … we are in a very serious situation … Australia’s transport emissions are way over target, most of us can’t afford a Prius but we can drive slower. The benefits: lower emissions, lower fuel costs, more lives saved … I might sound crazy but I think all the people who drive too fast (like I always did) are crazy now. Maybe its time for everyone to rethink speed … it’s a small thing to do to protect our children’s futures. PS. I don’t think a 20% saving on carbon emissions is slight.

PS I HAVE done my research!

I love the number plate too but I took it further
Slow Bog (SLO 806). Bit worry then I’d say – wouldn’t want to be stuck behind it for long!