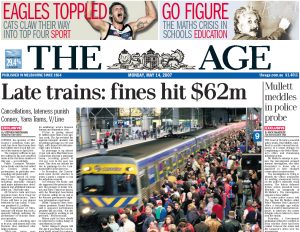 Yes, I had a heads-up about the story on the front page of yesterday’s Age.

Yes, I went to bed early(ish) and woke up early, ready as I could be for the onslaught.

No, it was not an audio problem on 3AW — I was half asleep at 6:25am when I spoke to them. “Government” is a particularly tricky word at that time of the morning.

Yes, I’d woken up by the time I spoke to the others just after 7.

No, I am not a morning person.

As for the story itself, it’s a little lesson in what the prominence of a headline can do. Apparently until Sunday night it hadn’t been planned to be a big thing, but someone decided it should have the front page. Sometimes it’s like real estate: location, location, location. It got the Minister out to talk to the pack about it, got the TV and radio and online media all chasing it, and kept going all day.

And it’s all part of keeping the pressure on the government to actually fix the problems. (Hey, we can hope, can’t we?)

8 replies on “I am not a morning person”

Sorry Daniel, but I loath the expression “heads up” which, I fear, is another Americanism creeping into the Aussie language (better words: prior warning?)

Roger, I am loath to point out that “loathe” is probably the spelling you wanted, but there it is. Just a heads-up.

Yeah, yesterday saw a guy at Footscray station taking pictures of people trying to get on the trains.

God, I hate myself now.

But, doesn’t the term “heads up” come from the traditional call made during that great Aussie traditional betting game – Two-up? There it is is both a call to get two heads but also for the people to look up and see the coins flying through the air.

OK, so I made up that etymology. But, surely, there must be something more Aussie than “prior warning” which sounds like something a future Australian would last hear at their court hearing just before being convicted and put on a boat bound for Botany Bay.

Ren, the media are getting much better at locating the train troublespots and getting good pictures of them. I dunno, somebody must be tipping them off on where and when to be there ;-)

Saw them at Glenhuntly last week, where it’s always crowded. If only they’d visit Ormond in peak too…

Did I read correctly in that article that $500 million is being spent on a ‘smartcard’ system for a system that handles approximately 175 million trips/year?

Half a billion for a payment system seems a trifle extreme….

Then again, Vancouver’s buses have Recaro seats for the drivers, two way radios, automated fare boxes and transfers and electro-luminescent route displays front, side and back, so I guess cost is no object for infrastructure.