I got a note from my electricity provider AGL, which, unbelievably after the number of times I’ve told them, got my name wrong again.

To add insult to injury, it appears that although I switched to green power just before moving in late 2005, when I moved they completely forgot about that, and I’ve been on regular dirty brown coal power since then.

Power retailers don’t individually transmit gas and electricity to you. It just comes out of one big network. What power retailers compete for, in essence, is the right to send you bills. AGL have screwed this up repeatedly, so I think they have lost that right.

I tried out the Origin Energy greenhouse gas calculator, which concluded that my household is generating about 9 tonnes of greenhouse gas every year from the car, electricity, gas hot water, heating and cooking. Of course it’s only an estimate, and it doesn’t count secondary emissions from the products consumed. 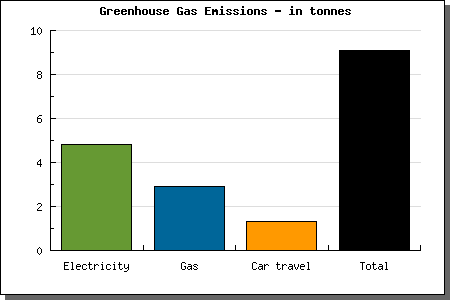 Annual emissions from my household

It also told me that to completely offset these emissions would cost $145.39. Well that’s one option, but carbon offsets have their problems: for one thing, there’s not enough space on the planet to provide the area for the trees to be planted if everybody offsets. And it’s only temporarily storing the carbon. Along comes a bushfire, and voomf, it’s out into the atmosphere again.

No, prevention is better than cure. What I actually want to do is switch to green generation of my power. Origin appear to have a bunch of good options, so I’ve signed up with them.

Oh. Oh. I just found an old blog post of mine proclaiming that I didn’t like Origin Energy. Oh well. I hate AGL more, now.

The other thing I want to investigate is solar hot water. That could work well. And the northfacing side of my roof faces the street, which could set a good example to my neighbours. Need to check on any local heritage overlay that might prevent putting panels on the roof, and find out if my Hardie C32 135 hot water heater is solar-compatible. (It’s 11 years old; I assume not ready for replacement just yet.)

3 replies on “Carbon emissions and billing”

Bugger the heritage overlay. Even if there is one, it should not apply to solar collectors. If it does, just challenge it in VCAT and you’ll win.

Buy three panels and a circulator kit from Rheem, and you should be able to plumb that into your existing tank It won’t be the same arrangement as it would with a purpose-built solar tank, because those have their solar panel input pipe about a third of the way up the tank, whereas you’ll just have to put it back in at the bottom I assume. But I have read that it will work.

I think solar collectors are about $750 each (they were three years ago when I bought them). And the controller/pump device was $240.

After recently replacing a hot water tank, I was told the average lifespan of a hot water system is only 8-10 years, so I wouldn’t be placing too much confidence in the longevity of yours…

I was thinking the same thing as Liz, a builder was in shock when he saw that our electric hot water tank was 15 years old and still working… ridiculous but true.