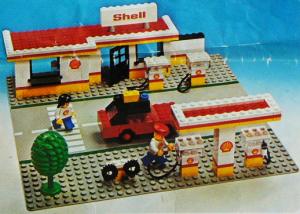 I’ve been doing so little driving that it had been a full month since I’d bought petrol. But that came to an end the other night, when the fuel gauge was finally getting very close to the big E.

So I pulled into the nearest service station, a Shell. Despite what they’ve been up to over the years, I still have a soft spot for Shell; they were the petrol stations in the old Lego Town sets when I was growing up, before Octan took over.

I started filling up. Then I noticed I wasn’t pumping Unleaded, but something called Shell Unleaded 95.

Unleaded 95? What was it? 5% ethanol or something? No, that should have been cheaper, and this was actually 6 cents higher. Obviously it was still called Unleaded, so it couldn’t be too different, but what was I pumping into my car?

I pondered what to do. There was no normal Unleaded at this particular pump. And there was another car right behind me, so I couldn’t go back. I decided to try and play it safe and stop at $20 of fuel, then see how the engine reacted.

It seemed to drive okay, which was a relief. When I got home I Googled it. Turns out Unleaded 95 is also known as Shell Premium Unleaded, and is a high-octane version of conventional ULP, allegedly giving better performance.

Like I care. From reading the propaganda about it, I somehow doubt my old “bathtub on wheels” is getting any benefit out of it.

But hey, at least it didn’t screw-up my engine.

7 replies on “What is this stuff?”

I use 95 octane unleaded all the time. Our Renault requires it. My Corolla benefits from it and shows the results in better fuel economy. See if you get more mileage out of this tank than the last one.

Yep, unless you have a high performance car and the manufacturer requires you to use higher octane fuel to preserve the warranty (like they could ever trace it) then you are wasting your money. Higher octane fuel will be lost on most regular cars. Interestingly ethanol has a higher octane rating (pity it has less energy).

all I wanted for christmas when I was 10 was a lego octan petrol station.

I never got it and I’m still sore about it.

Before I had a company car (and thus cared about my fuel costs) I was using Premium… I would literally get an extra 50-100km out of each tank with it and she ran that little bit smoother. I never went for the super premium stuff though…

heh, Philip, I’m going through about 1 tank/50 litres a month. Fuel economy really isn’t something I’m that concerned about, nor do I have the energy to track it. I primarily save fuel by not driving :-)

Glenn-
They can trace it through the knock sensor & computer.

I have a turbo hatchback that needs premium, and using regular means getting 200km less from a tank while only having 2/3 the power.

I can live with $4/extra per tank, for the gains!

My understanding of higher octane ratings is that it is a measure of how little the fuel “knocks”, is randomly detonates rather than just burns (smoothly). This gets worse at higher compressions, so a higher octane feul can safely be ignited earlier – effectively at a higher compresion which results in higher efficency.
All unleaded vehicle have knock sensors and automaticlly advance ignition until there is no knocking, so you would think they would all benefit from higher octane fuel. But in many cases they don’t and I know in of some cases where the engines need to be manually tuned to take advantage. And many new cars, even Japanese ones, need 95 or better.

P.S. It’s nice to be able to be a geek (“nerd” in my days) on a subject not invloving computers at all.