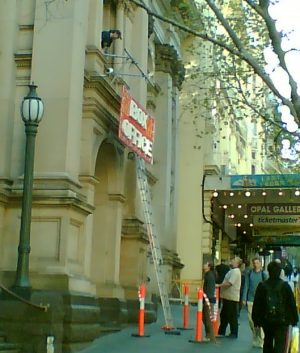 No more laughing. The Comedy Festival has come to an end. Yesterday they were taking down the big Box Office sign with the Leunig characters on it off the side of the Town Hall.

Just before it finished on Sunday, a bunch of us braved the Waiters (seemed to have bounced back from previous bad form) and went and saw Gerard McCulloch at the Victoria Hotel. (My goodness, he has a Myspace site.)

A smallish audience of perhaps 20, we laughed our way through an hour of very funny material. I’ve seen one of his other shows, and while that was amusing, this was really funny. The stuff poking fun at caberet was hilarious (as was his reaction when an audience member noted he might be turning into a caberet artist himself), and the idea of responding to anything you don’t understand and/or don’t like with an almighty kick “Bam!!” could well become a catchphrase around home.

Bugger, missed out this year with too many other commitments.

Something’s been bugging me about this entry for days. It’s just occurred to me now what the problem is. It’s Gerard, not Gerald.