It’s ANZAC Day, and time to pause and reflect on the sacrifices made by our forebears.

Hardly the time to be thinking about money. But due to a set of circumstances last week that saw my bank balance drained to close to zero — something that hasn’t happened in quite some time — I have been thinking about money. There are times, when I look at my household finances, that I ponder the wisdom of having taken on a mortgage. Then I read the reports about how the house prices in my suburb (and in all the areas nearby) are going through the stratosphere, and feel a little better about it.

“Bentleigh and East Bentleigh continued on their extraordinary way with strong competition fuelled by buyers forced out of more expensive inner and bayside areas.” — Age 19 Feb 2007

And when I listen to the sound of my wondrous dishwasher doing its work for me, and I feel a lot better about it. I love my dishwasher. And my house.

But it’s undeniably true that the mortgage has made an impact on the money flows. Recently I looked through my spending for the first three months of this year, and as you can see from the graph below, the house certainly does dominate. 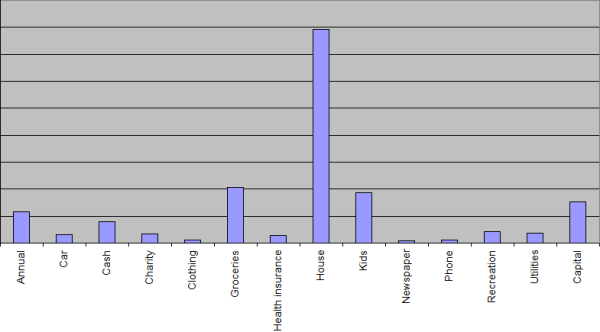 (Trust me, you don’t want to know how many actual dollars that big blue tower represents.)

Ouch, yes, it certainly dominates. But there is the capital investment in a tangible thing as well. So, that has to count for something. But yes, it is scary when the bank balance is low, and the money is seeping out fast, I’ll agree.

One thing that helped me take control of my finances was to establish a baseline budget for fixed items (such as the mortgage), and then to pay myself a $100 per week stipend (adjust to suit your lifestyle) but not paid as cash – try to use the EFTPOS as much as possible. The rest of the “excess” cash (and trust me, at one stage, I was in the same boat you’ve just described) turns into savings for a rainy day.

If your baseline fixed expenses + your stipend > income, you need to take less stipend, and if that’s too little money to “live” on, then it’s time to think about reducing the fixed expenses, such as the mortgage. I had to do this, and it wasn’t pleasant. But I took it as an opportunity – not a disaster – and did something I always wanted to do – move to the USA and try living here for a while. So it’s not like I’m living as a pauper now, and it doesn’t feel like I’ve cut back on my life at the expense of everything else. This allowed me to take control of my finances, pay out my debt, and do something positive which I will remember for all my days. If it pays off, we should be able to return to Australia well enough off to buy a place in a suburb I’ve wanted to try for a while – the Moonee Ponds / Ascot Vale area.

But something that allowed me to stay in my house a lot longer than otherwise was to take a very hard look at my optional expenses. I cut back on:

a) newspapers and magazines. I subscribe to 1 car mag and New Scientist and read the rest on the web. This saves over $300 per year. At least. I had a v. v. bad magazine habit.

b) optional extras, like cable tv. I had a hard look at my viewing habits and reduced the package to what I was actually using. Saved me $30 per month.

c) Work related eating expenses. Morning tea, lunch and afternoon teas used to set me back $20 per day when I worked at the NAB… and made me fat(ter). This is $400-450 per month. I now spend less than $50 per month on these expenses by taking in good quality coffee, biscuits, fruit and home made lunches. My current work also pays for lunch three times a week, which is just awesome.

d) Entertainment. I love music and movies. I now buy these from my $100 per week stipend. That means I generally buy 1 iTunes album per month, and we go out to a movie like once or twice a month. This saves a lot of cash when you don’t just splurge. But the days of collecting 700 CDs and over 200 DVDs are gone.

e) Eliminating debt. I used to have $25k in credit cards in 2002. Although I was making good headway on getting this down, it was costing me a fortune every month in interest alone. I sold the house and paid out the last credit cards. I no longer have any credit cards. We’re working to have a $5k emergency fund for … emergencies or just gotta have it trip back to Australia. This way, we can manage debt properly, rather than us being a slave to the credit card. If we absolutely need one, we can get one, but so far, not necessary.

f) Shopping more carefully. I’ve been able to learn how to do this over here. In Australia, at Point Cook, shopping was always brand name this and that. Often a single dinner party would cost me $150 without much in the way of booze. Without spending too much time, I’ve worked out how to game the system here. It’s just a matter of buying up big when it’s cheap (even if brand name), and not doing so when its not. Last night I saved at least $16 in discounts on a $100 five day shop for me and Tanya (our supermarket prints it on the receipt). I also changed to a different brand of OJ for this week as they were selling this brand for $1.49 instead of $4.39. Over time, this type of saving adds up.

g) Looking at the mobile provider. I used my Australian phone a lot more than my friends on Telstra did. But my bill was $50 per month because I chose a plan that suited me. If you’ve been a long term customer, ask them to find you a cheap plan which suits your calling requirements.

h) ditch fixed phone lines, especially if you have a mobile for those emergency calls. We now use Vonage (a major VOIP provider here). It costs us $24 per month on top of our $33 per month Internet cable bill. Calls back to Australia should be free, but are not. However, they’re just $0.02 per minute. So our last few bills have been less than $30 per month.

But you’re doing the first thing – you have to work out what you’ve spent your money on. Which is why I don’t take the stipend money as cash. Download your statements electronically into Microsoft Money or Quicken, and you can pin point the waste. If it’s cash, you’ll zoom through it in no time and end up taking more out. However, keep a tally on your stipend so you don’t overspend.

Definitely try the budgeting method I described – it works for me, my brother and his wife (who taught it to me). But if it doesn’t let you get into positive territory soon, don’t think of the alternatives (such as moving) as a failure, look into doing what you’ve always wanted to do and do that instead.

People like you Andrew make me want to smack you, laugh at you and ask you to come and fix my finances because your so brilliant at it oh wise one lol