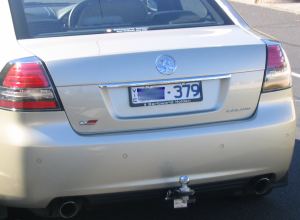 What’s the deal with those little car licence plates? Particularly on big cars which have plenty of space for normal licence plates. I seem to see them a lot on SS Commodores and 4WDs.

Surely the point of licence plates is to make cars easily identifiable, in which case allowing smaller plates where they’re not needed makes no sense. I can understand why cars with a smaller spot for the plates might need them (judging from the VicRoads web site they came about because of this being the case with some European models) but why on bigger cars?

Is a small plate on a big car a sign that the driver wants more stylish, minimalist plates, or thinks they stand less of a chance of their number being noted/photographed if they drive like an idiot? Hopefully camera and character recognition technology is such that it doesn’t really matter.

The reason I wanted slimline number plates was that they do not contain Steve Bracks’s idiotic slogan. They simply say ‘VIC’. But I decided I liked the combination of letters and numbers better on the next available full size plates, so I bought those instead and am putting up with the constant reminder of what the Premier thought was the most important thing to do first in the job.

From what I understand, the size of the letters/numbers is standard, it is the surrounding white space that is reduced on the smaller plates. Knowing VicRoads they probably charge extra for the smaller plates, so you are paying for something you aren’t getting.

no doubt a call for ‘banning’ is iminent…

Reminds me of when the ACT govt decided on the slogan “Feel the power of Canberra” for plates. This didn’t go down very well, Canberrans didn’t want to drive outside their borders with that slogan. Took the government long enough to make the slogan optional and 2 years to change it.

Many cars from Europe need plates which are the same height as European plates. If they had a normal sized plate, it’d be hanging off the car, or worse, damaging the paintwork. Look at any Alfa front bumper the the next time you see one – you’ll see this in action. My old C3’s plate area was too small to take an old style plate, so the option of a smaller height plate is very useful.

Admittedly, some of the plates, particularly the fake Euro ones (basically Victorian plates in the typical European format such as V (state logo) XN-4332 ) are more to please the owner than anything else.

My old plates are nice blue ones with my cat’s name. My current (MD, USA) plate is boring … but interestingly the same size as the old style Victorian plates. Must mean that back in the day, plate sizes were chosen to be US sized rather than Euro sized. This is not surprising as the major local car manufacturers at that time are all US based (Ford, GM, Chrysler). CKD (complete knockdown kit) car assemblers (essentially all the UK brands you don’t see any more like Austin, BMC, Rover, etc and VW) could take any old size.

The facts are quite different – the responsability tends to be split about 50/50 – looks like stupid people walk and drive cars.

And REALLY STUPID PEOPLE drive huge 4WD’s with bullbars that never leave suburban areas – these have dramatically increased the road toll (killing more pedestrians and killing more people in other cars) this is a simple fact.

If the fashion was to wear clothes that killed other people I’m pretty sure that would be banned – now the fashion is 4WD’s and everyone seems to think that’s OK? Strange world we live in….

marquis probably was referring too ppl that take everything to heart & think that everything should be acted upon because it’s unsightly or not understood. I live in a location that newly arrived inhabitants think it’s compulsory to have a dumbar$e 4WD as soon as they pick up their keys to their new home. They probably only take it to Finke Desert race *snigger* and that’s it rest of the time they are trying to kill my kids at the school crossing, wheezing from the lights puffing big black clouds of smoke and generally blocking anyone that has a regular car. (You NEED a car in the NT trust me I was foot falcon for years in 43c heat it aint pretty especailly with a small child in tow). Sometimes people get over zealous about other people sure there’s wankers a plenty but really they are the entertainment of life (as long as they aren’t trying to kill everyone). No? I drive something that would be ridiculed here but I can tell you I’ve always liked those kind of cars since I was a girl, I’ve tried to rid myself of this evil I assure you. I don’t link being lumped in the same catergory as those wankers. I’m having my Concord moment my next car will probably be to everyones liking because there won’t be any large cars to buy & hopefully no big 4wds too lol. When you travel regularly to the capital cities by car, with kids & luggage a big, comfy car for such long trips are most suitable. Anyway I’ll shut up now lol.

p.s. what I meant about blocking a regular car is that there are so many that backing out of a car park in Coles can be tricky with one on each side of you. Plus, even here in the outback they aren’t really needed unless you live out bush.