Good numbers, considering it had poured with rain a couple of hours earlier.

Human sign, as seen from ABC helicopter. Channel 7 also sent a chopper. We were on the A in “Climate”, where the cross-bar thingy meets the right hand side. Shot after the sign. They reckon about 2500 people turned up in all, which is not bad given it was organised by a local group. 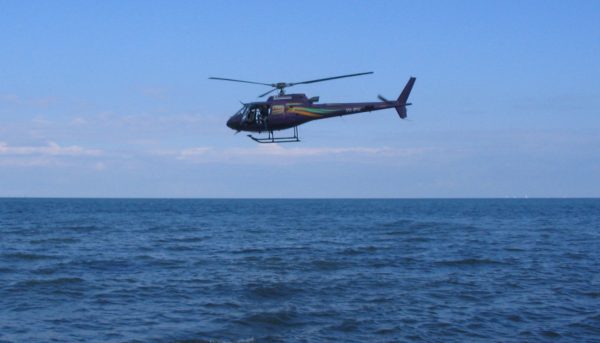 The ABC helicopter passes-by low over the water.

10 replies on “Pics from yesterday”

My family made up parts of the N, G and W (depending on which school or group of friends we were with).
The only annoying things were that it was advertised as at Sandy Life Saving Club when it was almost 1km back towards Hampton (so after tying our bikes up near Sandy library we had to walk half way back) and it was at 11am not 10am as advertised.
Otherwise, a good morning!

Wow, that’s a great sign! Well done, and /wave from the tail end of Earth Day 2007 here in Canada.

I do wish politicians would listen to us. Dr. David Suzuki, a noted environmentalist, has said we must ACT NOW, and not later. *sigh*

while you all may feel much better, it was a pointless act.

humans are not contribuitng to climate change.

if climate change is ocurring at all, its a natural event which is caused by factors beyond our control.

What evidence would you like to present? Or are you siding with the only major scientific organisation to disagree, the American Association of Petroleum Geologists ?

I agree with the marquis on one point … it was a pointless act. The government is going to do exactly what about it? I’d tell you, but it’s rude. *sigh*

i notice little johnny is saying that climate change isnt an issue, i think someone needs new advisors..

Im counting the hours until someone in the opposition notices that his speach last night labled “Australia Rising” (http://www.pm.gov.au/media/Speech/2007/Speech24272.cfm) can be soo easily derided as “Oceans Rising”

any other ideas for them…
maybe:

If howards policies go ahead, Australia WILL have to Rise

I’m just struck the the sign only being visible to people in helicopters. Doesn’t that negate the point of the event? I mean, do it somewhere that’s visible to people in aeroplanes as they take off or land, sure, but driving to some random beach so that speople can fly helicopters over you… a bit like drawing attention to animal cruelty by having a live kitten barbeque…

Like most of these types of things, it was a media event. You’re trying to get a message to those in charge that your cause has popular support, by getting it on the telly and showing that X thousand came out to voice their opinion.

I have been part of many media events, and one thing I have tried to do is not opposed the cause via the media event. It rarely makes the even much more difficult but it greatly reduces the chances of backlash.

If you’re trying to get the media to show thousands supporting you, wouldn’t it help to actually have the thousands on hand? A couple of hundred people on a beach is a good start, but it’s not thousands of supporters.

Doesn’t Melbun have any tall buildings or cliffs overlooking beaches?

there are many respected bodies which disagree.

sadly, the whole debate is taking on a religious overtone – those who dare to question junk scince are pilloried.