So, did we all get the fake SMS from Connex last night? I certainly did. Looks like lots did.

ALLAHU AKBR FROM CONNEX! our inspectorS Love Killing people – If you see one coming, run. Want to bomb a train? they will gladly help! See you in hell!

A hoax message was sent tonight to some users. Connex apologises and is investigating with the police.

Doesn’t instil you with confidence about their security. We’ve had people vandalise their trains before, now they’re vandalising their computer systems.

By the way, a bloke in Big W last night asked “Don’t you work for Connex?” No mate, I don’t. But with Channel 7 running an advert which includes the shot below (at Flinders Street Station) for the past week, I can almost understand the confusion. 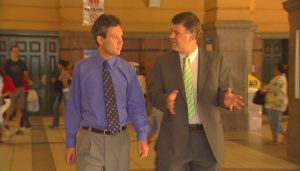 Hey, at least they finally used one of those damn walking shots!

PS. 2pm Ooh, funny. My new couch arrived this morning. Shortly after that I was asked to re-create receiving of the SMS, for a TV crew. As a result, you may see my new couch on tonight’s ABC TV news.

It’s a shame the hackers didn’t write something like ‘Connex would like to apologise for its unreliable service and wishes it to be known it is doing all it can to reduce the number of canceled and grossly overcrowded trains.’

That wait it would have been clear to all recipients that it was a hoax.

Suffered on last week’s first train to uni ever – by Prahran Station our carriage was packed. Angry Connex man boarded and yelled at us to move up the centre, to which a sassy woman asked him exactly how he would like us to move, since every pointy part of one’s neighbour seemed to be stuck into one’s every nook and cranny. Not looking forward to the next three years of THAT kind of commuting.

Quick question, I thought you might give us a little insight on the madness of Connex’s method – on the Sandringham line, why are Hampton and Sandringham the only two Zone 2 fare stations? It’s annoying (especially being a broke student with only a part time job to supplement transport, board and food costs) having to pay an extra dollar eighty every day to travel the 30 seconds between Hampton and Brighton Beach Stations. I guess the only solution there is to borrow a bike and ride the extra 2km… and don’t get me started on the reason given to me by Connex when I asked why we couldn’t get tertiary concession yearlies… “Because you have time to get a job!”

Eugh. Guess I just had to vent. Bloody Connex!

Rihana, with regards to overcrowding, I’d encourage you to write to your local MP and Connex, and consider joining the PTUA.

The zone system has evolved from previous systems. this map from 1983 shows how we ended up with what we do now (including the poor people in Clayton being the only station on the Dandenong line that is exclusively in zone 2).

There’s nothing wrong with the principle of people paying a little more for travelling longer distances. Problem is it’s not a little more, it’s a lot more, and it especially stings for people in places like Hampton, just across the border. In a way the small number of zones makes this worse, and it’s not helped by the fact that Melbourne’s PT fares are higher than other Australian cities’.

Rihana
there will always be a problem with boundaries. It will always be unfair for those living “just outside”. 3 (or 2) zones is simple, at least.
Believe it or not, I have bought 2 houses (to live in) in my life and based BOTH location decisions on train zones since I work in the city.
1) Bought in Box Hill in 1983. But the Met changed Box Hill from Zone 1 to Zone 2 shortly after I bought the house. D’oh!
2) Moved to Hampton (off South Rd) close to Brighton Beach station in 1993. Pls God they don’t change B.B. station to Zone 2!
Realise not eveyone has a choice where they can afford to live!!!

Living in Adelaide hadnt realised how cheap public transport is – not going to discuss convenience factors or even availability out of normal hours – but experienced some public transport recently in Sydney and Melbourne. Could not beleive the prices paid to travel in Melbourne, the inconvenience of trams stopping due to protests, U2 concert, farmers protesting and then we did not see any other passengers attempt to validate or purchase tickets – all three of us dumb South Aussies paid for all the public transport we used. In the end we resorted to using taxis to get around – it worked out way cheaper and due to ill health was more reliable than standing out in heat waiting for transport that was cancelled without notice. Loved all the publci transport available in sydney prices are a bit more but a lot more reliable than Adelaide (way more reliable than Melbourne).

Didn’t see your new couch on TV but ABC radio were playing an interview with you on the hourly news before I headed out just after 11am on Saturday morning……. I spent ALOT of time (8 months) finding a decent rental property within walking distance of a zone 2 station. Will all that hard work be undone with a big price rise once they abolish zone 3??? I’m not sure how that’s going to work.

Is that a touch of grey in your hair in that shot??? Guess it’s been a while since I’ve seen a recent pic of you. It looks good on you. But still, grey hair???

Not totally grey Greg, but getting that way!

Isn’t everone forgeting that the zones overlap by 3 or so stations and therefore there isn’t a hard boundary.

Sven, the zone overlap has its advantages, but there’s still a big price differential if your trip is just over a boundary. You still end up paying 60% more because you’re going to the city from Hampton instead of Brighton Beach, for example.

Agreed but whats the alternative? Bring back short trip tickets?

One idea was to slightly increase the number of zones, to 4, with the 4th being basically the City Saver zone. Then you bring the price of each zone down to be consistent, so the graduation across zone boundaries is much less (eg: one zone 2 hours $2, each extra zone $1). The result would have been costs about the same for zone 1 to CBD trips as now; a drop for people not going all the way into the CBD; drops for people from zone 2/3, with less of a hit for the extra zones (which currently encourages people to drive to zone boundary stations).

Of course that’s all out the window now with zone 3 being abolished in about a week. There’s still tweaking they can do instead of course, to make it work better.

The other alternative sometimes pondered is distance-based fares. But it’s a nightmare, and incredibly difficult to understand, as anybody who’s tried to work out a multi-sector trip via V/Line will know. The zone system, for all its faults, is at least very simple to understand.