The Australian government is going to get conventional (incandescent) light globes phased out in favour of energy efficient bulbs.

Obviously this will save people money on their power bills. And it’ll reduce household emissions. Up to 75% of emissions from household lighting will be saved.

How much is that? Ummm… Well, not that much at all, actually. Because lighting only accounts for 3% of household emissions. 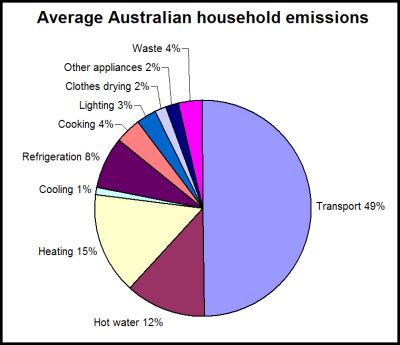 So how are they addressing the big hitter in the emissions game, transport? Ummm… by putting $19 billion into roads.

Interestingly, I heard on the BBC World Service overnight, people in Berlin being asked whether they thought the Australian government’s proposal to phase out incandescent globes was a good idea. (News travels fast!) All were very positive. One woman said it should stop John Howard’s plans to go nuclear!

Ah, its all in the name of “positive spin” right? If somebody in opposition rightly asks “what is this government doing to help stop Greenhouse gases” they can say “oh we’ve instituted a replacement program for incandescent bulbs”, and of course, not mention how small a percantage of power that will save. *rolls eyes* It’s like here in Canada, where the majority of the power is used on the hot, humid days we do get in the summer. If people who run their air conditioning would instead do their homework, and install ceiling fans we’d have a lot less power drain! It’s not the winter’s freezing cold that draws on the power reserves, it’s the need to be cool, temperature wise.

Yes, more money on Public Transport and keeping cars off the roads is wise investment.

aircon is the most unnecesary energy waster. especially in places like melbourne.

why run it all except on days over 35 degrees.

Trouble is I have a few old-fashioned sort of light fittings the new-fangled bulbs won’t screw into! (Perhaps, if I’m lucky, the globes’ll get redesigned with a narrower waist in the next few years.)

Air-conditioning and heating are eating up the kilowatts – maybe someone should design some clever windowglass coverings or wallpaper that insulates.

Cars will get more energy-efficient, but we do need policies and services that will make leaving the car at home and shuttling around on PT attractive and convenient.

That’s my 6 cents worth.

15% for heating and just 1% for cooling for whole Australia?! HowÃ‚Â´s that? I would have expected different numbers in a rather hot country like that…

Hi Daniel. I disagree with the pie chart, which suggests only 3% of Australia’s greenhouse gases are caused by lighting. The other source you posted, but didn’t show (probably to further your cause for more money being spent on transportation, since it showed a lesser amount generated by transport), suggested 5% of our greenhouse gases are from lighting. I recently heard a discussion on the radio, which included input from relevant scientists, suggested the figure was closer to 11 to 18%.

From personal experience, I can tell you that at the beginning of the previous billing quarter, I replaced a dozen incandescent bulbs in my home which we’re used most often with compact flourescent bulbs. And 3 months later, after examining my last electricity bill discovered I had reduced my household emissions by more than 20% for the same quarter last year, not to mention, reduced the size of my bill, helping to pay for the cost of the bulbs.

Replacing incandescent light bulbs with compact fluoros is such a simple act that everyone can do to try to help reduce our impact. And even if it is only 3% of our emissions being produced by lighting, no-one should trivialise this. It’s becoming more and more apparent that we, as a global community, need to drastically reduce our emissions. Hopefully making everyone replace their incandescents with CFL’s will have a flow-on effect of getting more people thinking about the emissions their actions produce, and maybe will take further actions to reduce their impact, maybe by getting their power from electricty plans that includw renewable resources, or by driving less, or by choosing to buy local products rather than international, and so on.

Also, you may have read the recent article in The Age, which suggests CFL’s cost $8 each, I can tell that I got my bulbs for less than $10 for a pack of 2 bulbs from Bunnings. I really don’t think anyone can argue the cost of the bulbs is too great. The bulbs will easily pay for themselves many times over at that price, as they last so much longer than incandescents.

Be smart, and do your part. Change to CFL’s and keep an eye on your utility bill to see how much greenhouse gases you saved.

Every little bit helps, I guess.

Though it really will be a case of too little too late.

Joel, these figures are for household emissions only, not the whole nation (eg industry, government, etc). Yeah I have been steadily replacing my lightglobes with energy savers as well.

And as regards the cost, you’re right; $8 each would be about the maximum people are paying. And in fact as demand goes up, the price should come down. (And Michael, the designs will improve too, I’d expect.)

The most important to remember with these “energy efficient” bulbs is that they CANNOT be used in all enclosed fixtures. The heat build-up inside of those fixtures will ruin the bulb. We didn’t know this until we went to replace some fixtures that used silly little candlebra bulbs (terrible efficiency!). The lighting salesman said we’d be wiser to pick a low profile ceiling fixture that has an air gap all around the top edge. About a 2 inch gap. Hope that’s clear enough. Yes, we’re all energy efficient bulbs here except for one small desk lamp that I turn on for doing bills etc.

Personally, I hate them – they take a few minutes to come up to full brilliance, and I find that really annoying.

I agree with encouraging people to use them, but not to the point of outlawing incandescents.