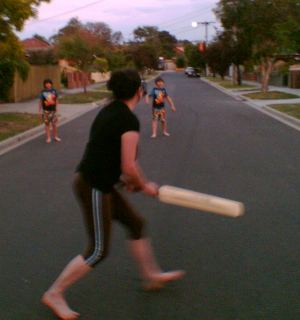 Summer rolls on, with several hot days this week leaving us sweating.

On Thursday night we had an evening session of street cricket, always good when it’s warm and the sun goes down late. It’s not exactly The Ashes, and some fielding slip-ups meant one tennis ball went down a drain. Oh well. If we’d been bothering to count runs, that would have been six and out.

We eventually called it stumps when it was too dark to see properly.

Last week I took the opportunity to take the kids to the pool a couple of times. In the nearby industrial end of Moorabbin is a centre with a wave pool.

It looks at first glance like a beach. A kind of hard, digital beach, with no litter in the sand (indeed, no sand), no jellyfish or shells, lifeguards everywhere, and the cleanest water you’ve ever seen. And it’s heated quite warmly, so unlike the other pools, so there’s a cold shock to the system when you go in.

I found my bathers ballooned up when I entered the water, somehow filling with air pockets. The only way I could get rid of them was to give them a slight tug to let the air escape, which had the unfortunate effect of releasing big bubbles of air to the surface, as if I’d done a massive fart underwater.

Evidently the sequence of events in the wave pool is random: the sessions of waves come at unpredictable times (heralded by an alarm, and almost unintelligible loudspeaker warnings about keeping away from the walls, lest you get washed into them and do yourself an injury). The waves are interspersed with automated rainshowers (very tropical) and bubbles from various locations. As each occurs, some of the pool (mostly the youngsters) would rush over to get prime position to enjoy them. Rather amusing to see the odd middle-aged man waddle over to try and get a spot amongst the bubbles though.

Eventually the chlorine started to take its toll, giving both Isaac and myself headaches. On the second visit we limited our pool time to a couple of hours, which seemed to get around that problem. Good fun though, and a great relief on hot days.

You forgot to mention that kids under 10 years must be accompanied by an adult in the wave pool when the hooter sounds. We went to Waves this arvo and I had to endure the surf with my 9 year old. I’d rather be off swimming laps in the 50m pool or sitting down guzzling a latte from the kiosk.
PS On a hot day, why don’t you go to the outdoor pool in East Boundary Road?

We switched between the Wave pool and the other one during the time we were there. Quite a temperature contrast!

Will try the East Boundary Road pool at some stage. It’s been decades since I’ve been there. But I suspect Waves is more fun. (Judging from today’s press they’re going to need to fix up both the Glen Eira pools soon.)