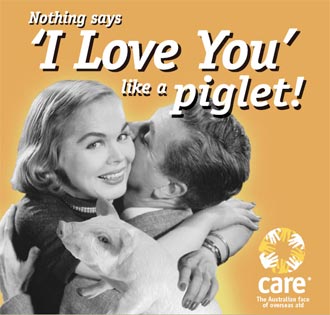 Sometimes I despair of the human race.

Yesterday morning I was lazing in bed when I noted an advertising supplement that came with the newspaper, called something like Christmas Essentials — 64 pages of totally stupid gift ideas.

Admittedly some of the featured items were okay, but it also included some of the most useless, yet expensive things known to man.

And don’t get me started on the televisions costing five figures. It’s almost obscene the amounts of money some people apparently spend on things.

The antithesis of this was another insert in the paper — a catalogue of things you can buy to help the underprivileged of the world. People who may not have ever seen a TV, let alone a nineteen thousand dollar one.

So instead of buying someone a crap Christmas present that they’ll hate and chuck away unused in January, the money can go towards something of real value to people.

If anybody out there is thinking of buying me something this Christmas, and they don’t know what to buy, I’d lean towards the latter booklet. Please, buy a village a pig or a bucket or a hygenic toilet on my behalf.

7 replies on “Gifts for those who need them”

A friend bought me a goat last christmas. It’s so true about buying gifts that just get chucked away. At least my goat (hopefully) made some poor family happy.

Neil has beat me to it and included the link to TEAR’s “Really Useful Gift Catalogue” that I was going to suggest. This is, of course, a great alternative to useless gifts, but you have to pick the right recipients to avoid offending a relative or friend who doesn’t see just how great this alternative is! (And who relies on the annual socks ‘n jocks or 2 for $30 t-shirt gift!)

Unwanted Christmas Presents: Getting the Most out of Christmas by a the pinko left-wing researchers at The Australia Institute.

Basically, most people would prefer a gift to a charity.

Interestingly enough, this very topic of sending goats etc to poor African countries has sparked a huge debate here in Europe, with claims that it may in fact do more harm than good.

I agree with you about rampant consumerism, though and I give my dosh to Greenpeace, the Salvos and Red Cross at Christmas. Hopefully it does someone somewhere some good.

… Do people really spend $4000+ on a barbecue? … And donÃ¢â‚¬â„¢t get me started on the televisions costing five figures. … help the underprivileged of the world …

I was browsing the forum on an online auction website and found an interesting post. The poster was saying she would be happy to buy from someone if they then giftwrap it and put it under a givng tree.