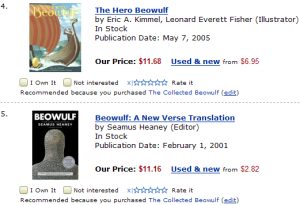 One of the better sides of globalisation is the huge range of literature of all types is available anywhere in the western world. Amazon and their ilk have meant I can (for example) order that obscure Beowulf graphic novel my sister craves for her birthday — even if the result is that Amazon now believes I’m fascinated in all things Beowulf, even though I’m not — doesn’t help that they lost a lot of their older sales data.

Offline, many publications from around the world are available at real shops, if you know where to look. So you can flick through the pages and buy it instantly and read it on the way home.

Back in the day when I was a junior geek, I was able to buy specialist magazines like Zzap! 64 or The Micro User if I traipsed down to the newsagent in Acland Street, St Kilda, which had a better range than my local one. And I could go play Galaga and Donkey Kong at Luna Park, of course.

Or I could go into the CBD. The Technical Bookshop was always a favourite of mine. They used to have a terrific stock of books and magazines from all over the planet, and in a great location in Swanston Street. Alas they’ve plummetted downhill in the last few years, moving to an obscure part of the CBD, and thus losing many of their customers. As the customers have vanished, so has the range, and when I dropped in there yesterday chasing a mag, they had no more than the average newsagency. (In fact probably less than the local one near my house.)

Whereas McGills hasn’t moved in decades, and have apparently been around for over 140 years, and the range is still okay. But I’m told they’ve been taking unfair advantage of the new easy dismissal laws and generally treating their employees like crap, so I’ve gone off them a bit. (Maybe they got nasty after being sold?)

Happily I discovered (through checking the web site of the distributor of the mag I was trying to track down) a new specialist shop called Mag Nation, in Elizabeth Street near Collins Street. They not only seem to have an amazing range, I found they also do the New Retail thing of serving drinks and refreshments, and when I went in, I found their staff very helpful — even though they couldn’t furnish me with the particular thing I wanted.

They have longer hours, and are even closer to work than McGills. Cool.

Glad you liked mag nation. Not only is our range wider than anyone else (we have over 3000 titles), but we also are happy for people to browse to their heart’s content. Thats why we provide all that seating and even have return boxes so you don’t have to feel guilty browsing.

If we happen to be out of a particular title that we normally get in, we are happy to put you on our request database and give you a call as soon as it comes in.

Cool, thanks, will keep it in mind.