The great thing about election day is you can exercise your right to democracy, and have a sausage too. 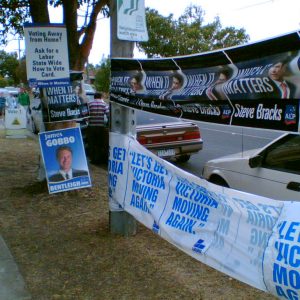 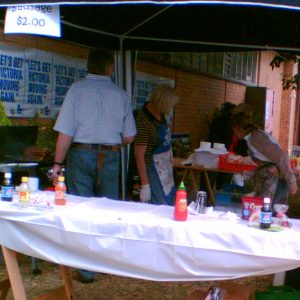 PS. Sunday night. Result probably what most people expected. Interesting to see that the ALP misinformation worked — some people were asking Greens helpers if they were preferencing Libs. (They weren’t — they preferenced ALP in all but a few seats, and didn’t preference the Libs in any seats. And let’s not forget how ALP preferences got Australia its first Family First senator in 2004…). At time of writing it’s looking doubtful the Greens will hold the balance of power in the upper house, which would have made things interesting. I spent election night at my sister’s place, enjoying good food, drink and company, and many phone calls about results coming in.

Someone came back for a total of three (sausages) in North Fitzroy!

I worked at the election as an official, it wasn’t half bad. Was disappointed at the lack of sausages tho!!

Should I feel like a stalker cos I was driving down Tucker Rd on Saturday and saw you waiting at the lights eating your sausage? (and by the looks of things, really enjoying it too!)

Sausages? Must be a Vic thing.