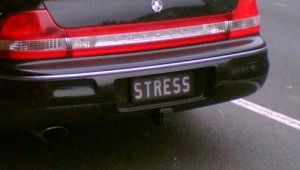 Last week I filled up my car for just over $1 per litre. It was $1.069, and I had some freaky discount offer that gave me 6 cents off, instead of the usual 4.

But just seeing the humungous tank-like 4WDs rolling around the streets, and the resistance from government to improve PT makes me think we’d actually be better off if the price of petrol shot up. Oh, not personally, I know, but collectively.

If petrol doubled or tripled, there’d finally be some action on reducing our use of it. Less smog as people moved to hybrid/economical cars. Less traffic as people walked, cycled or used PT (which the government would be finally forced to upgrade and make competitive with driving) more.

$3 per litre? I can see the benefits.

I agree. Three times the price would do it, although the 150% increase from $1 to $1.50 a litre in the last two years has had a good (ie tempering) effect on the sales of uselessly large vehicles.

A tax (pox) on 4 wheel drives would be a start. Maybe an annual fee of some sorts which is then applied directly towards forest conservation. I heard that the Mayor of London is talking of introducing a toll for 4 wheel drives to be driven in London. Doesn’t sound like a bad idea to me.

It would be good if the government cut the fuel excise to give us some releif! :x

Simon: Uhh, no. What I’m saying is the relief should come in weaning us off petrol, not making it slightly cheaper. (Cutting fuel excise would cost billions and only bring the price down slightly.)

As an ex-pat Brit, I used to grumble about the price of fuel in the UK — it was the equivalent of $2.30 per litre when I left the UK last year.

How much did this whopping fuel tax reduce congestion? Not a jot, people will always grudgingly pay for fuel whatever the price.

And yeah, people will always drive if they have no alternative.

Just a thought on what you said Daniel, you say you see “tank like” 4wd’s driving about and that it would be good for a rise in petrol price. I assume you mean a rise in fuel price would mean an owner of a large 4wd (eg a Nissan Patrol or Toyota Landcruiser) would pay horrendous amounts more than usual (and more than the owner of a car that uses less fuel). If that IS what meant then I’m afraid its not entirely correct.

From a quick search of the web I found figures for several Holden engines here http://www.caradvice.com.au/593/holden-ve-fuel-usage-consumption-figures/

Against this from a recnt trip my parents took in our 4.2Litre diesel engined Nissan Patrol from Sydney to Brisbane along the coast and then down (inland) to Melbourne (they caught the last ferry from Hobart to Sydney to start the trip). On this trip of about 5000 kilometres they averaged only 11.49 L/100 Km. A figure similar to our fuel consumption around Tasmania. Incidentally the last time anyone paid $1 for a litre of fuel in Tasmania was a long time ago. the fuel here averages $1.109 and up.

Don’t take this as an arguement against public trnasport or newer vehicle technology, both of which I support (apart from living too far away from any form of public transport).

Yeah Dave, I’m not specifically aiming at 4WDs, but inefficient cars in general. You’re right, some sedans burn up a helluva lot of fuel. In many cases big cars simply aren’t efficient for suburban driving.

Just be sure, as you move personal transport off the road and people into Public Transport, that the accessibility aspect is properly dealt with. At the moment, despite tremendous advances over the nearly 26 years since the IYDP, Public Transport and accessibility do *not* go “hand-in-glove”! And the danger is that while the politicians pat themselves on the back for those aforementioned advances, nothing newer, better and *necessary* will get done.

1st point: in response to the increase in fuel cost causing an increase in prices elsewhere: this is correct and would (hopefully) also aid in convincing the government and people in general to promote fuel efficient means of transport (upgrade the rail network for example)… Of course, what would probably happen is the prices of everything go up, and there is no distinction between fuel-efficient and fuel-inefficient means of transport, and the buyer simply pays the extra cost.

2nd point: with respect to Dave’s point about the 4.2L diesel… that is a bad example. Cruising on the freeway does indeed use less fuel than driving in the city – and the same dramatic difference would be would be seen on a more fuel efficient vehicle. Show me the fuel consumption rates for city driving. Plus the additional polution that diesel engines produce when starting and stopping frequently (all engines for that matter, but diesel in particular).

There is a requirement for 4 wheel drives, but I’m pretty sure driving to and from school with the kiddies is not it.

Noel, DDA legislation means new PT vehicles and stops will have to be accessible. Stopping spending billions on freeways and funnelling it into PT improvements would mean a big boost towards entire PT networks being accessible. (And improvements such as accessible tram stops have direct benefits for parents with prams, and able-bodied people get benefits from faster boarding.)

I’ve been saying for ages that I’d be quite happy if the fuel price doubled or tripled – I really think that people would start buying smaller, more fuel efficient cars (and by this I don’t mean family sedans – the aussie family sedan is crap when it comes to fuel efficiency).

I know people already who have downgraded due to the petrol price hitting 1.40 here in Sydney (though it is down again now). If you look at European countries, people tend to drive much smaller cars in general than Australia. On the other hand, if you take a look at the US where petrol is ridiculously cheap then people drive massive cars.

The thing that bugs me the most is that people suddenly think that they need a “family car” (read large sedan or 4WD) the second they have a child – as the Mum of a 9 month old, they simply don’t take that much space!! Certainly I’d have trouble driving a very small car due to the rear facing car seat eating up all the front passengers leg room, but we’re quite happy in a small-mid size car. We get around 9 litres/100km in the city and a great 6 litres/100km in country driving (based on the car computer).

I agree too. As Michelle says, it does have an effect on usage – with the recent falls in petrol prices, sales of 4WDs have gone up again, after they’d fallen earlier this year due to rising prices.

Also, diesel is a different fuel from petrol and one of its benefits is that consumption is lower. Excise on both can be handled differently asa desired, but a change in price will be felt by both. Do the same travelling in a smaller diesel car, and there’ll still be savings, so like should be compared with like.

It is interesting to see how divided economists are as to future petrol prices. Some have the ‘Club of Rome’/ ‘Hanrahan We’ll All Be Rooned’ view: others suggest that reserves are far higher than publicised, and that the world will continue to be well supplied or even awash in cheap oil, and that car manufacturers will continue to be innovative a la Prius.

Also, some toll road companies suggest that higher petrol prices have virtually no effect on user volumes. Perhaps this is because the half of all cars that are registered in Melbourne are fleet vehicles (company cars) and these drivers have a higher propensity to travel whatever the cost.