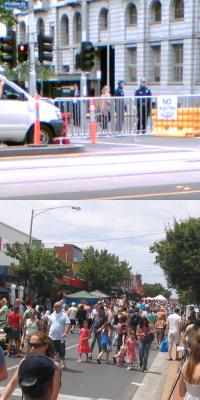 The streets were closed to traffic, the barricades went up. Yes, the Bentleigh festival was on again.

But 15km away from the sausage sizzles, roaming families, showbags and Humphrey B Bear, some streets in central Melbourne were blocked-off for the third day, for the G20 meeting. Hearing about the violence in Collins Street on Saturday, it seemed like a world away.

I can’t for the life of me understand the motivation of the few dozen protestors who turned violent unless it’s simply to have a go at the police, and generally cause trouble. It seems a long way from the vast majority of people attending who were simply trying to highlight important issues such as environmental destruction and poverty.

Bono was on Lateline on Friday night appealing to the Australian government to give 0.7 percent of GDP to aid for eliminating poverty.

I support that. And even better, I’m going to rejig my regular charity donations to make sure I’m personally donating at least 0.7 percent of my income to charity. By my calculations I’m currently over that (1.008%), though some of it is going to Greenpeace, which doesn’t directly work on poverty issues.

Now, when will my government join in?

On a government level, I think how it’s used is as important as how much. A lot of Western government aid has gone back to their own companies due to ‘preferred supplier’ arrangements. Which does not help industries develop in 3rd world countries.

Didn’t Downer recently put in some changes that should make our aid more effective (it was lauded by the NGOs about 1-2 years ago).

Then there is the question of whether we feed aid through (sometimes corrupt and inefficient) governments or non-government organisations on the ground. The first better for diplomacy, the latter possibly better for outcomes.

As for percentages, mine vary wildly depending on which income figure used. On the basis of gross income it’s 0.9%, but on the basis of taxable income it’s 2.6%. But all of it is on one domestic charity (with a reputation for being managed well), so the percentage going overseas is 0%. Might be time for some rejigging here as well.

Don’t you have a hard time trying to figure out which charity (or charities) to give to? Who is more needy? Should I support people living in poverty locally or in Africa? What about environmental causes like acid rain, the greenhouse effect or the extinction of animals? Or maybe I should contribute to finding the cure for cancer or heart disease? The list just goes on and on and only gets harder if you start to take into consideration how much of the donation actually gets to the cause without being diverted for whatever reason.
I finally took my Grandmother’s advice and chose three charities and that is who I give lump sums to annually. Although I still buy chocolates from the local school kids, poppies for Rememberance day…

Mary-Ellen, yes it is tricky – there’s so many choices. Even if you try to be utilitarian and think about what is ‘maximum need’, the ultimate decision still comes down to an extension of your own values, priorities and conception of ‘good’.

Eg making a difference in your community vs assisting those in other countries (who’ve had fewer life chances than even the poorest here). Relief of immediate suffering vs long-term prevention of it. Or even animal vs human.

Then there are the ‘lifestyle’ charities, which fulfill psychological and experiential needs rather than existential needs (eg Riding for disabled, Christmas presents for needy families, etc).