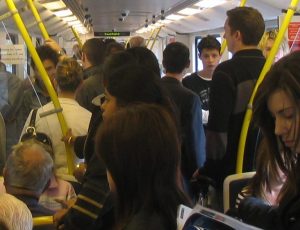 Ever noticed how crowded the trains are on the weekend on the busy lines since the footy finished? I don’t mean on race days, I mean on “normal” weekends. People are not just having to stand, but sometimes it’s a struggle to fit aboard, because they’re running short 3-carriage trains.

It’s not a new thing; I’ve been complaining about it for years, as have others.

And it’s been getting worse, as petrol prices have got more people travelling by train (up 11% in the past year). In one recent extreme case, short trains were left to cope with a crowd of 33,000 people attending a weekend soccer game.

Of course it’s almost understandable that peak hour trains are packed, when (just about) every train is six carriages, and all of the serviceable fleet is in action. But on weekends, when most of the fleet is sitting doing nothing, it’s inexcusable. The government and Connex both claim to want to get new customers onto the train… but anybody trying it out and experiencing these kinds of conditions will go back to their car and never come back.

Connex is just trying to cut costs (mostly maintenance) — they’ve admitted so themselves. Apparently the lure of 40% of any additional revenue earned isn’t enough for them. If the privatised system worked, the government would take one look at the problem and order them to put on more carriages. But no.

The problem has been largely unnoticed, out of the public eye. The weekend before we went to Sydney, on Sunday morning, I got some video footage organised. A few days later I gave the footage to a contact at Channel 7. That night:

Once again, the pictures make the story. After years of being fobbed off, Connex now say they are reviewing the situation. I’ve told them I’ll organise a followup story if they don’t fix it. Anybody want to put money on what happens next?

(Ran into the reporter last weekend. He gave me some useful filming tips for next time…)

Excellent work as usual Daniel. Thanks for your continual efforts to improve the public transport system.
I would be interested to know about the useful filming tips the reporter gave you (or is that privileged information?). I thought the footage on the PTA website gave an excellent illustration of the crowded conditions.

Bang on and top work in raising this.

A whole train’s worth of people crammed into half a train, plus daytrippers bringing their bicycles (it is, after all, off peak).

Last Sunday on the Pakenham line there was a bloke in a motorised wheelchair on the train. When it came to his station the poor fellow was too polite to bark at everyone to clear the way and it took about five minutes for him to get to the door.

Although maybe Connex feel like they’re already infamous for overcrowding and delays, so why not have them on a Sunday as well?

Kudos, Daniel. Well done. That’s the main reason why I don’t travel PT during the weekends most of the time (as well as the sucky timetable). Now I know it’s not wrong for me to take offence to the “Don’t Hold Others Back” ads, considering the fact that I am *always* on time, pay my fair and don’t do silly things like hold doors open. Connex is clearly holding commuters back by not providing the service we pay continually rising prices for.

Looks like you might have had a win there. Well done. Now how about you use those filming tips on a tram on a Sunday, say the 9.55 or 10.25 ex University to St Kilda. It is an embarrassment to Melbourne that after these trams leave Flinders Street Station, pretty well, no one else can get on. That means residents and tourists along St Kilda Road.

You’re right Andrew… that one’s on my list to do at some stage.

Kirsten, it’s nothing particularly secret. The main point was to get shots suitable for editing in cutaways, for instance close-ups of people or shots of crowded platforms that could be used to edit in-between the shots of the crowded train itself. And it would have been good for me to give them all the raw footage, not edited highlights.

That’s great to hear. I’ve avoided PT on weekends as it’s more convenient to drive. Last time I trained in, was to the footy, first week of Finals. Took us over an hour to get home from the G that arvo, where if I’d have driven, we’d have been home (given the traffic) within a half hour.
PS Was your contact Nick Etchells?? :)

Daniel, would you like to move to Brisbane and tackle the transport system here? It’s woeful!

I can understand where you’re coming from, but I don’t think privatisation itself is the problem.

You don’t suppose the PTC would’ve run 6-car trains on weekends if they were overcrowded, do you? :)

Nobody’s claiming the PTC necessarily would do better, but the point is that public ownership and a genuinely accountable and responsive transport authority would have fixed this problem a long time ago.