And so our last day in Sydney dawned. Thankfully the weather had improved immeasurably, and after breakfast we checked-out (more about the total bill later), left our luggage in storage at the hotel (I’d checked — Central Station has no luggage lockers) and caught a train down to Circular Quay. 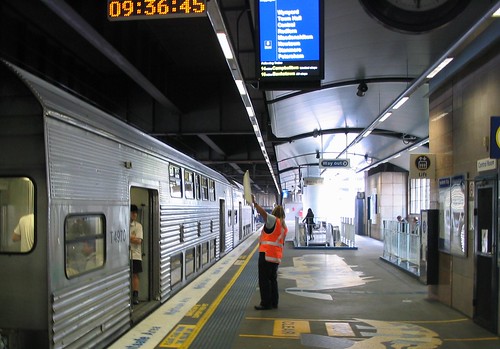 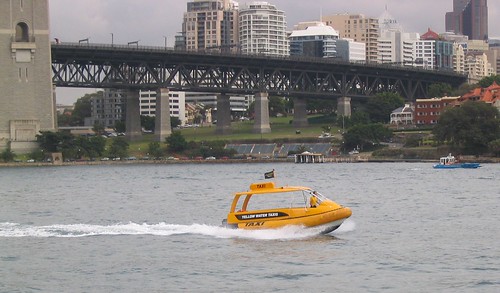 We grabbed a handy dandy Zoo Pass (ferry + zoo admission) and along with many other families and/or tourists got on the ferry to Taronga Zoo.

The plan was to ride the “Sky Safari” chairlift up to the top, then walk back down through the zoo. The plan went pear-shaped when they told us the lower part of the zoo is being redeveloped (something major too; it’s opening in 2008), and everyone had to board buses up to the top and enter there. Hokay… But the good news was the chairlift was running, and so once we’d entered, we went on that first, all the way down, then straight back up again, before exploring the zoo on foot. 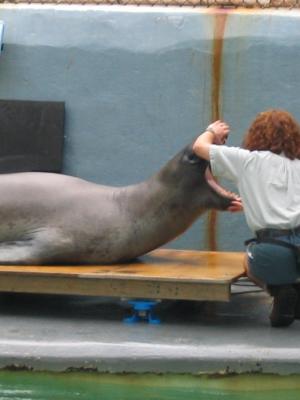 It’s got plenty to see, and we saw most of it: monkeys (the kids did impersonations that were frighteningly realistic), giraffes, the new Thai elephants in their new enclosure, wombats, snakes… well, all the usual zoo stuff, in fact. One highlight was a sea lion being weighed and given a dental examination — which she seemed more than willing to do, in return for lots of fish.

As we walked around, we mostly managed to avoid the legions of school kids on excursions, who unlike us Victorians, didn’t have the day off.

Most spectacular was an enclosure with mountain goats (of some kind, I don’t recall) positioned so that you were viewing them as if they were roaming a mountain habitat… but the backdrop was the Sydney Opera House, the bridge, and the skyscrapers. Very cool. 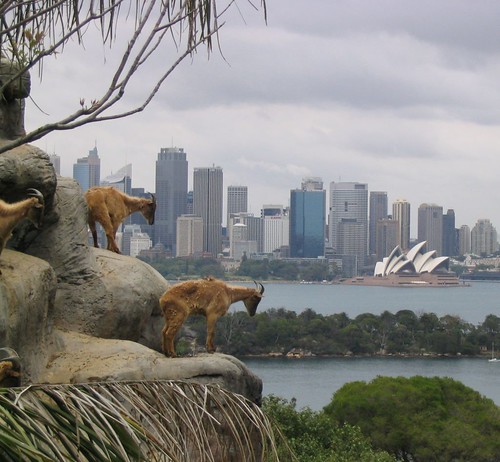 After a bite of lunch we retraced our steps, catching the chairlift back to the ferry, and the ferry back to Circular Quay, then the train back to Museum station to head for the hotel and our bag, with a last minute detour to find a mailbox to send a postcard. It might be my imagination, but central Sydney seems to have less mailboxes than central Melbourne. Or maybe it’s just that in central Melbourne I know where the ones I usually use are located.

After picking up our bags we headed to the airport and checked-in. The auto-checkin computermachine decided that putting us in seats that included a window spot was a higher priority than seating us together. Odd — you’d think the latter was more important, particularly where some of the passengers are known to be children. The human who dealt with our bag said she could move us, and Isaac in particular declared (after being “freaked out” on the flight up) he absolutely did not want a window seat, which amused her somewhat. So we ended up between the two aisles, and all together.

It was nearly 3pm, and we settled down in an airport cafe that had TVs, so we could watch the Melbourne Cup. As the horses lined up, I spontaneously decided I liked Maybe Better — just because of the name. Normally I’d choose a few horses I liked the names of, and put a dollar or two on each one… then lose the lot. This time around I’d had no time to organise that.

As the Cup started the airport seemed to stop moving, and quite a few people gathered around the cafe TVs to watch. Maybe Better came in third, a respectable effort.

Eventually it was time to board, and the flight itself was relatively uneventful. More Incredibles kiddy packs were distributed, and despite leaving a little late, we touched down more-or-less on time in Melbourne. Grabbed our bag off the carousel, caught the Skybus back, and then the train — which we just caught, no thanks to Connex’s SMS timetables advising me incorrectly of the time it left Spencer Street. There were a fair number of drunken racegoers on-board. Anyway, home in time for dinner.

It had been a good break away, if not a cheap one. It’s tempting to think of a short trip like that as being relatively cheap, especially when the flights are subsidised by frequent flyer points, but it’s only when you realise you’re visiting the ATM for the second time in one day and the hotel bill — with all the sundries included — has shot up from the cheap rate you saw on the web that you realise it can be an expensive business.

All up, the costs I can recall are:

So a total of $1254, not including some little things I can’t remember/haven’t counted.

Not that I’m complaining, you understand, but it’s something of a surprise that something that started as “Hey, let’s use up some frequent flyer points to have a cheap weekend away” added up to so much moula.

But of course the main thing was that we had a great time, saw some cool things, and really enjoyed ourselves.

7 replies on “So long Sydney”

No wonder no one uses the Sydney airport train at that price. Enjoyed your Sydney visit tales a lot. Goats against the city skyline is priceless and I will probably steal the image for my own purposes at some point.

The Sydney airport train was certainly convenient, and there seemed to be quite a few travellers using it, but yeah, $12.20 (adult single fare) for just a few stops/km is a bit over the top.

Having recently been to Europe, I found that most airport trains were similar , so $12.20 is not too bad. The Gatwick Express in London was 14 pounds (16 for Heathrow) and I think Charles De Gaulle to Paris was 17 euro (we caught the much cheaper bus).

From Gatwick and Heathrow you have a choice of trains, and both are longer distances than from Sydney airport. Lots of trains run from Gatwick to various parts of central London, and looks like a normal fare on most of them is UKP 9.00. From Heathrow you can catch the Underground (possibly faster for some destinations) costing UKP 4 (cash) for a single. (Does the usual calculation of UKP 1.00 having the spending power of AUD $1.00 still apply?)

What a great trip! Sounds like the boys would have had a wonderful time (even if the plane ride was a little ‘freaky’!)
Love that goat pic, such a great view beyond.

re: Sydney airport train:
1) there use to be an airport bus but the government stopped it, as it was much cheaper than the train and the train was making a huge loss.
2) cheap-skates like me walk 1km from the airport to Mascot shopping centre and catch a $3 bus into the city. I realise this would be ridiculous if you’ve got luggage and two kids!

On the airport train, as soon as there’s more than 2 people it’s usually cheaper to take a taxi if you’re just going to the city….
I used to go to Darling Harbour – about $15 per person on PT, about $16 in a cab.

Last time I was there we were burned by the lack of lockers at Central Station – kinda wish I’d had a bomb to drop off somewhere – perhaps in the idiot’s office who decided that was a clever idea – luckily we were visiting a friend who let us leave our (considerable amount of) stuff in her office. It turns out there’s a place across the road from central that will look after your luggage.