After another buffet breakfast, we set out for a walk around Sydney’s CBD. One of my criteria for hotels was walking distance to plenty of attractions; it avoids a lot of hassle with fares for transport if you just want to wander around.

(It might be worth noting that while Sydney’s public transport fares seem fairly competitive for many individual trips that might be typical for point to point commuters, it’s a very different story for tourists who tend to wander around doing lots of switching between modes. On this I think Melbourne and other cities with multimodal ticketing win hands down.)

We walked up to the Sydney Tower, and I tried to encourage the kids to go up, assuring them that it wouldn’t involve climbing around the outside of it (which is something some brave hardy souls do). I think they were pondering how scary the OzTrek ride would be (it’s also optional, but included in the ticket price) when they decided — at the last minute, at the head of the ticket queue — to bail out and go and do something else.

Watching the grey sky, I pondered doing a little shopping for a rainjacket. The kids have a couple of cheapie ones which were just the ticket for the drizzly weather we were encountering, but my trusty old rainjacket (a little more elaborate, being actually waterproof) had self-destructed several months earlier, with the lining all falling apart. I think I first got it in ’99 for my trip to Europe, so it had a good life.

After wandering around Myer and finding nothing, I remembered the landmark Gowings menswear store nearby from my previous visits to Sydney, and we went to go and find it.

But we couldn’t find it. WTF? They’d been in business for well over a century, yet seemed to have vanished without trace. Turns out that having been in the clothing business since 1868, they moved into investment instead a few years ago, and their famous stores have gone the way of the dodo.

Bloody hell. I guess the phrase “Gone to Gowings” has joined “Faster than a Bondi tram” as a defunct Sydney expression.

On Jeremy’s urging, we went back for another ride on the monorail. This time I bought a day pass; for a family it’s $22 — not cheap, but at least we could hop on and off all day without getting stung for more. It was less crowded this time, and we did a complete loop, then jumped off again for our next task: the park.

On our last visit to Sydney, in 2001 when my sister lived there, we had a little morning birthday party for Isaac in a park near her house. But what sticks in everybody’s mind was that he fell off some play equipment and bumped his head, with much wailing and gnashing of teeth. Isaac’s goal was to find that park… and (I guess) look around, though preferably not repeat the experience.

I’d checked back on a map. It was St Leonard’s Park, in North Sydney, and I knew which bus we had to catch to get there, though I didn’t know where from. We asked at the bus information kiosk outside the (rather nice) QVB, and the bloke said we’d do better to go to the Wynyard bus terminus, so we walked up there instead.

From there we caught a bus that initially went over the Harbour Bridge (my it’s big) then on to North Sydney and up to the park. Isaac was very disappointed to find the equipment in question had been taken away, but the kids both enjoyed playing on what was left, as I sheltered from the drizzle.

We walked back down Miller Street to find some lunch, eventually settling on sandwiches in a food court. I’ve heard of that bit of North Sydney described as a second CBD, and it really is like that… the sure sign is lots of office workers wandering around at lunchtime on foot, something you just don’t see in the suburbs. 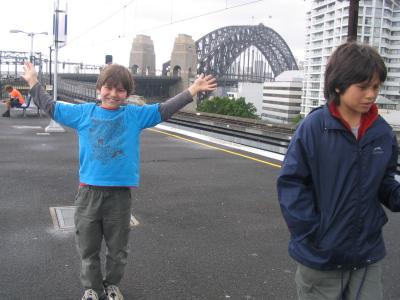 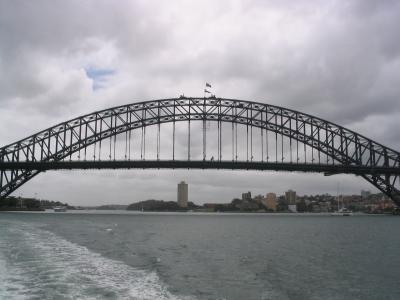 We found the subway entrance to North Sydney Station, and went and caught a train to Circular Quay, with a brief stopoff at Milson’s Point so Jeremy could see if we could get aboard a train newer than the 70s vintage ones we seemed to be continually getting — it also afforded a great view of the bridge — and another at Wynyard to change lines.

From there we headed to the ferries. I spurned the very Melbourne-looking ticket machines to ask a Ferries lady about what ticket I needed to just cruise around for a bit, and we boarded the ferry to Kirribilli. It did a loop around the harbour, and by that point the sun had come out, and we could sit back and relax and enjoy the scenery.

After that we decided to walk from the Quay back up Pitt St back for another ride on the monorail, which we took most of the way around, to the stop closest the hotel. A unanimous vote determined we should go and have a relax in the room and watch some afternoon telly.

By about 5:30 everyone was getting peckish again and we walked up to nearby Darlinghurst to find some dinner, which turned out to be another (cleaner) Italian restaurant. It was spaghetti all round, with me getting the carbonara, and the boys both going for the bolognaise. While Jeremy couldn’t get through his, Isaac finished his completely, which reminds me that he’s getting bigger, and no doubt will soon be eating full-sized adult meals regularly. 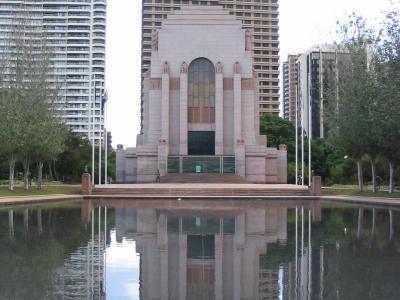 Rather than go straight back to the hotel, we went for a walk in nearby Hyde Park, having a look at the war memorial, as well as some guy trying to do bike stunts. Two fire engines went screaming down Park Street, and we walked up to the very impressive Archibald Fountain (unlike Melbourne’s fountains, it had water; the drought is obviously not so dire in NSW), then we headed back to the hotel.

For once no Simpsons or Futurama on Fox8, but there was Mythbusters on SBS, which made for some fun evening viewing.

3 replies on “Not gone to Gowings – Gowings is gone”

re: Multi-modal tickets. Yes! Melbourne wins hands down. Much cheaper here if you are going all over the place all day, on different forms of transport.

Thanks Phillip. Still markedly more expensive than other cities, though not quite as bad as I thought (the SydneyPass in particular is painfully expensive).