It was a pretty good night’s sleep in our small room, and we got showered and dressed and went down to avail ourselves of the hotel breakfast. We all quickly warmed to the idea of helping themselves to all the toast, cereal, scrambled eggs, bacon and so on that our bellies could handle — no doubt a big part of them giving us vouchers for one day was to get us hooked. I enquired about the cost for the remaining days (without vouchers). $16.50 per adult, $7.50 per child. Not cheap, but worth it I think, given you can get fuelled up enough to avoid eating for the rest of the morning, and there’s no hassle with finding somewhere to eat first thing in the morning. So we ended up having breakfast in the hotel on the Monday and Tuesday too. 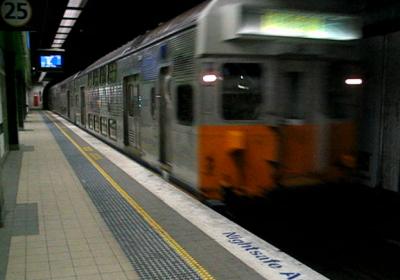 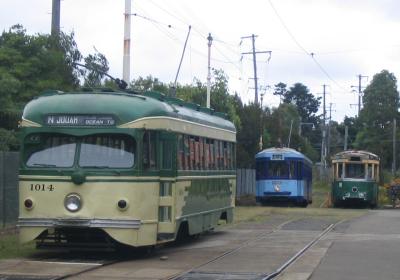 We walked down to Central Station and bought tickets to Loftus. I’d decided to indulge my inner gunzel and see Sydney’s tramway museum. We just made the train (every half-hour; not bad, given the distance) and reached Loftus after about 45 minutes. The museum was right next to the station. Just like a ticket machine, the guy at the entrance had no change from a $50 note. But unlike a machine, he said to just go in, he’d find us later.

They had a number of trams out and about… a couple from Sydney, including an archetypal R class, as well as an American PCC (that looked like a 1940s bus), and another Sydney one painted blue for RAAF recruitment. We made sure to ride them all. The museum has a couple of lines; one heading north for a kilometre or two, and another heading southwest for a couple of kilometres to the national park, including across a major road (with a railway-style level crossing, which most, but not all, cars stopped at).

They also have a shop selling memorabilia and books and so on (in an old tram body, natch), and a pretty big collection of trams in a shed, along with a traverser for moving them around. We clambered through various vehicles from different cities and countries. On a Melbourne tram I showed the kids how to change the route number, and how the stop cord used to work. (We all remember it was one ring to request a stop, and two for the conductor to tell the driver to move off, right?) 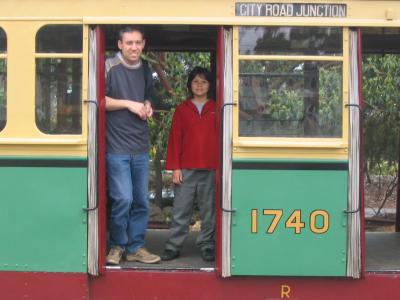 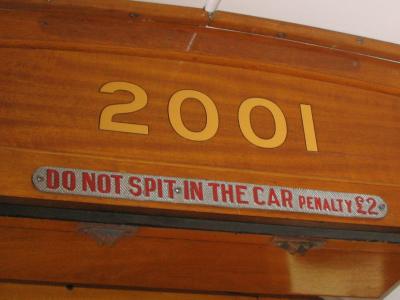 The San Francisco PCC tram was interesting. It looked like a 40s American bus (the interior kept reminding me of that famous picture of Rosa Parks), and had the sort of acceleration that made it take off like a rocket. 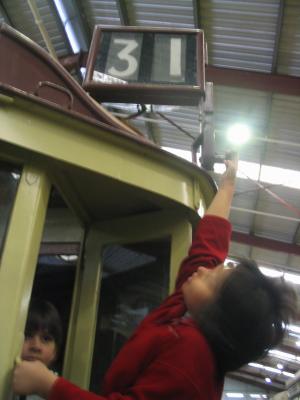 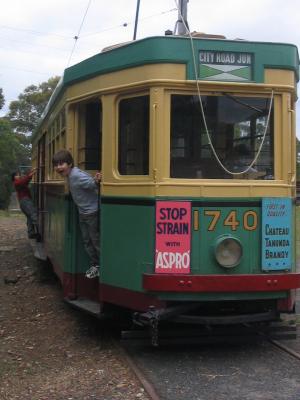 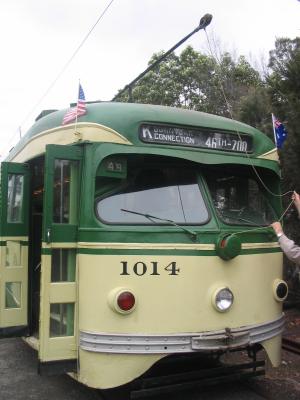 After a look around the museum’s workshops, we exitted (paying on the way out), got lunch, and then caught the train back into central Sydney. We got off at Town Hall and headed up to the monorail station — another thing on the list of vehicles to ride during our stay. The first train that came went right past, out of service, eliciting a “boooo!” from the waiting crowd. Soon a second arrived and we piled in. It was pretty crowded… moreso than you might expect from a glorified joyride costing $4.50 per person per pop.

It was grey and drizzly by this point, and after going most of the way round, we decided to get off at the Paddy’s Market stop, and go to the Powerhouse Museum — we’ve been there before, but it’s always great. Isaac was once again amused to see the robot that shared his name (misspelt though, with two Ss — I don’t remember if the spelling has changed since last time) and the various exhibits kept us all amused for a couple of hours. 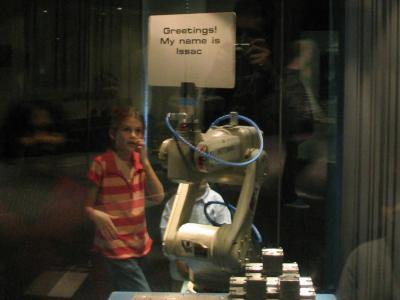 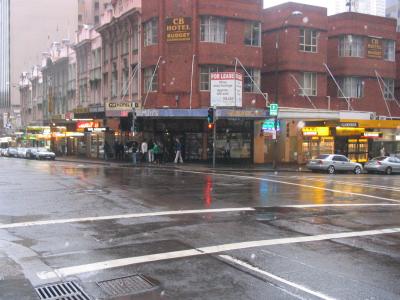 Still raining when we left, and we went to find some dinner. I was becoming conscious of the tendency to drift towards fast food while on holidays, underscored by us having fish and chips (chicken and chips for Isaac), with Jeremy drinking what seemed like his own bodyweight in juice. So after that we found a supermarket and bought some more healthy foods to snack on in the hotel room. I suppose the food thing isn’t as bad as all that, since it’s not the kind of diet I make a habit of indulging in, and we were getting way more walking done than usual.

I had to find an ATM for the second time that day, and suddenly got an inkling that money was draining out of my wallet pretty fast. It was not going to be the budget holiday I had hoped it would be.

Still raining, and getting dark as we headed back to the hotel. At one point I looked up at the Sydney (Centrepoint) Tower, only to see it shrouded in fog. (I tried to take a photo, but it came out all blurry). We got back and watched some more Simpsons and Futurama before bed.

4 replies on “Sunday in Sydney”

> and how the stop cord used to work. (We all remember it was one ring to request a stop, and two for the conductor to tell the driver to move off, right?)

And three rings for an emergency stop.

The monorail is always busy. The first time I went on it, shortly after it stated I suppose, it was $1.50. But tourists just love it. It is quite good fun, espcially when it cuts into the building. Queen Victoria building is it?

Did you get to check out the Lighthorse Interchange after you went to the tram place. Wallgrove Rd, Western Motorway & Westlink all meet = bloody beautiful.

Man that is a good freeway interchange. Hopefully the Monash Fwy EastLink interchange will beat it!

If you hang around here much you’ll know I’m not a fan of freeways… interchanges in particular take up an enormous amount of space. Maybe it looks pretty to some, but it certainly wasn’t a priority for me to see it.