On Saturday I ran around packing up my big backpack full of stuff. We needed clothes for the four days, plus the usual bathroom supplies, plus a book each to read while bored in airports or in the hotel. I also packed my iPod to listen to after the kids had gone to bed.

We set off a bit before 2pm, walking down to the station. The backpack has the right straps so that the bulk of the weight was on my waist instead of my shoulders, which was something of a relief given how big and heavy the thing was. Isaac carried the joey backpack section.

Got to the station to discover the 2:08pm train was running late. Terrific start to the holiday, but thankfully I had allowed plenty of time to get to the airport (as well as flying Qantas to avoid any Jetstar-type 30 minute “sorry you’ll have to pay another fare because we’re bastards” cutoff).

The train took us to Spencer Street, where we changed onto the Skybus. Sure it’s a premium fare, but in fact $30 for an adult and two kids return (valid for 12 months) is, I think, a pretty good deal (even adding a few extra dollars for the train) given a cab would cost at least $80 from home one way. Also I had in the back of my mind that we should aim to use pre-existing, scheduled transport services; stuff that would have run anyway, perhaps in part to assuage my guilt at missing the Walk Against Warming. And we all needed the exercise (though not necessarily with a hulking great backpack).

As advertised, the bus got us to the airport in 20 minutes, though it was notable that the route included none of the traffic light priority that was touted (or at least heavily implied) by the government when it subsidised the upgrade a few years ago. There seemed to be plenty of people on-board though, which was good to see. (I checked with a bus industry contact, and he said they were still working on it.) 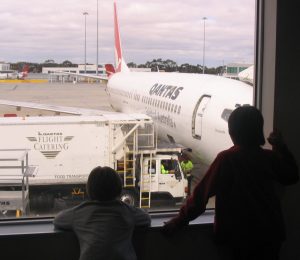 Check-in was quick and easy, and as the luggage conveyor whisked the big bag away (hopefully to be seen again soon), we wandered through the airport to find the gate. Soon we boarded. The kids didn’t have too much trouble working out how to use the seatbelts, and I showed them what all the various buttons did, with a caution not to raise/lower the seat unless necessary, and to go easy with the tray, to avoid bugging the other passengers.

I gave them some gum to chew on, which may have helped a bit with the ears during take-off. The friendly Qantas people gave them an Incredibles activity kit each, and Isaac used the kit’s Magic Slate ™ to write various messages describing how he was enjoying the early stages of the flight. Initially many of them said things like “THIS IS FREAKING ME OUT” and “#$^*?# !!!”. He hadn’t flown in a while, and seemed to spend a lot of time studying the 737’s safety sheet, and as well as avoiding looking out the window.

The flight attendants apologised for the lack of food choice as they gave us bread sticks and sundried tomato dip. I enjoyed it… the kids were a lukewarm on it though. Some turbulence bumped us around a bit, and then we headed in to land.

We picked up our bag (thankfully not re-routed to Morocco) and headed for the airport train. An airport station lady helped me figure out the ticket machine, and happily told us that on Sydney’s Cityrail we didn’t have to pay for the second (or subsequent) child. To this day however I’m still not sure how you’re meant to deal with getting the kids through the turnstiles. Try and send them through both together, or find an attendant? Or can you put the ticket through twice to re-open the gate?

We got off the train at Central (Museum would have been closer, but the train was terminating at Central) and walked up and found the hotel: the Travelodge. After waiting a few minutes in the queue (a bus full of tourists had arrived, and there also seemed to be a lot of Karate tournament competitors around) we booked-in.

The good news was they were giving us a day’s worth of breakfast vouchers for booking online. The bad news was they hadn’t organised the third bed in the room that I’d put in the comments field in the booking, and it would cost another $30 per day. Sigh. 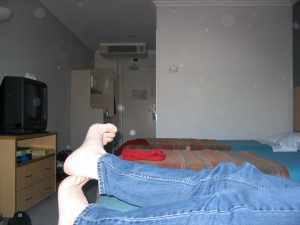 And if I still had any doubts that I should have just booked a bigger room, they evaporated when we got in there. It wasn’t tiny, but it sure wasn’t huge. Sigh. Not to worry, we’d be out most of the time.

A quick check revealed the hotel restaurant only served breakfast; they recommended going out to nearby Oxford Street to find dinner. This we did, eventually settling on pizza at an Italian place which was priced slightly more expensively than it looked like it ought to have been, especially given the slight smell of the seats. But no matter, the food was good.

We bought some supplies (a newspaper, postcards, milk to make tea — the hotel room fridge was bare — and some snacks for the next days’ travels) and went back to watch some TV (Fox 8 was included; I think they should rename it the Matt Groening Channel given the number of Simpsons and Futurama).

I tried to do a little reading when the kids went to bed, but the room’s lighting didn’t make it easy, and I was tired, so just decided to go to bed too.

3 replies on “Setting off for Sydney”

Wow, that sounds like a lovely trip you had. Looking forward to reading more of it. We’re just off before the break of dawn to our airport, tomorrow. My kids (ages 7 and 4) are so looking forward to it. Thanks for the reminder about gum for their ears. I’ll snag some from their Halloween stash, just for that purpose. (Yes, guilty of hiding my kids candy).

Sadly Ottawa’s airport is quite far south of the city centre. For the 4 of us, to reach it by public transport wouldn’t be feasible. The only way would be a OC Transpo bus. The other option would be a Airport Shuttle Bus from one of the major hotels in town, with a premium fee. So, yes, we are opting for the car, and the long-term parking @ $12/day. Not the best option for the planet, I know, but at 4:30 am, really the only alternative, for us. A taxi would be $40 each way. Proponents of a light rail scheme see a future for that to help service the airport. Do I think it’s a good expenditure? Yes, I do.

Daniel, I saw your piece in the paper about short and crowded Sunday trains (in Melbourne). Well done.

Yeah, thanks Peter — reminds me I was going to blog about it.