Here’s my quick reviews of the second half of this year’s Doctor Who. (First half here.) Some spoilers for people who haven’t seen it. (Les, this means you.) 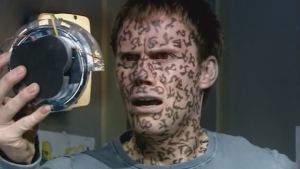 The Impossible Planet/The Satan Pit — Terrific stuff. The tension in the first episode was fantastic, especially when the beast was stalking the archeologist. Scared the crap out of me. Loved the ending. Trivia: Voice of the Beast was done by the same guy who did the voice of Sutekh (also a manifestation of the Beast) way back in 1975.

Love & Monsters — Some people in fandom hated it, but I quite enjoyed this episode. A very quirky story, and I reckon a bit of a piss-take on the fans. And yes dammit, I do like a bit of ELO.

Fear Her — A couple of amusing bits, but ultimately a light fluffy episode that didn’t challenge the braincells too much.

Army of Ghosts/Doomsday — Some genuine surprises with the return of Mickey. But the best bit was the cliffhanger at the end of the first episode, which gave me one of the biggest surprises of my TV-watching career. I think I uttered, very loudly, “Whoa!” as the Daleks emerged from the sphere. (Pity the poor previewers who were denied this in their copies). And the resolution to the story was just terrific.

What’s most notable is that the show is back to being popular amongst the general public — a stark contrast to the closing years of the “classic” series in the late-80s. Even Marita, a notorious non-DW-viewer from way back, said the conclusion was “really good”. Bring on series 3… (Shame Torchwood won’t be kid-friendly.)

Ah, but have you seen Torchwood yet :)

Not yet, but hope to see it soon!

Now there’s a thing, TORCHWOOD, I never spotted it, but someone did and pointed it out to me, it’s an anagram of DOCTOR WHO

Probably old news but I thought I’d mention it.

I haven’t had a chance to watch it as it’s on at a time I’m to busy, but I am getting a *cough* copy from someone apparently.

I love doctor who. It is one of the best tv shows. but torchwood is nowhere near as good! i have seen the first episode and the plot was rubbish. it’s doctor who without the humuor and charm.