Over breakfast we pondered if we should go up Mount Wellington. The night before we’d rung about a bus tour, but looking at the weather that day, with snow forecast for the peak, and a lot of fog visible around the top, it wasn’t looking good. (There’s also a bus up, bike down tour which would be fantastic on a nice day). Eventually we decided to hire a car. Thrifty had one for about $80 plus fuel — the last one they had left, in fact. And as a bonus we could pick it up in the city and drop it at the airport, for no extra charge.

The car was going to be ready at 11am, so first we headed down to the Tasmanian Museum and Art Gallery for a look around. A dinosaur greeted us at the door, and didn’t even charge us admission. Some interesting displays of Hobart’s past (including the whaling — mmmmm… blubber!), Aboriginal culture, and a few other less-related displays too. A notable bit of colonial history was a blue gum couch dating back to the early 1800s. Yep, a couch older and rattier than mine.

Thrifty is just a stone’s throw from the museum (slightly further if you initially walk in the wrong direction, like we did). We picked up the car (a little manual Hyundai jobby) and tried to get back to the B&B to pick up the luggage. Central Hobart is awash with one-way streets, and it took us a little while to figure out which particular combination of them we needed to get to where we needed to be. Add to this unfamiliarity with the car, and the dread of having to do a hill start in traffic, and I wasn’t having a good time during the initial few minutes of driving.

Thankfully there didn’t seem to be many differences in road rules. I’d already noted the UK-style yellow lines indicating parking restrictions, but apart from the one way streets, otherwise nothing seemed different. (As a pedestrian I had noted the pedestrian lights seemed much more responsive than most Victorian ones, and at many intersections they wisely gave pedestrians a few seconds’ head start over cars.)

We managed to find the road up to Mount Wellington. Quite soon we were seemingly beyond the main residential area, the only signs of life being the occasional house and the Hobart “Metro” bus stop signs. A little later even these were left behind, as the road wound its way up the mountain, me gripping the steering wheel and trying not to look over the edge of the road past the guide rail to the plunge below.

The little car did well climbing the mountain, and nearing the top, we found trees with some snow on them. Right at the peak is a comms tower and a car park, and we stopped and parked, then added whatever layers of clothes we could find to have a quick look around.

It was bitterly cold up there, and we initially took shelter in the observation shelter, before braving a couple of the lookouts to take some pictures. The fog had lifted a bit, and we could see some of the city below. Then it started spitting, followed by a little snow, and we high-tailed it back to the car, and headed back down the mountain.

Stopping momentarily about halfway down, it started snowing. The kind of snow you see in movies: big, visible snow flakes. I’ve never been snowed upon before, and it was a nice moment, even if most of them were melting as they hit the ground.

We kept on driving, but instead of going straight back into Hobart, went to the Cascade Brewery. They do tours there, but we hadn’t pre-booked so that wasn’t going to happen. But we did have a rather delicious lunch, accompanied of course with Cascade Lager.

Then onward, back through central Hobart, and out again across the rather impressive Tasman bridge. Down the freeway for a bit then we turned off and headed to Richmond. More and more the country was reminding me of West Sussex where some of my relatives live — very green, but mostly farmland. We initially drove through Richmond and found the bridge: the oldest bridge in the country still in use, in fact, built in 1823. Some ducks were quacking away nearby, and when the drizzle stopped and the sun came out, it was all rather glorious. Quite soon more tourists arrived, and soon they (and us, I suppose) were swarming around taking pictures. We strolled up to the nearby Catholic church (again, the oldest one in the country) and had a look inside and around the graveyard, a very picturesque location on top of a hill, with graves both old and new dotted around. 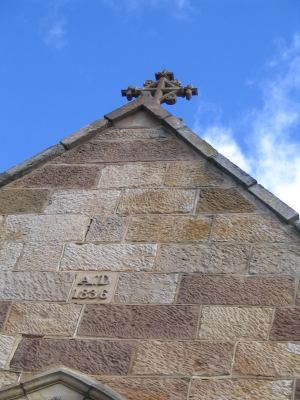 We went back into Richmond proper and had a little look around, before driving to the airport, watching out along the way for a petrol station. I thought I saw one in Cambridge, just before getting onto the freeway, but thought “there’s bound to be one at the airport.”

There wasn’t. The Thrifty people looked shocked that we would have even dreamed that there would be such a thing as a petrol station at the airport, and warned us of the surcharge for filling up the car: basically you pay about double the price per litre that you’d pay if you did it yourself. Well, it was only a quarter of a tank, and a small car, and I couldn’t be arsed going and finding a servo, so I said they could do it themselves. And it turned out to be $20 all up, so for the avoidance of effort, $10 wasn’t so bad. Different story if we’d been driving a 4WD and the tank was empty.

Checked-in and were told the flight was delayed 30 minutes. Sigh.

Went through security and I got randomly scanned for explosives.

Got to the lounge and found…

The soccer club boys. Sitting around a table, drinking beers and possibly looking a little the worse for wear after two and a half days’ rampage through Tassie.

We got a newspaper and some drinks and nibblies and filled the time until the flight boarded. Thankfully we were booked on the Qantas flight, whereas the soccer club boys were on the Jetstar flight that left just behind us. The flight was uneventful. Being Qantas, they had what they claimed was a “dinner service”, though it was just an elaborate ham, cheese and salad roll, plus a small chocolate bar. Better than nothing though.

We flew over the rest of Tasmania, Bass Strait and then over metropolitan Melbourne (with me, bored of the Qantas magazine and having checked-in my novel, trying to spot landmarks), then touched down at Tullamarine, before heading home.

All in all, it was a terrific few days. Hobart was really nice. The people seemed friendly, the traffic (even in peak hour) was okay, and, having recently read the book about Whelan The Wrecker’s career, which documented many of Melbourne’s historic buildings, it seemed to me that the city is being similar to what Melbourne might be if it had stopped growing in the 1890s or so, with so many beautiful old buildings remaining in use.

Maybe I should have predicted this before we went, but it seems like I’ve only had a small taste of Tasmania, and there’s plenty more to see. I look forward to going back.

4 replies on “Caught in the snow”

Sounds like a lovely trip, all in all. LOL @ never being snowed on. Hard for me to imagine, since I’ve never had a winter without snow in my 45 years. I read with interest about Mark Webber, the Aussie F1 driver “Tasmanian Challenge” a few years ago. He hasn’t done it since, but apparently this November will be doing it again. Sure looks like a “challenge and a half” to accomplish! Wonderful way to see the real, rugged Tasmanian countryside, and do it for a good cause, all at the same time. Here’s to getting to Australia, and Tasmania at some point in my life to see it all! :)

A couple of weeks ago we did the Island Cycle Tour cycle down Mt Wellington. The group of us got 7km down the mountain when they called it off due to blizzard conditions. It’s hard to brake with frozen fingers! They said it was the first time in a year they’ve had to do abandon the trip. Oh well. We did the NE Tassie cycle tour with the same mob a few days later and it was great. Tassie is really fantastic!

Here’s the link for the Mark Webber Tasmanian Challenge. :) http://www.markwebberchallenge.com/

Good luck to all the participants!

As an ex-pat Taswegian living in Perth, I enjoyed your little travelogue. I used to live on the slopes of Mt Wellington, and remember getting snowed upon many times!
And you do get used to the one-way streets after a while. If you get the chance another time – there are some fantastic drives around other parts of the State – my favourite was down the Huon / Channel area.
Great pics, btw. Thanks