Where we stayed was a place called the Edinburgh Gallery B&B, which was quite different to any of these. The decor was unlike anything you’d see in most places — comfortable, but quirky. The bedspread was a 70’s style shagpile carpet. There was an African mask above the bed. A huge vase was in the sunroom, which had a floor that sloped down to the window, as did the bathroom.

The bathroom was, in fact, tiny — barely bigger than the bath itself. Careful manoevring was required to get in and out of the shower. While brushing my teeth I had to bend down almost double to fit my head between the sink and the shelf above it. And the shower head was a good 20cm below my height, meaning I had to stand in a very odd position to wash my hair.

Those gripes aside, the room and bed were comfortable, breakfast (a help-yourself job in a kitchen downstairs) was delicious, and the hosts were friendly and helpful. Location was good, too. The only thing missing was the Gallery part of the name — much of the artwork apparently disappeared when the place changed hands recently. 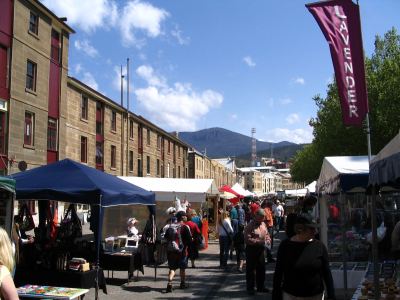 On Saturday morning we headed down to Salamanca Place. The sun was shining down gloriously, and the crowds had come out for market day. Some of the Rutherglen Netball team were out shopping. I suspect the soccer club guys were busy drinking, somewhere.

Salamanca market, for you Melbournites, was a little like a cross between the St Kilda Esplanade (arts, crafts, nice handmade stuff, upmarket touristy things) with a touch of the Vic Market (downmarket touristy things, a small number stupid t-shirts of the type that few people laugh at, and even fewer people wear, and everyday things like hardware).

We found a cafe to eat some brunch (mmmm… Eggs Florentine), enjoy the sunshine and watch the passing parade, then did some shopping ourselves, followed by lunch — just a sausage in bread from one of the market stalls. I noted that some of the other stalls sold Dagwood Dogs, a sausage and batter creation that has apparently recently vanished from the Melbourne Show — probably due to health worries I reckon.

Later we headed for the Penitentiary Chapel, a historic jail. We just got their in time for the 1:30pm tour, with two others and a very enthusiastic National Trust guide. It was terrific stuff, full of interesting trivia about the building, but also providing the context for its creation and use, and anecdotes of the of the personalities involved — convicts, free settlers and government figures.

The building was constructed in 1831, and our guide was at pains to point out that it includes the oldest still standing room in the country, and that it pre-dated the more prominent and popular (with tourists) Port Arthur. In fact there does seem to be a bit of envy/tension with Port Arthur. All in all, a terrificly interesting tour. 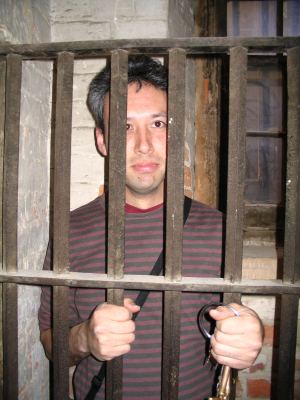 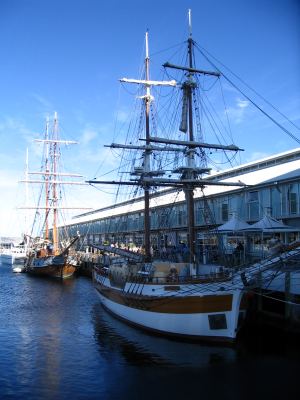 After that we roamed around a bit more around the city centre, through the Elizabeth Street mall (which has a very Spencer Street Station-like wavy roof), and the waterfront, then a walk down to Battery Point, with its charming park and grey monolithic CSIRO facility.

After that we headed back to the B&B to rest for a while and watch the last episode of Doctor Who (natch), then out again for dinner at Fish Frenzy — very tasty — then the ice-cream place (forget the name) a few wharves along, before walking back in the drizzle.

7 replies on “Market and the lockup”

There are still plenty of Dagwood Dogs at the Show, I had one this year! In fact, any place selling deep fried food seemed to have them. Deliciously heart attack inducing…

It all sounds so familiar to when we were there a couple of years ago. So did you like Hobart?

It’s been about 12 years since I was last there – really miss it. Is Muir’s Restaurant on Constitution Dock still going? Hobart also had a lot of one-way streets from memory…

Daniel, that’s not a 70s shagpile carpet on the bed – it’s a very up to the minute, naughties Mink blanket! A thousand acrylics died to make that for your luxurious comfort! I bet the b & b owners shake out of it all the human skin flakes and dust mites bodies every, single time!

yes Muir’s is still going, they do a roaring trade so I guess they’ll be still going for a good long time.

The one way streets are a pain in the neck, especially as they’re doing maintanence on several streets and so everal parts of some two way roads are temporarily one way only…

Someone’s already asked but I’ll ask again, did you like our friendly little island? ;)

Yes Dave and Andrew, I really did enjoy it. (See the final post for my concluding comments). Hoping to get back there before too long.

The little ice-cream place is Sticky Fingers.. a fave of mine ;)