I thought Jetstar liked me, when the lady at check-in suggested I not check-in my bag. It was light enough, she said, that I could carry it with me on the plane, provided it didn’t have any sharp objects in it — which it didn’t. Great, I thought. It’ll save me time.

But soon I discovered that Jetstar does, in fact, hate me. Why? Because not only was I booked on a flight on which there were two football teams and the Rutherglen netball team all going on their end-of-year trips. No, not only that. I was placed in a seat right in the middle of one of those teams.

They were a soccer club from Melbourne’s eastern suburbs. And during the flight I discovered just how loud a soccer team on their end-of-year trip can be.

You’d think the Jetstar practice of charging $6 for pre-mixed spirits or crappy beer would have put them off. But no — this was their trip and they were determined to enjoy it.

As the booze flowed, the noise level rose, and I attempted to bury myself further in my book. There was laughing, there was joking, there was walking around the cabin, there was lesbian pr0n on one of their video iPods. And don’t for a minute think that there was a lack of politically-incorrect comments in reference to the stewardesses.

The soccer club boys were enjoying themselves so much they were wishing it was a longer flight, perhaps to Perth. I was silently thanking the gods that it was a nice short flight.

We landed in Hobart pretty much on-time, and give the soccer club boys credit, they did recognise my status as a civilian, and let me out first. I told them I hoped they’d have a good weekend, and they assured me that that was their intention.

We all climbed off the plane down onto the tarmac (no sky docks at HBA) and I very nearly kissed the ground at having made it through the din with my ears still functioning. 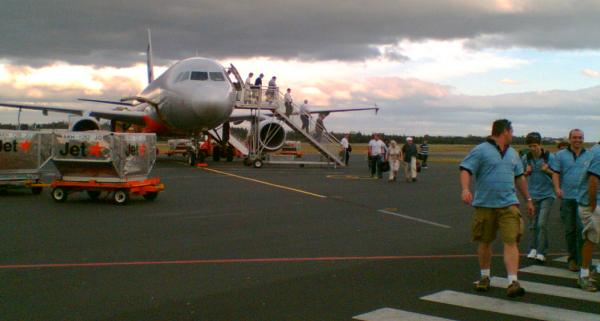 Disembarking at Hobart Airport. The soccer club boys can be seen in their matching t-shirts.

I had decided to catch the airport bus into town, since I knew it went past the B&B Marita had booked, it would be cheaper and almost as fast as a cab. Given I hadn’t had to wait for baggage, I was the first to board, and I watched as the soccer club and the netball club came out of the terminal building and into their various hired buses. A small choir group also came out — I’m betting their section of the plane hadn’t been as loud — or if it had been, it was probably more harmonious.

But I did find the other football group got onto the bus. They were older, and less rowdy. The bus zoomed down the freeway, over the bridge and into Hobart proper. First it made a stop at the Customs House, where the footballers were staying. Then, with Marita SMSing to ask where I was (for we had a dinner engagement) I found myself being taken on an involuntary tour of Hobart, around the waterfront, along Sandy Bay Road (by which point I was tracking our position on the map, and silently protesting “But now we’re going away from where I want to be!”) down to the Wrest Point casino, where more people got dropped off.

After that we went back and finally got to the Edinburgh Gallery B&B, my destination. Lesson: if going to Hobart, the airport bus is a good cheap way of getting into the city, as long as you’re not in a hurry, or you’re heading to the waterfront. Otherwise, a cab may be a better option.

Marita was waiting and there was just enough time to drop my bag off and use the facilities (more about that later) before hopping in a cab to the restaurant. The B&B man, Felix, had very helpfully called the cab, then went outside to wait for it. Then he locked himself out, and had to use our key to get back in…

Dinner was at Annapurna, an Indian restaurant in North Hobart, a spot the cab driver knew straight away, without even having to be told the street or the suburb. We shared dishes between four of us, and it was thoroughly delicious, and surprisingly cheap.

Having no time constraints afterwards, we walked back in the dark, pondering how quiet most of central Hobart’s streets are after dark.

8 replies on “When I get down to Hobart Town”

Outrageous behaviour! How dare you use electronic equipment (ie camera) prior to entering the terminal building. I was told off for doing this on the same tarmac two weeks ago be a Virgin Blue hostie.
PS What’s lesbian pron? I think I met one in Thailand once.

Thing I remember most about driving in Hobart – no traffic jams in “peak hour”! What a joy that was.

If only you were “the b*stard who was carrying the axe” then maybe your surrounding soccer team may have been a little less rowdy and a little more cautious. But then I guess Jetst*r wouldn’t have let you carry it as hand luggage ….

Roger, we were told electronic equipment could be used after the plane came to a standstill. (It was a mobile phone camera). Maybe Virgin is more strict than Jetstar.

You don’t know what pr0n is?

I always feel faintly embarassed getting off the plane in Hobart, worried that some visitor might be looking down on our hokey little airport.

I get over it pretty quickly though – it’s always good to come home :)

Do you think Melbourne should make its Airport bus a bit more like hobarts?

Simon, no. The Hobart airport bus is able to run a few times a day and meet all the flights. Melbourne gets a lot more flights, so running every 15 mins is better. And the Melbourne one can be met at Spencer St by a shuttle to the various hotels, so it effectively does that part of the Hobart airport bus service too.