“The only thing wrong with public transport is the public.” I’m not sure who said it, but sometimes it rings true.

On my train home last night at about 9:30pm, a crazy woman started screaming at nobody in particular. Just a cry of “You f—ing murderers! Nazis!” every couple of minutes.

The train was pretty crowded, and nobody acted with alarm or appeared to feel unsafe, but a couple of people trying to talk amongst themselves or into mobile phones began to move down the carriage.

Then the most amazing thing happened. 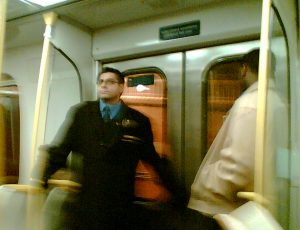 The end carriage door opened and two uniformed Connex security blokes walked through. Yes these are the guys who Connex are contractually obligated to have ride on 80% of train kilometres after 9pm. Yet I rarely seem to see them.

But there they were. Right place, right time.

She might have been a crazy woman, but she knew to shut up then. They appeared to have twigged something was amiss though, and another woman getting off at Toorak had a quiet word to them, and they hung around in the nearest doorway for far longer than they’d normally do.

A third bloke joined them, and they had a word to the crazy woman. Couldn’t hear if she was arguing with them, but it didn’t last long, and they stood back in the doorway, keeping an eye on her.

I got off the train a few stops later, and they appeared to be settling in to keep her company until she left the train.

Sometimes — just sometimes — what or who you need shows up just at the right time.

Geez, I wish they’d ride all the way out my way to chuck the chromers off the train during the school holidays. It’s good that they appeared to be looking out for the rest of the travellers.

I’ve seen this kinda thing happen plenty of times and people just look the other way and take no action. In your case it took a couple of hired security staff for something to be done, but the other twenty or so passengers were condsidered as helpless. Where are our modern day heros?

Action? What action would other passengers take? Ask her to shut up? I can quite understand why they’d say nothing. It’s not like she was hurting anybody.

There was a recent case where a man was assaulted on a train on the Frankston line, and other passengers came to his aid. So modern day heroes do exist.

Some years ago I was on a peak-hour Epping train. At the end of the carriage there was a young man behaving obnoxiously (the train was crowded so I could not see exactly what he was doing). Eventually one of the other passengers had had enough and at West Richmond, a passenger literally kicked him off the train, through the open door. It must have been quite a kick as he was cleanly ejected from the train and slammed into the wall of the ststion building.

The passenger then closed the doors and held them shut. I was at the next set of doors, so I did likewise, I did not want him back inside either. The train started off, and the absolutely enraged young man was kicking, punching and spitting at the moving carriages….I saw him fall over again just as the platform went out of my view.

There was quite a bit of cheering going on in the carriage.

Thankfully I now commute with Vline, and the most I have seen was a group of rowdy but good-natured teens who happily paid their fares to the conductor.

There are no conductors on trams, the drivers stay in their compartments and you can’t tell the ticket inspectors anything. I get off the tram at the first sign of trouble.