A grizzled old man in the supermarket queue tonight was bitching about petrol prices. “It’s criminal!” he was saying. I didn’t feel like trying to explain the concept of Peak Oil to him. Nor did I think telling him it was only going to get worse would placate him.

A more informed response to the issue from Ron Bowden (no relation of mine!) of the Service Station Association on Friday:

“We could do a lot better as a nation if we educated people that high petrol prices are a result of their own indulgence.

“We shouldn’t be trying to make petrol cheaper . . . it’s just making the problem worse for the next generation.”

Nice to see the guys on that side of the fence acknowledging there’s no magic solution to pricing, or that we should be subsidising it even more. There’ll be more on this issue on the telly on Monday night as respected current affairs programme Four Corners looks at Peak Oil. I’ll certainly be tuning in.

Dunno about the grizzled old man. He might prefer Law and Order: SVU or something.

By the way, on the subject of driving, you remember the stupidly placed 40 and 60 speed limit signs? Well the 40 has come a cropper, hit by a car: 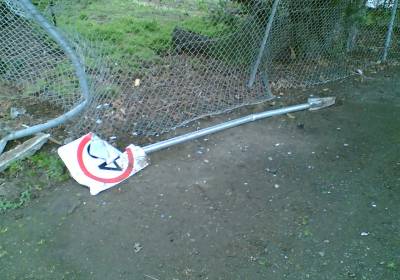 Yes, it really needs to be looked into, to lessen our dependence on oil to run our vehicles. As Bonnie Raitt, that lovely, talented lady who appeared in Ottawa last night said, “My bus runs on biodiesel fuel and so should all your vehicles! Let’s get the hell out of the Middle East!” Right on, Bonnie! My husband went to see the Crosby, Stills, Nash and Young concert with a friend. It was very much “anti-American” foreign policy but they didn’t mention the cutting down on oil. They should have!
Ha ha about the 40 speed limit sign. Some crazy driver. I do hope it wasn’t a drunkard driving. How sad that last weekend, our Holiday weekend for Canada, that in Ontario alone 66 people got arrested for being over .08 by breath testing. The message just isn’t getting through, obviously. *sigh* What’s the limit in Victoria, for the alcohol Breath test?

It is becoming increasingly evident that rising petrol prices are here to stay with continual demand placing a strain on existing supplies.

What is clear is that an alternative to fuel dependence is required and that means that improving public transport is no longer simply a nicety but a necessity to ensure the future economic success of Melbourne and in particular our outer suburbs.

This is why the PTUA is holding regular screenings of the End of Suburbia a documentary that explores the issue of peak oil and the financial strain rising petrol prices are placing on our community.

The next PTUA End of Suburbia screening is on Sunday the 16th of July from 12 to 2pm at the Blackburn Lake Visitors Centre.

A screening is also scheduled for Dandenong and South East on Tuesday the 5th of September.

The onus is on the State Government to finally provide action and not just the routine rhetoric it gives public transport.

You’re right Alex, I should have plugged those screenings. End Of Suburbia is a terrific doco, well worth seeing.

it’s based on faulty science and speculation.

The issue is certainly one of indulgence. Watch the price of LPG go up proportionally in the next decade. Toria the limit for Blood Alcohol Content (BAC) for Victorian drivers, and as far as I’m aware the rest of the country is .05

Well Ned, some of the oil companies don’t seem to think so.

Whether one believes in ‘peak oil’ or not is not actually the core issue in this debate.

The fact is demand is steadily increasing (due in particular to growth of China and India) and for whatever reasons the supply of oil is not increasing to compensate.

As a result,with demand increasing and supply constant prices are likewise increasing.

It is clear that the age of cheap oil is at an end regardless of whether someone necessary believes in peak oil or not.

We are already seeing a downturn in discretionary income – the expenditure allocated towards cinemas, restaurants, the arts and other forms of recreation thus causing negative effects for the local economy.

All this points to the need for an alternative to car dependence – that alternative is improvements to public transport.

As for peak oil being based on faulty science – Hubbert predicted the peak US oil production in the 1970s – history proved him correct.

Blackburn and The End of Suburbia