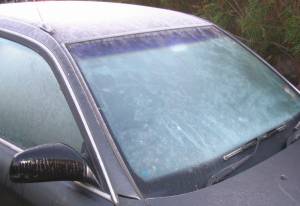 It was the winter solstice on Wednesday, and there’s been cold weather to match it this week.

In Australia, we claim winter starts on the 1st of June. In many other countries, they say it starts on the solstice. By my reckoning, being the shortest day, it should actually be the middle of winter.

I was pondering if one could gauge global warming via some kind of domestic measurement, such as how many days each winter one’s car is frozen over. Seems like less days this year than last, but I think last year I was living in a particularly cold part of Carnegie.

A gas bill arrived the other day. I’d been wondering how big it might be, with the central heating running in the colder months. The graph in the bill, showing average daily usage, says it all: 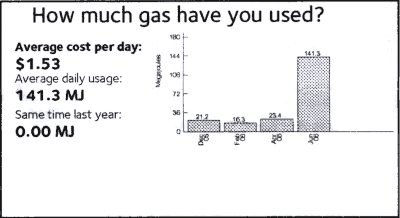 Because I moved, this bill doesn’t show a figure for last year. A quick review of my old gas bills indicate average daily gas use at the old house peaked at 158 MJ in August 2004.

Our weather before the solstice isn’t as cold as the same period of time after the solstice because the ground is still cooling down after summer.

I’m waiting for my next gas bill to compare the cost of a winter on natural gas with the previous winter on bottle gas. I have a feeling we’ve saved a bucket of money.

Should seasons be determined by average temperatures or hours of sunlight?

There seems to be a delay between the two, with the temperature extremes lagging the solstices by a month or so. Otherwise mid-November would be as hot as early February and this is not the case. Is it the thermal mass of the oceans?

I don’t know how the ‘frozen car’ bit would work.

Here in Perth we have had, I think, close to the driest May on record and have had less than 10% of the average June rainfall so far. On the other hand, we have also have some of the coldest nights on record. Last weekend I was driving home at around 2 in the morning where it was -3 degrees outside. The air was so dry though that it was crystal clear: no frost or fogs.

There is definitely climate change happening, and it is happening in strange ways.

Happy Summer Solstice from Norway. I had the opposite experience 9 years ago as we where celebrating the new years eve in Perth. Strange for a Norwegian that it was in full summer as we then have the dark part of the year.

Hee! I moved to Melbourne from Canberra four years ago and the morning you mention is only the third time I have had to throw a bucket of water on the car to remove ice. In Canberra it was a daily event (and normally more than one bucket full) for five months of the year!

Mind you, I have been really feeling the cold on the train platform these last couple of weeks – must finally be acclimatising.

The seasons seem to be really out of whack at the moment. I noticed the trees in our street had burst into springtime blossom – in the first week of June! It makes me feel disappointed we won’t have that obvious “it’s Springtime!” observation when September arrives.