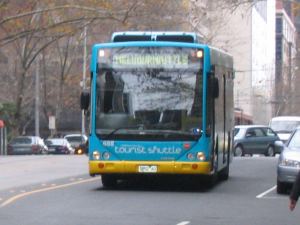 Despite the name, it’s not a shuttle, it’s quite clearly a loop.

I was going to say that unlike the (also free) City Circle tram, every bus I see go past is empty. But it’s not true: I saw one last week that had about 10 people on it.

It’s funded by money from the State Government car-parking levy, which was meant to pay for “urban and transport improvements in the CBD”. Yet it doesn’t help commuters by giving them an alternative to driving in, nor does it do anything for traffic congestion and overcrowded public transport services.

While some tourists might get something out of it, it’s not taking them anywhere they can’t get to by tram, and overall I still think it’s a waste of the $750K per year it costs.

10 replies on “When is a shuttle not a shuttle?”

Most people are going to use it for the free service that it is – as free transport.

For what its worth:

I am not sure about the details of this “shuttle”, but it sounds similar to the CAT services in Perth. (Search for “transperth CAT bus” to find more details.)

These have become extremely popular and are very well used for moving people around the CBD, from tourists to lawyers to business people just tying to get from one end of the city to the other.

They also link with the train station, northbridge (entertainment district), the main bus interchange, the Princess Margaret Childrens Hospital (which is great), and slightly out into the East Perth suburb, which helps the “almost inner city” dwellers feel like inner city dwellers.

Not an evangelist, but they seem to have made a big impact and are very popular.

What tourist would want to ride around on a bus when there are Melbourne’s wonderful trams? Now children, would you like to ride on a nice modern bus around the city or an old tram? The response would be unanimous. Waste of money and I have only seen two people on it, once. Just reminded me, that green tram/bus tourist vehicle in Swanston Street seems to have disappeared.

You’ve read my mind about that free shuttle. I see them lots and they’re almost always empty. I didn’t know it was paid for out of the car-parking levy: that’s ludicrous. It doesn’t go anywhere near lots of free outer-city parking.

I rode the ‘shuttle’ last week. It was quite good, but there were only a few people on-board. I don’t think it’s viable considering the cost and minimal use.

Neil – it is very similar to the Cat services in Perth (I’ve travelled on them) but they’ve got a more extensive route system around the place. These tour buses have one basic tourist route and don’t meet up with any other services as far as I’m aware.

I’m like everyone else – I’ll stick to the tourist tram – far more fun.

Neil, some of the Perth CATs run until 1am, or at least 6pm. The Melbourne “shuttle” only runs 10am-4pm, making it nonexistent in peak hour.

Since it’s only every 15 mins, it’s useless for moving about the CBD unless you know the timetable (which isn’t published), making it quicker to walk in many cases. In comparison most CBD streets have a tram every couple of minutes. And the entire bus route runs within a block or two of tram services.

Like Andrew, I can’t see why tourists would want to ride a bus, when trams (ooh, exotic!) are available.

I wonder if that is the bus service which the good old Melbourne City Council has dedicated half a block of parking for in Elgin Street, just around the corner from Lygon Street. This was done just prior to the Commonwealth Games (thus taking away from the already scarce number of parking spaces available) and as I drive past it quite often I have taken to checking to see whether buses actually use it. Since March I have only ever seen one bus parked there. Don’t know why they couldn’t have just used the regular bus stop on the corner of Elgin/Lygon to do their dropping off and picking up.

Don’t tell me the trams don’t run on Swanston any more! If I ever get back to Melbourne, thats one of the things I’m looking forward to doing!

Nobody said that Bill… if that day ever happens, you can be sure armageddon isn’t far away!