Walk The Line — The story of Johnny Cash, and in particular his drug addiction and relationship with June Carter, based on his autobiography, which doesn’t paint him in entirely a good light. Interesting to see where some of his better-known songs, such as Folsom Prison Blues, and Walk The Line, come from. Really good. Not surprised it won an Oscar. 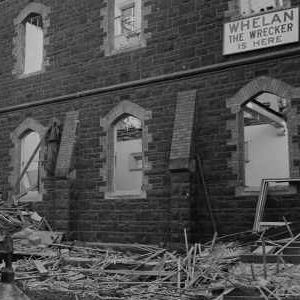 A City Lost And Found – Whelan The Wrecker’s Melbourne — I certainly remember seeing Whelan The Wrecker signs around Melbourne when I was growing up, letting the passing populace know that another building was being flattened. They don’t exist anymore as a family firm, though the brand name was bought. The book covers their century-long history, and with it the history of many of Melbourne’s best-known buildings of the past and present, with plenty of anecdotes along the way. A fascinating book for anybody interested in Melbourne’s history.

5 replies on “Whelan and Cash”

There was an interesting discussion on the Walking Melbourne website about the guilt of the Whelan workers. That is, did they really know what they were destroying? Did they care? With families to support etc, were they in a postition to do anything about it anyway? I guess this is covered in the book. Must read it soon.

The book says that the Whelans had a great appreciation of many of the buildings, and gained insights into their construction as they took them apart (though less so once mechanisation had taken over many of those tasks).

It also argues that some buildings that may have been publically seen as great assets weren’t actually so, for instance the very impressive fish market in Flinders St was quite unsuited to its purpose.

But it also recognises that many fine buildings were demolished needlessly.

That sounds interesting! I’d love to get the chance to fly there and see Melbourne and experience your “mild” winters. Hah! Same temperature on last Saturday in our “summer” as you people in your “winter” LOL!

An off topic comment added too. July 22nd I’m trying to arrange a Mystralia Meet-up. Just a friendly get-together of people who have played the game Myst or URU at some point. For more info check out http://www.mystralia.com and no, it’s not a porn site. Just a friendly site. Why is a Canadian lady taking this on? Well, the organizer is too busy and doesn’t care about it any more. :( So, rather than shrugging and letting it die, I’m fighting to keep the Meet-Up down under alive. http://www.uruobsession.com/forum/index.php?act=ST&f=69&t=25006&s=05f2954c36887abe30c8049b4234ccef is a forum post I did, as well, to promote it. Sorry to clog up your comments with Off topic posts Daniel. I’ll not do it again, I promise. Just trying to drum up interest, and people to attend.

Oh it makes me sad to think that such a beautiful building was demolished just so Melbourne could look more aesthetically pleasing for the 1956 Olympics. Talk about crazy.

I did go and check out that other book which one of your other posters recommended on the history of Melbourne. I was shocked when I read that it weighs 3.6 kilos! Not ideal for my bedtime reading. I will save my pennies up though and get it eventually as it costs $150.

its worth the money. every tiem i dip into it i find out more unique and obscure things i knew nothing about.