Just before the Games, the powers-that-be replaced rubbish bins at the city loop underground stations plus Flinders Street, Richmond and North Melbourne, with big plastic transparent things. For security, y’know. So you can see any suspicious packages that get dropped in, and panic appropriately.

But at nearby South Yarra station, which is probably busier than North Melbourne, they still have the old insecure metal bins. And the shiny new Southern Cross Station has got metal bins too.

Are the South Yarra and Spencer Street people less of a target than those at North Melbourne? Or more expendable? I dunno. 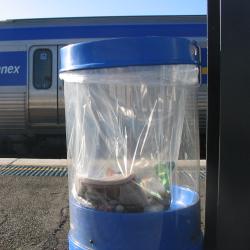 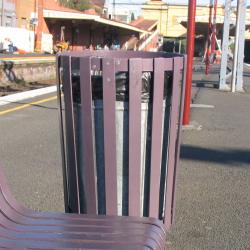 Spencer Street had transparent plastic bag bins when I was there last, just after the Games. Have they been re-deployed to areas at greater risk of rubbish-borne terrorism?

Check that photo of the transparent bin…..
Is that a “suspicious parcel” wrapped in newspapers?

Who gave you permission to take photos on Connex property anyway? You are a security risk!

The athletes village was in Parkville, a ‘burb that uses the Upfield line, therefore they supposed that visitors/atheletes daring to use the public transport system would feel safe at all the stops along the way, at least at the main stations. That’s my convoluted guess.

The first thing I thought when I saw those bins is that it makes life easier for the scavengers; they no need to stare down it or put their hand in to see what’s in it!

In theory they’re a good idea, but I don’t know how long they’ll last. I suspect that they’re indoor use only and an Aussie summer would see them crack pretty soon.

Also most types of clear plastic are impossible to clean graffiti from without leaving rub marks.

Lyn, you’re right re the second example of colour co-ordination. This is quite rare at stations. The interiors, though daggy are functional, and some though has gone into them. However many exteriors are just new things tacked onto old.

Hence you’ll get different styles and material of seating at the one station. Also new things like bicycle lockers, Metlink and advertising signs are slapped up anywhere, obscuring sight lines and pedestrian traffic flow.

A side point: Not sure that South Yarra really is busier than Nth Melbourne, notwithstanding it being your old school stop.

North Melbourne is the Richmond of the north plus all the V/Line transfers. In contrast, Sth Yarra has only one medium-sized railway line (with few significant trip generators) and a tram route. Though that place with those $3 hamburgers, $1 coffee and $1 icecreams might boost transfers a bit.

I guess North Melbourne St. is alot like Richmond but for the West side! – Don’t know why they bothered @ there though considering they’re gonna re-doit in the next few years (similar to “Southern Cross”). I suppose that answers one question though, must be (or becoming) a busy station…

Peter, South Yarra is much busier than North Melbourne. Try eight in the morning at South Yarra when all the private school kiddies are in transit.

The reason Southern Cross doesn’t have the bins might because it isn’t controlled by the same people as every other station in Melborune. Southern Cross Station Autority is in power there – along with their non-standard Metlinkn signs, anti-photography Wilsons security goons, and the blue vested customer service employees. I guess that is what you get when you have a Public-Private Partnership for running a train station.