Near where I used to live in Glen Huntly is the very first house that the now-huge AV Jennings corporation ever built. I seem to recall it’s a brick Californian Bungalow. It certainly doesn’t look like the off-the-plan McMansion-type residences they’re probably better known for building now.

Neither had I thought of my house as being a mass-produced design, until a few weeks ago Marita spotted a clone of it in a street not too far away. 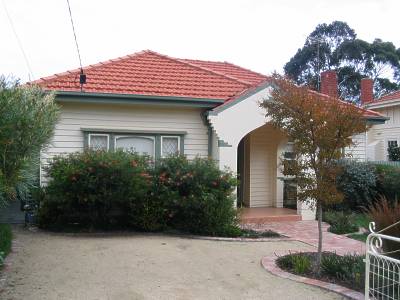 Well, almost a clone — theirs (on the right) has been expanded since building, whereas mine (on the left) seemed to have a few optional additions when built, such as the little picture windows on the side wall of the lounge, and the styled (Arabesque, or perhaps Spanish influence?) front archway. In fact, the more I compare them, the less like clones they look.

Still, it’s the same period (1930-ish), in the same colours, and the same basic design.

9 replies on “The clone of my house… almost”

Is it just the angle or is one roof line different to the other? Ah, I think I can just detect the ridge near the pointy bit of the other house. Nice gate on yours. Does the fence match? Forgotten the name for the syle of style of the fence.

Yes, the roof is a bit different too. My fence matches the gate, yeah… I can’t remember the name for it either!

I could be wrong, but I don’t think that there are too many of these fences around now. Hope you keep it.

Really? hmm. See, it’s in such good condition that I’m assuming it’s only about 11 years old, dating back to the last major renovation.

In any case, my inherent laziness ensures it won’t be changing any time soon.

Maybe I have which house is yours wrong. They show one on top of the other. Thought yours was the one without the timber fence, but an old style wire fence.

Mouse-over and you should get the description. Yes, mine has the wire fence.

I could be wrong but I think your fence is a more traditional “federation” style. I noticed that the people who purchased the house which I used to rent in Flemington (which I still drive past occasionally) had removed their picket fence and replaced it with the same style of fence. I have noticed since that a lot of houses have this style so presume that this is because it is in keeping with the period.

A few years ago I lived in a house in Carnegie (sp?) I forget. But then Glen Huntly? (Glenhuntly). Anyway a mate of mine lived in a house somewhere out past Camberwell. The layout of the two was almost exacly the same. I think maybe those two pictured might be as well.

After that our houses had small diffences. eg his had a third bedroom out the back. Mine didn’t also mine had fancier glass work on the lounge, dining room doors etc.

That’s not Federation. It’s a standard post-war weatherboard house with a brick portico which would have been a bit of Jennings flair, together with the fancy window. A little bit Californian bungalo in appearance but only because of the porch.