Yesterday the Commonwealth Games Queen’s Baton Relay went past my mum’s house. So we decided to go and have a look.

My mum got some chairs out and we sat waiting on the nature strip. After a few minutes, some police motorcycles and a support vehicle arrived to drop runners at the appropriate spots, clear one side of the road of traffic, and block intersections, a bit like when I saw the Turkish Prime Minister escorted through the city. 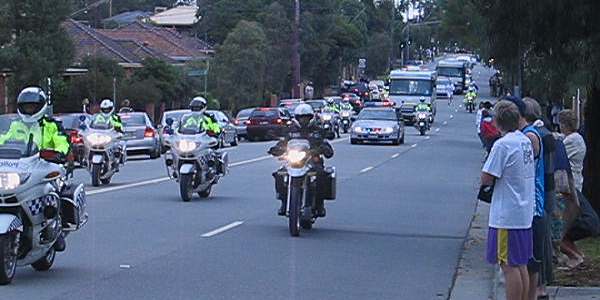 One of the police stopped his bike right next to Isaac and Jeremy, put his visor up and said hello and shook their hands. They seemed quite pleased.

Eventually the baton itself appeared, carried by (according to Google) a trauma co-ordinator from the Alfred Hospital. So, a deserving community member, rather than a bigwig from a sponsoring company. Good. 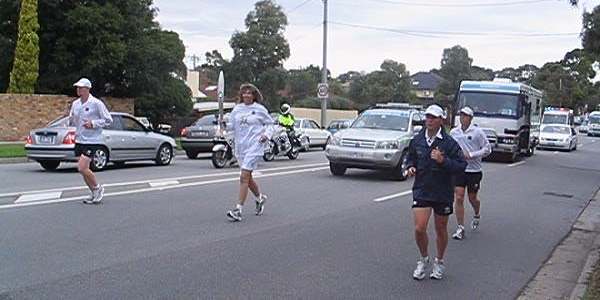 A few more motorcycle police and support vehicles (including an ambulance) followed.

And then the massive traffic snarl behind them all, from people apparently oblivious to the reasonably well-publicised fact that the baton relay would be travelling along there that day. 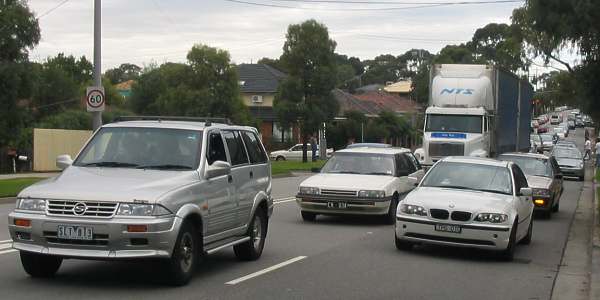 So, all in all… well, it injected a little Games excitement into the good people of Hampton. Though I suspect the motorcycle police escort was more exciting to most (especially the kids) than the baton itself.

PS. I wouldn’t be travelling by road (bike, car, tram or bus) on Wednesday evening in the inner-city if I were you…

Are you bursting with excitement about the Commonwealth Games? Personally, I couldn’t care about it. Hope you have prepared to hug stangers :P :). Are you going to go to Festival Melbourne2006 after work every day as Metlink suggests (to “avoid the crowds”)?

PS. I would try not to travel by tram either

My glimpse of the baton was this morning on the way to work, on Southern Rd in Heidelberg – I saw the flashing lights of the police bikes in the distance and realised that all the people on the side of the road weren’t waiting for a bus (which was my first thought as I was stopped at traffic lights). I didn’t actually see that baton, but I got to hold an Olympic Torch in 2000 and that is enough for one lifetime …