We lived in a number of places when I was growing up, but this block of flats at 62 Hotham Street, East St Kilda, was where we were the longest — seven years, for me from the age of about 4 to 11, covering most of primary school. The place doesn’t seem to have changed much at all since we lived there, except that it has shrunk — the various kids of the block (and surrounds) used to have football matches in the front garden. On hot days in summer we’d set a sprinkler up on the grass and run through it, and marvel at how hot the pavement (then made of tarmac) was.

At the side is a laneway, which goes up to the next street, where our friends Stuart, Lisa and Tracey lived. We walked to school with them. Across the lane was another block of flats, where the neighbourhood kids used to play hide and seek.

At the back of the block is the carpark, still with the ancient garages, with wooden doors that now seem to be rotting. Under the fire escape is a little alcove, which us kids wanted to use as headquarters for our club… whatever that was. The alcove is still there, boarded up. 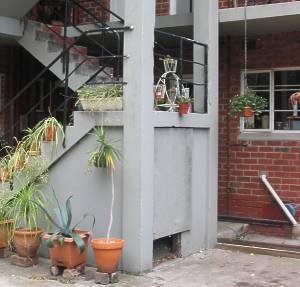 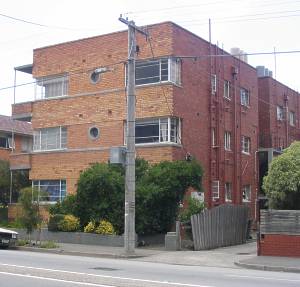 A painted wicket no longer features on the carpark wall. Woe betide anyone who hit a tennis ball over the garages; the neighbour at the back was rumoured to be pretty grumpy.

Some of the first floor residents would try to convince the kids to move from the front to the back and vice-versa, depending on where their nightshift-working relatives were trying to sleep.

I’m struck now by the architecture, which looks to be thirties art-deco, and much more appealing than the other, 70s-style blocks that litter the area. It almost has the air of colonial outpost about it, as if it should be somewhere in the tropics, surrounded by palm trees. Either that or a kind of melting pot for local artists, a creative St Kilda hideaway — like The Secret Life Of Us, but more bohemian.

It was a fun few years, living there as a kid. Lots of happy memories.

3 replies on “Here is my childhood home”

And close to the about to be empty flat at 46 Hotham St. The port hole windows are great but very hard to window furnish, and as they face west, they would need something. I have seen it elsewhere too, but cream bricks must have been dearer than red bricks.

Some might argue that living at such densities is not conducive to a wholesome Aussie childhood* (thus housing commissions have stopped building big apartment blocks).

Your own kids are better housed than you were, so you may be in a position to judge any difference.

From the sound of it you enjoyed it, accepted it as it was, as you either didn’t know better or if you did, couldn’t do anything about it!

(*) as there may be aspects of my own upbringing that would also be viewed as similarly ‘not ideal’.

A very presentable looking pace as far as a block of flats can be. Be happy you have more or less good memories of the place.