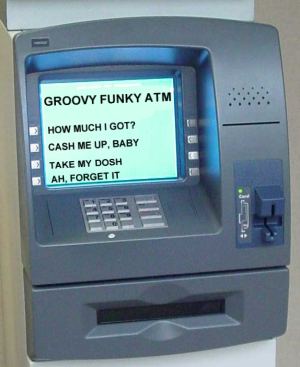 St George will stop allowing 4 free withdrawals at other ATMs for Victorian customers from April, as they reckon they’ve got more ATMs available now. Not as many as the other banks of course, though for me it’s not too bad, as my suburb is one of those blessed with a St George branch, and there’s a couple near work too.

There is something I like about St George ATMs. They have a “favourite withdrawal” facility, which lets you nominate what amount you most often like to take out. In my case (for whatever reason) it’s $90. So if you want that amount, all you have to do is put your card in, enter your PIN and then the Favourite Withdrawal button. Very quick.

What I don’t like about St George ATMs (compared to the Commonwealth ones I’ve used in the past) is there’s no option to see your balance on-screen, avoiding having it on a little bit of paper you subsequently have to throw away.

Favourite withdrawal is an interesting feature. Many of us withdraw what may seem to some, odd amounts, such as your $90, or in my case $80 or $180. Does anyone not know why we do that?

A suspect the no on-screen balance is a security measure… perhaps a misguided one, as a piece of paper with the balance printed on it is less secure than a transient value shown on screen.

Fifties should be easier to get rid of than twenties. Any cashier would know how many thousands of people use twenties and how the difficult notes to find are tens and fives when you have to give change. A fifty is easier to change than a twenty because so many people will have tendered twenties in the preceding transactions.

The Commonwealth Bank has a programming problem with its older ATMs. When asked to display the balance on screen, there are three things that can happen:
1. The balance appears simultaneously with the card being returned, and its disappearance is triggered by the removal of the card, so the user will often miss it.
2. The balance appears in advance of the card being returned and can be read properly by the user (this is a rare case).
3. The balance is not displayed at all, and another attempt is required to get it.

I always withdraw 60 or 80 as you are then guaranteed to get 20 dollar notes (unless the machine is out of em). If you can wade your way through Citibanks atrocious customer service, and get a ready credit account, you can use the ATM card at any ATM and are charged no fees apart from the interest if you are in debit.

My usual is $90 because (I think before the tax laws changed) if you withdrew $100 or more, you got stung for extra taxes.

Sorry Daniel, so you don’t do it for the reason some of us do. I did actually ask did anyone NOT know why some of us withdraw odd amounts. I will spell it out. For me it is because I want twenty dollar notes. Only once in my life have I been given a $100 note, not from an ATM. Scary thing it was too and I got rid of it quickly.

I withdraw $130 as there’s 4 x $20’s, just because they are easier to use for lunch, coffee and other small purchases.

Having your balance displayed on the screen can be seen by anyone standing behind you. Printed on a piece of paper isn’t highly visible and, although wasteful, is more secure. As long as you take it with you and dispose of it properly.

Golly, what part of Hick am I from? Our ATMs, colloquially referred to as Tyme machines, give out 5s and 20s. Some only give out 20s. We have a Fast Cash button, some of them are for $20, others for $30, still others for $100. My account is usually quite bare, and I’m given to using an ATM for a small denomination more to find out my balance than to use the money I get.

when i worked for colonial state bank we had one of the last ATMs that dispensed $10 notes at the lobby of our building. we guessed it was because we were paid so poorly they had to make that last $10 available to us :)

oh, and st george machines in nsw that i’ve used give balance on screen.

i used to love testing the ATMs… monopoly money pouring out of them!!

Aaah, the days of $10 notes coming out of the (NSW) State Bank ATM. It certainly was a sign that a) $10 went a lot further than it does now and b) I wasn’t paid very much doing my after school job.

If I remember correctly these ATMs also had a voice that spoke to you the whole time – in an Australian accent (!).

In a way it was better than that sodding girl with her smug manner that appears all the way through a transaction on the Westpac machines with voice bubbles: “And don’t forget to take your receipt…if you requested one”.

Here in the United States our ATM machines dispense 20 dollar bills. (We call our paper money “bills”, not notes.) I have never seen a machine dispense a 50 or a 100 dollar bill even when taking out several hundred dollars. Here it is considered rude to offer a 50 or a 100 for a small purchace. Many bussiness places will not accept anything over a 20 and have a sign saying so at the register. When I visited Australia for the first time I was quite suprised when a 50 came out of the ATM. I thought where the hell am I going to spend this without an apology to the cashier. I was surprised and relieved to learn that a 50 dollar “note” is easily spent in Australia.