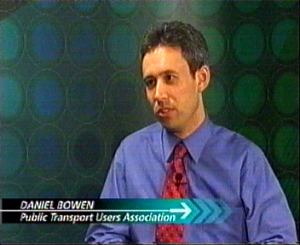 I’ve done a lot of TV interviews on location, but never in a studio, until today. Community TV station Channel 31 did an interview for tonight’s “C News Focus” story on public transport. The interviewer guy asked a couple of curly questions, so hopefully I acquitted myself well. It airs at 10:15pm.

If I look uncomfortable, it’s because they asked me to put the microphone lead inside my shirt.

The interview went for 6 minutes, but they were intending it to go for 5. So it may get edited down a bit.

They put some makeup on me, but they didn’t try and hide the pimple below my mouth. I’m hoping it was out of shot most of the time.

A lot of people get pretty bad channel 31 reception. Amusingly, so does their office, with big TVs in the foyer tuned to their channel appearing very fuzzy.

PS. 11pm. Not too bad. Having watched it, the only glaring slip-up I noted is that the host made a comment about the PT system costing $1.8 billion per year, and I didn’t pick him up on it (because I didn’t have the correct figure in mind at the time). This is not the case — it’s about $500m a year. It should be cheaper (it was only about $374m a year in the 90s) but it certainly isn’t $1.8b. The higher figure appears to come from an opinion piece by a road lobbyist in The Age last week, which inflated the numbers.

Darn Foxtel doesn’t show C31 :(. So I won’t be able to watch you. Does anyone know why not?

(And my antenna was damaged by wind some time ago)

Thanks for the heads up, the show had just started when I changed to C31. So far the pimple has not been seen…

Aurora Community Television (D183) has started showing quite a few shows from Channel 31 so I hope to see more shows in the future.

Got in my car last night, came tootling out of the garage at work, adjusted volume on radio and lo and behold the car was filled with the dulcet tones of one Mr Daniel Bowen! WTG Daniel and yes they should bring the connies back.