The gas people finished their upgrade on Friday, and I found a note in the letterbox telling me I had a nice shiny new gas meter, and that it was turned off, and how to turn everything back on.

Following the instructions, I started with the stove… after much spluttering it seemed okay.

Hot water service… well curiously it seemed okay. Plenty of hot coming out of it. So, what else?

Central heating. I was just pondering how I was going to get on with this without having the instructions, when I found the instructions. Bless her, the people who used to live here had left them in a cupboard. 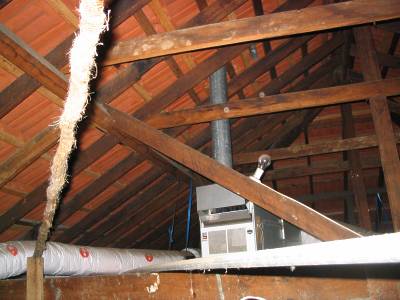 Reading the instructions it rapidly became apparent that the visible controls of the central heating, the thermostat on the wall near the front door, wasn’t where the pilot light needed to be lit. There was another unit, somewhere. I had a thorough look around the house for it, and couldn’t find it. Must be in the roof, I thought.

I gave my sister’s husband Adrian a ring. He is now the default point of contact for all things house or building related. I can’t tell you how handy it is having an architect in the family now. He also reckoned it was in the roof, and given I don’t have a ladder long enough to reach the trapdoor, volunteered to bring one over.

We had a look with a torch and sure enough, there it was, happily sitting about 3 metres from the trapdoor. I tried to see if I could shinny up there, but (insert chicken noises here) couldn’t see a way of doing it without putting my weight on bits of the ceiling I wasn’t sure would take me, or bumping my head on a pipe directly above the trapdoor.

Adrian, being the skinny, agile, braver soul that he was, happily went up there, and got the thing re-lit. As thanks I bought them dinner.

But now I regret not going up there myself. I don’t know why I was so hesitant. Both the central heating and the old water heater are up there, as well as some of that horrible loose insulation stuff, so obviously various people go up there from time to time. Another thing for the list of things to buy, perhaps once the back room is tidy enough to fit it, is a tall ladder, with first priority being to go up in the roof and have a good look around.

…
Fast forward to this morning. The water heater hadn’t, of course, re-lit itself. With the hot weather over the weekend, it took three days for it to run out of hot water. Thus, since I was in a hurry to get out of the house this morning, no time to fiddle with the pilot light, and a cold shower for me.

Thankfully easy enough to light tonight, when I had a moment to read the instructions.

7 replies on “Lighting the pilot”

Wow, so clean, where are the 50 years of cobwebs and dust??

How interesting. Around here, we all have basements and that’s where things like water heaters and furnaces go. It’s much easier than an attic, I think.

A cold shower in that heat sounds like a good idea, really.

Central heating is easy to relight, I’ve been doing it for years. Though ditto what Paul said – who cleaned up all the cobwebs?

If one ventures into the other’s domain, they’re considered fair game and have no-one to blame but themselves when the blood flows.

We use our roof to store non everyday things such as Xmas stuff and the kid’s old clothes and toys ( it takes me a few years to throw them away – you never know when you might need them again! ). Hubby hates me sending him up there and I do it at least 3 times a year!

Daniel, it is a good idea to know about what is inside your roof. But go up there in your own time and have a good look around. You should come down with more questions than you had when you went up.

Amy, often in Australia these items are outside the house altogether, a preferred option, space permitting.

the entrance to our attic is through a tiny trap door in a store cupboard off one of the bedrooms. It’s an almost identical layout to the one in the film The Grudge. We watched the film shortly before moving into the house and have been too scared to actually go up into the attic. We’re only renting the house for around a year or so, so we’re not too bothered about using the attic. Of course this means that all the cupboards are full to overflowing.