Sunday started out so well.

Stroll down to the shops to buy ingredients for muffins, and get a newspaper.

Lunch with globetrotting Doug in Kensington, where he was in residence for the morning. (Marita and I rolled in as some of his other friends rolled out). Much laughter with the discovery that Doug had watched the Hungarian National Day fireworks in Budapest in 2004, while 200 metres away Marita lay unconscious from jetlag in the hotel adjacent.

By 5pm my tummy was rumbling.

By 7pm, a slight ache. But I was hungry, and ate a nice dinner. 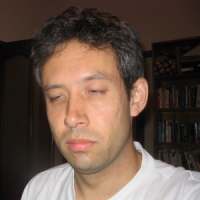 By 10pm I’d gone home. A stronger ache, and I was kicking myself for not having bought some Mylanta at the supermarket. Was in no mood to go down again, so went to bed.

Midnight came and went, as did 1am. About that time the nausea came to the fore and I made use of the bucket.

Regular readers might know, as my neighbours now do, that when I’m chucking-up, it’s never a quiet experience. It’s never all at once, either, but a series of protracted episodes.

The fourth and final episode was around 2:30am, and whatever it was my body had been trying to purge from the system tasted really foul. I suppose if I had had the foresight to save it, it could have been subjected to chemical analysis, but I was just relieved that I finally felt better, the stomach ache had gone, and I could finally get to bed for some rest.

I feel better today. Glad I’ve got one more week of holiday.

7 replies on “From good to bad”

Daniel
you poor guy! It’s a toss-up whether it’s better to be sick when you are on holiday-leave or on a work day. The worst thing is being sick on hols away from home.
Rog.
PS Are your boys OK? (In our family, the kids sometimes pick things up from us)

Hoep you are feeling fine by now. I’d rather chuck and get it all over with when you feel like that. At least it’s over and done with and you do purge the “bug”

I hope you are feeling much better now. It is never much fun throwing up and I am glad it has now stopped.

Take care of yourself and I hope things continue to improve from now on.

have fun convalescing – be sure to load up on so-called Comfort Foods – they’ll get you back on track quick smart!

After suffering numerous bouts of gastro (dont u just love having kids) I found the best pain relief for the after effects of the upchuck – Buscopan – it does something really nice to the poor stomach muscles that seem to feel cramped up after the massive upchuck.

Hope it works for next time – and there will probably be a next time…..