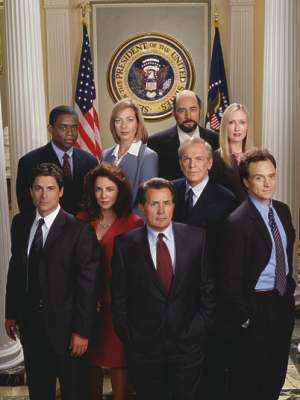 The hot rumour is the ABC has bought The West Wing off Channel 9, who couldn’t have programmed it in a worse manner if they tried.

I’ve been watching DVDs of the series courtesy of my sister. And let me tell you, it’s rivetting. This is political drama at its best.

(Mind you, I’ve heard some of the more conservative Americans don’t like it, evidently because the characters are too small-L liberal. I don’t know if the same people refuse to watch The Sopranos because they don’t like organised crime.)

I watch very little TV nowadays, having become way more discerning in my old age. But this is top of my list right now. If the ABC is intending to run it from the start, in a decent timeslot, it should be a must-watch for anybody into good drama.

The other shows in my regular watch list are: The Sopranos, Six Feet Under, Doctor Who, MediaWatch. That’s pretty much it at the moment.

Stop at the end of Season 3… or after the election is won halfway through it. It all goes downhill from there. I still weep for my favourite show this decade.

And WHY exactly are our conservatives called LIBERALS, if they do not have liberal attitudes, but in fact the complete opposite? Typical backwards Australia…

This is why I spend more time playing WoW than watching telly. The only things worth watching for the entire year was Spicks & Specks, The New Inventors, Rockwiz and occasionally, The Glasshouse.

Each to their own Sussy — I didn’t watch any of those this year, except as you say, occasionally The Glasshouse.

My wife and I went West Wing crazy and watched a ton of it at once. It gets played at least twice a day on one of our cable channels here in the USA, and every few months there’ll be a marathon where about a dozen episodes get played. Tivo catches them all for us, gawd bless it’s little chips. It’s a bit unrealistic to see how insanely witty everyone is, though, with perfect quips dripping from everyone’s lips, but it’s a great show and we’ve enjoyed it. The new episodes are pretty good, with Jimmy Smits and Alan Alda playing two heavyweight politicicans.

It’s not doing well in the ratings though – I read it was in 34th place, or something. Commander in Chief is #1 right now, with Geena Davis playing the first female president of the USA. It’s very lightweight compared with West Wing, but we’re watching it anyway…just not very closely :) Deanne thinks they’re helping soften up people’s attitudes so Hillary Clinton will have an easier run in 2008. You heard it here first!

I tend to wait and see what other people rave about, then buy the show on DVD (e.g. Sopranos and am now thinking about ’24’).

However, Six Feet Under is one that I did watch on tele and committed many late monday nights to. Channel 9 have managed to go this whole year without playing any of the last season, although they have it. Even though I think the show was faltering through the fourth season, I would have religiously watched the fifth, if only they’d shown it.

As a former American politico that’s moving to Melbourne on 27 Dec, I’d have to agree about “The West Wing” jumping the shark after the first few seasons. Great TV when it first came out, mostly rewriting of the Clinton years, but now it just sucks.

Huge fan of ‘The West Wing’, I’ve actually downloaded (yes it’s wrong but…) all of season 6 and what has been shown so far of season 7. I’ve got all other seasons on dvd. Channel 9 has always treated this show horribly, late timeslots and moving it around every few weeks, no wonder it didn’t rate. I hope if it has been sold that it’s treated right this time.

Oh and for those that thinks it’s jumped, season 6 and 7 are very different than the others and I think almost like a new show.

Hi Daniel
A few years ago I wrote to you suggesting that what you needed to solve your TV viewing blues (after watching the video of your VCR destruction!) was a TiVo! With a TiVo you can just indicate the shows you’re unterested in and your TiVo will grab them for you, no matter which channel they are on, or when, as Brian above says “Bless its little chips!” At that time TiVo was a real geek toy, requiring solid Linux know-how and days of effort to get it functional in Australia but now a reasonably PC literate person can have one up and running in an hour!

Although you might think “I don’t watch enough TV to warrant it” I’ve found that infrequent TV viewers often get the most benefit from a TiVo because it means that on the rare occassions that they feel like watching TV there is always something available that’s worth watching! I don’t watch much TV either, but when I hear somebody say “show X is great” or I see a hot review I tell TiVo to grab it, then check it out when I feel like it. If it’s great I’ll have a heap of it to watch, and if I don’t like it I just delete it! TiVo will change the way you watch TV!

Check out http://www.oztivo.com for the Aussie TiVo Users website!

G’Day Daniel:
Some bits of West Wing are quite good. The thing to
note though, is ta the producers are insanely liberal and there is a strong liberal bias in the program. That being said, I’ve been surprised occasionally when the show promotes and strong conservative theme.

WRT SciFi … Dr. Who is good. BUT the new version of BattleStar Galactica is very good. In the very first episode, here was a dig at MicroSucks about how networked computers are a military vulnerability. Good Science Fiction is based on good science and the really good stuff deals with the sociology of future environments. How do people relate to each other when the norms of society are different from what they are now. STNG was a master that that for the first few seasons. A good example is how a society functioned when it was illegal to be heterosexual. Another good series is the “Giants” series by James P. Hogan. His first book, “Inherit the Stars” starts off with a human body found in a spacesuit on the moon and carbon dating determines it to be 50,000 years old. Now time travel involved. How did it get there. Good science and an outstanding story.

The West Wing is the best TV series ever to screen…I’m glad to read there are other strange beasts out there like us, particularly Australian’s, who tend to mock local politics but who love a story about American politics. I guess it’s even more strange when Australians think American politics and politicians are so “over the top”. The West Wing theme tune makes my heart shudder but the accompanying images of Martin Sheen pounding his heart make me want to vomit at the same time. A show of complete contradictions!!!
Anyway, I’m really peeved at channel 9 – I thought I was going mad at the start of the year when it just stopped screening. I was thinking “did I miss something?” How could that ever happen (choke, excuse the sarcasm) – especially when 9 moved the day and time slot so often (ending up at 11pm) it’s no wonder it never got a fan base (other than the hard core fans like us!).
Now I read the ABC are showing it in 2006, but starting back at series 4 (see their own website – http://www.abc.net.au/corp/pubs/s1527025.htm right at the bottom). So by my reckoning, we won’t get new WW until 2007 at best, even if they cram series 4 & 5 into 2006 – unlikely. So we are left to get series 6 on DVD – a year after series 5 has screened on TV but series 6 DVD box set has only just released in the UK. Do they expect any decent fan to hold off for a legitimate Aussie release of the DVD’s (only plus I can see at this stage is that it will release on HD-DVD by the time it comes out!!!)?
Still, I think the show is great, even series 4 & 5 which seem to get so much heaped on them. Good to see an Aussie blog on a great US show.