A huge crowd for the demonstration against the Federal Government’s industrial relations reform package in the city today. Work commitments meant I couldn’t join in, but I did pass nearby and saw all the people.

This is the crowd outside Flinders Street Station at 9:50am, as snapped by the Omni webcam. 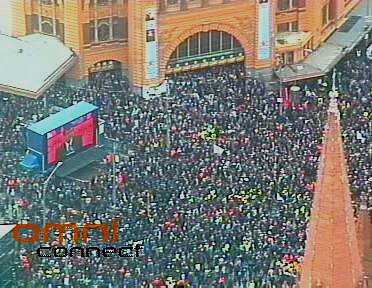 In the nearby arcades, the cafes were full of people getting their morning coffees before joining the march.

Later Marita rang from the end of the march, the Carlton Gardens, to gloat that they got a Paul Kelly performance of “Little Kings.”

PS. 8am Wednesday. The Age reports the crowd was between 150,000 and 210,000… the biggest ever for a rally in Melbourne. From what I can see, with such widespread opposition, including from church and welfare groups, there’s cause for great concern about the impact the laws will have.

I had a little chuckle that it was “work committments” that prevented your participation in a protest against industrial reform aimed at protecting workers from unreasonable working conditions.

I went. We pram bearers took up the rear positions in case we had a toddler chuck a wobbly and needed to escape. Felt a bit like a misplaced Mother’s Group.Quite a few grey haired protesters out there as well. The octogenarian in front of us didn’t quite make it to Latrobe st but at least he gave us an excuse to walk really slowly pushing our heavy prams up the gentle incline of Swanston st!
I made a cool poster of John Howard with vampire fangs in photoshop this morning which went down well. Never been ‘knowingly’smiled at so many times in my life!

Unfortunately, Karyn, some of us have lots of bills to pay and already work in less than lovely conditions as it is. I personally couldn’t risk it. Those us who cared and could go, did. Those of us who cared and couldn’t go, didn’t, but were there in spirit and our discontent will be voice the next time we get to vote these guys out.

The pictures are very impressive though. :)

Perhaps I’m biased as I have relatives that are members of the Liberal Party :P

I’ll be voting for a party that removes these laws.

I missed it due to work commitments too. Self-employed, you know. But I was there in spirit. I don’t want my kids to be forced to endure the kind of treatment that these “reforms” will permit.

I don’t think that the new IR laws are unreasonable. I actually think that they will improve things once the dust has settled. sure I can understand how some people might feel about them. After all noboddy likes change. With the new INDUSTERIAL relations system it is quite a big change. I’ll be voating Mr Howard back in at the nexst ellection. With regard to people who are going for their first job. you’ll just hire a bargaining agent, LIKE YOU WOULD HIRE A LOYER IF YOU HAD TO TAKE SOMEONE ON LEGALLY.

Somebody: Well, it’s not just the usual (ALP and ACTU) opposing this. The Salvation Army. And the Australian Christian Lobby. And the Anglican church. And the Catholic Church. And the Brotherhood of St Lawrence…

Christopher: hire a bargaining agent to get your first job? That’s dream land. Who could afford that? The more desperate you are for the job, the less likely you are to be able to afford someone to represent you, and the more likely you are to accept an employer’s unreasonable terms and conditions.

Bargaining agent for a first job? Yep. Sure. I can see heaps of 15 year-olds doing that when McDs or HJs try to wittle their wages down to $3.75 an hour.

And personally, I’d hire a lawyer if I was to take one someone legally. But that’s just me. ;) The nexst ellection ought to be good too. I’ll be voating labor, though.

Well Daniel, if you want me to tell you the blunt truth, my opinion on these sort of things are: