In summary: it’s done. And I never have to move again. Which is good, because I have too much stuff, and I hate moving.

Possibly I was over-compensating for the last time I moved, when the movers turned up to find many as-yet unpacked boxes, and the truck headed off leaving a lot of little stuff to be moved later. The plan this time was to get friends to help move the little stuff on the Sunday, then the movers could do the furniture on the Monday.

Friday night and Saturday, Marita and I packed many boxes of stuff. Many many boxes. We did a run of clothes and some other stuff over to the new house, then went back and packed some more. Sometime about 4pm we ran out of boxes, and headed over to her house to get some more.

Back to my place with more boxes for more packing.

Marita pointed out how useful it is to label boxes properly, so you know later what’s in them. That’s some advice I really should have followed.

At about 11am the kids arrived, and were set to work packing their toys up — along with a well-timed clear-out of stuff they had grown out of. It’s a godsend having a young nephew to hand stuff down to. Even if he’s not quite ready, my sister can put stuff into storage for him. She says it’s all in the garage, sorted by age-group.

We broke for lunch at midday, then kept packing. Andy arrived and mowed the grass, as part of the “Here Mr Landlord, I’ve tidied everything up for you” ex-rental procedure. 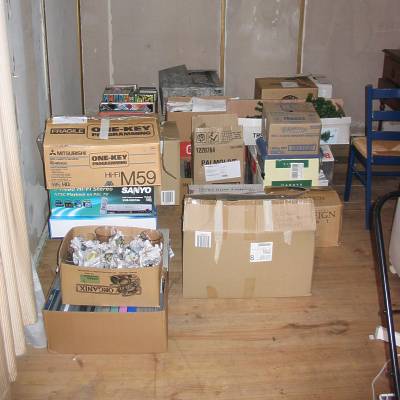 I’ve helped a few friends move in the last few years: Josh & Cathy; Tony & Rae… it was time to call in the favours. My sister Susannah & Adrian came too — I didn’t actually help with their physical moving, but I was the one who signed the purchase contract in their absence. Around 1pm they started to arrive: Josh in the Festiva, Rae in her stationwagon, Susannah & Adrian in theirs. Later my mum and Peter with the ute.

I’d intended to have a shower before they all arrived. It didn’t happen, and still wearing the previous day’s clothes, as I sweated through the afternoon, I must have started to pong. But nobody said anything.

With five vehicles between us, it only took two loads each to move all the boxes down. Josh managed to pack an incredible amount of stuff into the tiny Festiva. He said it was like a TARDIS. I wasn’t watching closely, but I can only assume he didn’t pack so much stuff into it that it resembled Mr Bean’s Mini in the episode where so much stuff is in it he has to drive it by sitting on the roof.

When the last load was complete, we made cuppas for everyone using my mum’s thoughtfully provided Emergency Tea-Making And Chocolate Biscuit Kit.

After everybody had gone home, I unpacked a couple of boxes and tried out the dishwasher. It stopped midway through and started beeping, complaining of “U1”. Whatever that means. Not even Andrew’s dishwasher tips could help with that. Could be time to contact Fisher & Paykel for a manual. Rebooting and setting it back onto the rinse cycle appeared to satisfy it.

Then I headed back to the old house for one last night there with just the furniture for company. I arrived with fish’n’chips, ready to settle down on the now cushionless sofa to watch Casanova on the telly.

Then I discovered the remote control I had carefully left aside on a bookshelf had been found and packed and shipped to the new house. I couldn’t work the TV without it.

Hmm. Okay, so it would be a quiet evening reading my book.

Rather than bore myself to tears reading and re-reading the newspaper, and noting that there was no toothbrush, toothpaste or shaver left in the house, I gathered up a few more things and took another car load down, returning with the toiletries, my book and a wrench which I realised I was going to need to disconnect the washing-machine. (But I didn’t bring back a remote control; they were all buried somewhere in a huge pile of boxes.)

I awoke at 6:15am as the light streamed-in through the piss-weak blinds. (You know; the ones I’d have instantly replaced if I owned the place).

I got up, read the paper, then attempted to make myself breakfast. The only food left in the house was in the fridge. There was plenty of milk, but no breakfast cereal to enjoy it with. There was bread and crumpets, but no toaster, and no match to light the griller. I lit the oven, and heated up some bread.

The movers arrived just on 8am and proceeded to pack the truck. It wasn’t Shaun & Sean this time; but Mick and Jase. Jase was the younger of the two, did most of the talking, and later noted with approval the Gorillaz CD in my collection. Mick was an older bloke who occasionally made amusing remarks, most of which I couldn’t comprehend on the first go. They both stopped every so often for a smoko.

Each of them lifted heavy furniture solo in such a way that, frankly, left me feeling quite inadequate as a man. The only things that they resorted to carrying together or with the aid of trolleys were beds, the washing-machine, the trampoline and the filing cabinet.

As they worked, I tried to look busy. I’d be carrying some pissy little bag of coathangers to my car, and see Mick or Jase stroll by with a humungous bookshelf on one shoulder.

Things were quickly packed. Mick noted that I shouldn’t have bothered emptying chests of drawers. And they moved the filing cabinet without asking for it to be emptied. When all was packed, they headed off in the truck to the new house. 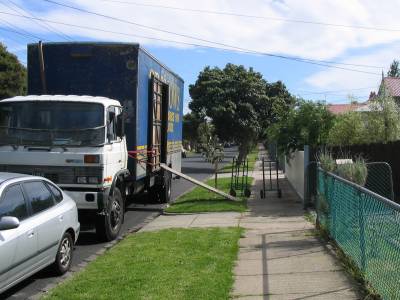 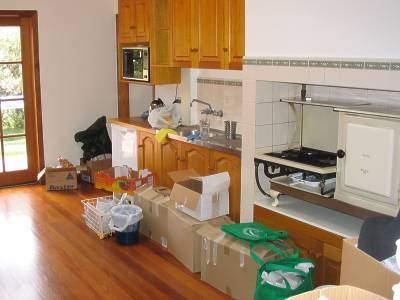 Unloading was pretty quick too, with me directing where things would go. The fridge turned out not to be so humungous as suspected, and fits into the space reasonably well. As I thought might be the case however, the kitchen table however needs downsizing; it’s too big for the space. Ditto the desk (which looks too corporate anyway).

The trampoline didn’t fit down the side footpath; a shed blocks part of the path. They looked at various options, including taking it through the house, or through a neighbour’s garden and over the fence, but nothing would work. Partial dissassembly was going to be the way to do it, but banging it with a hammer didn’t help at all. Admittedly it was a small, pathetic hammer, to which Mick made the Crocodile Dundee-esque remark “You call that a hammer?”

The solution was found when Mick noticed the cast iron water meter cover in the front garden. A couple of bangs from that and the legs of the tramp came off, and they carried it through then put it back together. Good to know those things have a use.

When the movers had gone, I sat down and contemplated the enormous number of boxes of stuff. About 60, many piled up in the “spare” room (aka the junk room).

I set about unpacking things, trying to work out where things should go, trying to find the essentials for the next 24 hours. I rigged up the washing-machine, but found when I turned on the tap that water went everywhere. On closer inspection, the pipe connector had split. Off to Bunnings to get a replacement. I noted on its installation instructions that it warns not to tighten it too much, nor to use tools for attaching it. Whoops.

Come the evening, the kids were home, and we kept unpacking. Tragedy struck when we couldn’t find the cables necessary to hook up the TV and VCR in time for Doctor Who. Ah well. And it was takeaway for dinner.

Many, many boxes remain packed. A number of things remain, essentially, lost in said boxes. It’ll take some time to get everything unpacked and put away.

But the move is done. It’d be nice to think the planning made it go relatively smoothly, but actually it was thanks to the efforts of Marita, Isaac, Jeremy, my mum, Peter, Susannah, Adrian, Leo, Rae, Andy, Josh and the good people at Gronows Removalists.

PS. I have too much stuff, and did I mention I hate moving?

10 replies on “The final move”

Gee, wouldn’t it be funny if you had a VCR box that said “Sharp” on it? HAHAHAHAHA!

Ah, the dreaded U1 !!! We’ve had E1, U1, etc etc. Fisher and Paykel products are terribly overrated, we have had nothing but trouble with our dishwasher (which is now out of warranty). The only good thing we’ve had from them is the dryer which is totally fabulous and means you never need to iron shirts again (as long as you take them out of the dryer and hang them up the moment it finishes).

Take two.
Why do people take manuals for appliances with them? Anyway, the dishwasher manual should be available online at http://www.fisherpaykel.com.au/dishwashing/dishwashers/models.cfm

I second the “I hate moving, etc, etc.” having done this over the weekend. I went up and down the spiral staircase at my old place and the staircase at my new property that I am now giving serious consideration to entering the annual run up the Empire State Building competition. My thighs were screaming for mercy by Sunday and I ended up sitting in my new abode having a good old self-pity cry late Sunday afternoon and cursing myself for having so many clothes that the one of the railings in my new “never before had one” walk-in robe had collapsed under the weight and a whole afternoons hanging up of clothes was back where it started.

I did love it this morning though when walking to Seddon station for the first time and being greeted with a loud, boistrous and very merry hello by the nice Italian man walking home with his newspaper and bread. I suddenly felt like I had arrived in Yarraville!

P.S. I meant to say I went up and down the stairs so many times.

Congrats on the move!

Andrew, alas the web site only has the latest model Nautilus manuals… which don’t include the U1 error.

When I moved into my own place my first instinct was to take a hammer and smash a big hole in the wall (because it’s my house and I can smash the walls up if I want to).

But I thought better of it.

I don’t like moving. The last time I helped my parents move, I was so tired by the end of the day that I was backing the car into trees.

The person who moved into my parent’s old place only took 1/2 an hour to get their stuff in as all their extended family turned up.