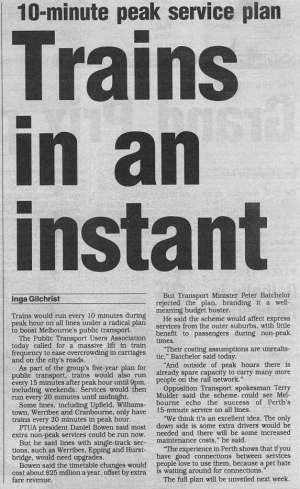 Trains in an instant

Trains would run every 10 minutes during peak hour on all lines under a radical plan to boost Melbourne’s public transport.

The Public Transport Users Association today called for a massive lift in train frequency to ease overcrowding in carriages and on the city’s roads.

As part of the group’s five-year plan for public transport, trains would also run every 15 minutes after peak hour until 9pm, including weekends. Services would then run every 20 minutes until midnight.

Some lines, including Upfield, Williamstown, Werribee and Cranbourne, only have trains every 20 minutes in peak hour.

But he said lines with single-track sections, such as Werribee, Epping and Hurstbridge, would need upgrades.

Bowen said the timetable changes would cost about $25 million a year, offset by extra fare revenue.

He said the scheme would affect express services from the outer suburbs, with little benefit to passengers during non-peak times.

“And outside of peak hours there is already spare capacity to carry many more people on the rail network.”

“We think it’s an excellent idea. The only down side is some extra drivers would be needed and there will be some increased maintenance costs,” he said.

“The experience in Perth shows that if you have good connections between services people love to use them, because a pet hate is waiting around for connections.”

The full plan will be unveiled next week.

Naturally, lines already having peak services more frequent than 10 minutes would retain them. Good to see Terry Mulder come out in support of the idea, noting Perth’s success in improving its rail service.

Unfortunately Peter Batchelor misses the point. Lines that have expresses wouldn’t be affected, because they mostly already have peak services every 10 minutes or better. And to claim it wouldn’t help outside peak hours is to ignore the current overcrowded services (due in part to use of short trains on many lines). But in any case the purpose of more frequent off-peak/evening/weekend services would be to attract more users, not alleviate overcrowding.

The idea is to move the rail system towards the “just turn up, there’s a train within a few minutes” model seen in so many cities across the world, to make trains a “mode-of-choice” for more trips and encourage people out of their cars.

Not exactly rocket-science, I’d have thought. Nor that radical either.

9 replies on “Trains in an instant”

Daniel, I belong to a knitting group and the girl who organises our chapter which meets in Yarraville, is currently trying to garner support for better services for Yarraville. I am all for as I will be moving into my new home in Yarraville tomorrow and was aghast when she told me that peak hour trains run every 20 minutes and I have been giving serious consideration to training it to Carlton from Yarraville. I noticed when I was looking around Yarraville for a property that there have been a significant number of multi unit/townhouse developments going up in the immediate area and obviously the powers that be in planning should realise that this only impacts on what is probably already a service already stretched to its limits. The other people in the group all told me that they travel to Newport or Willy to get their trains. So much for encouraging people to leave their cars at home. I am going to recommend that she contact the PTUA for their support as I think she is currently doing her protests as a one man band.

Hi Lyn… there was a public forum about the poor state of Yarraville/Seddon train services in August. I don’t know what the outcome was, but your friend might like to contact Councillor Colleen Hartland (Sheoak Ward, City of Maribyrnong), who arranged it. And do make your feelings known to your local state MP and newspapers. Trains every 20 minutes from a station so close to the city, let alone in peak hour, is ludicrous. And they wonder why the WestGate bridge is so crowded…

Seriously, stopping the train at those stations only adds an extra two minutes onto the timetable. Since I sit on that exact train the length of the entire ride from beginning to end, 2 minutes ain’t going to make a difference.

And Peter Batchelor gets around in new cars and tax-payer-paid petrol, of course he wouldn’t understand the dire state of western suburbs transport.

The general reckoning is that each extra station stopped at takes an extra minute, all-up. But the plan isn’t to stop trains at all stations; it’s to run more trains.

The public meeting in Yarraville about the train service was sensational, and we had another one a few weeks ago.

We have had a dismal response from both State Government and Connex. They told a public meeting with 50 people they were going to give answers to the community’s questions, then months later haven’t done anything and won’t even reply to any correspondence.

It’s not just the 20 minute train service, which would be bad enough on its own. We have no loop trains in peak hour at all. None.

Also, whenever a train breaks down on another line, Connex run 3-car trains on our line or Upfield, to avoid paying a fine for cancelling a train. This means people actually get left at stations like Seddon, on their way to work or school, with 20 minutes to the next train, because they can’t fit on the 3-car train. This is only going to get worse, with the change in demographic Lyn mentioned.

Also the pedestrian crossing at Yarraville is an accident waiting to happen. Kids and adults run across the tracks with the boom gates down every day. In fact, the boom gates often stay down so long, I’ve hardly met a person who hasn’t run across at some stage. There used to be a pedestrain underpass, but it got blocked off. The Transport Minister won’t reply to our correspondence asking for re-opening the underpass (or building an overpass) to be investigated – it could potentially cost practically nothing if the underpass is dug out and passes a safety test, yet it would prevent an almost inevitable accident.

Well, Daniel, you are right about our local Greens councillor Colleen Hartland. She’s been a brilliant advocate for our trains (she uses trains every day as her main form of transport), and she’s helping the community take action. The next thing she’s doing is co-ordinating a community volunteer-run survey of the dangerous rail crossing, so we will then have proper statistics to scare the government with (“x kids run across the tracks every day”). Anyone available to take part in this should contact me on [email protected] and I’ll pass it on to Colleen.

Lyn, why would they go to Williamstown to catch a train to the CBD? The trains that stop at Yarraville stations are from W’town anyway, so there is no improvement in frequence. I can see why they would go to Newport though (to get the more frequent trains coming through from Werribee).

Ideally IMO an extra track should be added to Newport. The current two tracks isn’t enough with Express Suburban Trains, All-Stoppers Suburban Trains, V/Line Geelong trains and the odd BG Freighter having to share one lousy track for each direction.

The Frankston Stopping All Stations line is so bad it’s a joke. This morning not one but two consecutive morning peak hour trains were cancelled. I had no choice but to catch a bus to Gardenvale station to catch a Sandringham line train to the city. And it was five minutes late. Most suburbs (including Frankston Express) have five to ten minute peakhour services while we are lucky to even get 15 minutes if all trains ran. Overcrowding on trains and infrequent services are a day to day occurance on my line. The Government and Connex don’t give a stuff about the poor quality of inner suburban services. 20-30 minutes in peak hour is an absolute joke. How are we going to cope come Commonwealth Games time? Melbourne’s public transport service is one of the worst in the world. And there will be a fare increase come January.

30 minutes in peak hour? Are you thinking of the Cranbourne line out at the wee end (Cranbourne & Merinda Park stations) out in new estate land? Because thats the only place. And 20 minutely is only found at Seddon/Yarraville/Spotswood/Nth W’town/W’town Beach/W’town stations and the Upfield line.

Mr “Somebody in the WWW” I am not referring to Cranbourne, I am referring to services to Glenhuntly, Ormond, McKinnon, Bentleigh, Patterson, Moorabbin and Highett stations. Peak hour to and from these stations are at least 20-30 minutes, it isn’t restricted to Williamstown and Upfield. Cancellations are a daily occurance, it has gotten worse since Connex took over. And the older Hitachi trains (which will NOT be phased out contrary to what Connex said) are a common sight on my line. Connex believes that these stations (as well as Williamstown and Upfield) are “low-patronage” lines. I was hit with THREE consecutive cancellations on my line tonight while the expresses were running as normal. Obviously this was a “business” decision. Well Connex will be losing “business” if they keep this up. Melbourne’s public transport system is the worst in Australia and the world. With the Commonwealth Games coming soon, expect more packed trains, reduced services and jacked up fares.