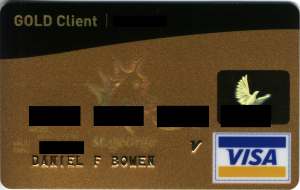 Over the past few years, the banks have stood accused of piling on bank fees, reducing branches and staff, and generally treating their customers with contempt. While this has been happening, they’ve focussed on their most profitable customers, rewarding them with shiny cards, priority phone lines, and something close to obsequiousness.

Having got a home loan (which actually kicks in next Thursday when settlement occurs), I have been elevated into St George’s Gold client list. I thought they were polite before, being an up-and-coming smaller bank keen to gain customers, but ho boy, they’ve been out-doing themselves now they’ve realised how much interest revenue I’ll be pouring into their coffers.

They’ve given me a special phone number to ring for enquiries, so I can bypass the pleb phone number. There’s no queues, the operators actually know what they’re doing, and if in the rare event they need to put you on hold, the hold music is actually listenable. I rang yesterday to enquire about a couple of things, and the lady immediately swung the taskforce-like resources of the Gold section into action, getting a credit card activated on the spot, guiding me through the web site to find the PDF form I needed to change an account setting, telling me to write “URGENT REQUEST” on the top of it, and personally telling the people in the accounts section to “go look at their fax machine — there’s a Gold customer waiting for a response, dammit!”

And they’ve given me a special gold ATM card. A replacement for the rather plain looking red one they only gave me a few weeks ago. It’s got the secret phone number on it.

They phoned me up to let me know to collect my special gold card, and to say I should switch my dull black plain Visa card (with a $30 annual fee) for a Gold one (with no fee, for life). What time would be convenient for you? 3pm? See you then!

I got to the bank, and the bloke I had an appointment with was chatting to another customer. Virtually before I could blink, he handballed her piffling query to someone else, and offered me a seat, apologising for even being occupied when I happened to walk in the door.

He handed over my new ATM card, and attempted to get my plain Visa upgraded to Gold Visa. When the computer said No, he rang the Gold commandos, then the personal credit section, to get it sorted out, all the while telling whoever he got on the phone that he had a Gold customer sitting with him, so drop whatever you’re doing and fix this, now.

Someone put him on hold. As I sat there, rather bemused by it all, I could see the sweat, feel the fear, that he had this Gold customer sitting waiting. After ten minutes on hold (apologising all the while) he hung up and tried to get it fixed by phoning up somebody else. As he rang around the various departments of the bank, I could imagine various staff dropping whatever it was they had been doing. “Gold customer in trouble! Override the computer! Stat!”

His frustration grew. At one stage he told another staff member: “Well the computer won’t let me do it. I just want to know if someone there can override it, or if I have to cancel the card and apply for a new one, which to me seems like a waste of the bank’s time and the customer’s time.”

Eventually he suggested I come back another time, and he’d have it sorted out. He rang back later to say it had been done, I just needed to come back in to sign a form. When would be convenient? Not Friday… Friday is casual day at work, and if I’m going to be treated as a Gold customer, I probably need to look the part. I’m going back in on Monday. I think I’ll wear my best suit.

Earlier, on my way up to the bank, I had passed a homeless man. Sprawled on the pavement by a rubbish bin outside the Novotel, as better-dressed people, including myself, passed him by. An outcast, he lay on the bluestone, ignored by those present on the street, and by society at large.

The Man is courting me in pursuit of dollars. Many others are treated like dirt by The Man. And for The Man, some just don’t exist at all.

13 replies on “The Midas touch”

Daniel
to paraphrase your experience with the bank: if you pay them tens of thousands of dollars in interest payments, fees and charges for 25 years, you can save $30. Bargain?

Was the guy you met your designated ‘personal banker’, or will you have to retell your history to different people every time?

It might also be worth asking about the merits of a ‘professional package’, which many banks offer but don’t advertise.

These have a flat annual fee, but for people with over $250k of loans (particularly investors) this can be more than worth it for the savings conferred.

BTW, ‘dressing up for the banker’ went out as soon as they approved the loan, so I wouldn’t bother!

Roger, you have a bit of a handle on it, but the interest is enough, we don’t pay fees and charges.

Peter, I also agree with the dressing up point. They are smart enough to overlook your standards of dress now.

Daniel, you should have roused the man and asked him if he had heard of ComSec?

Had a strange dream about a bank last night.

Can’t help thinking it was influenced by this blog (and getting a letter wanting me to increase my credit card limit ‘thanks to my excellent payment record!’ earlier in the week).

Was waiting at the counter and got invited to go behind the counter. Luxurious and way bigger than normal. They wanted to ‘upgrade’ my account and gave me a list of trivial general knowledge questions that I had to answer – nothing to do with finance. In turn I wanted her to explain how I’d be better off and she went away for extended periods. So, unlike Daniel’s experience it was a wasted effort. I can’t recall what I was wearing. Weird!

Oh, and Daniel F Bowen. I will guess Francis. What else could it be?

Roger: true, but if I’m paying all that money in interest, I might as well save $30/year. I’ll need every cent I can get!

Andrew: I could have wound him up I guess. Maybe another time, if I feel so inclined. And yes, it’s Francis.

Did you give the guy on the street any money?

No, for two reasons… firstly he wasn’t asking for any, nor was he in any state to receive it (basically unconscious). Secondly I generally don’t give money to beggars on the street; money to them from me goes via the Salvation Army or other charities, where I believe it is less likely to be spent on things like cigarettes and alcohol.

You could always become a shareholder in your local community bank…being one of their bigger customers also helps :-)

My settlement is on the 23rd, but that’s not all, my middle name is Francis as well. I work in the city in IT and will be living in an eastern suburb.

Wadaya mean not spooky. You think it’s just a coincidence?

Funny story. Are Australian banks so desperate for business that all you need to do is take out a home loan and they go nuts?

Incidentally, I understand that if you make one additional (principal) payment every year over the course of your loan, you cut the payment time in half. At least that’s how it works in the U.S. and that assumes that you can pre-pay without any penalty.

Have a great day!

Fred – all decent home loans allow extra repayments without penalty – if you’ve got one that doesn’t, it’s a dud.

It’s true that making extra payments shortens the term of the loan, but it would have to be a substantial payment to halve the term.

The desireabilty or otherwise of making extra payments depends on affordabilty, the time value of money and whether you have a better use for it.